Editor’s Note: Due to the complexity of the Elves! deck, particularly the turn in which it combos off, some reporting mistakes were made during the course of this match. Specifically, Luis Scott-Vargas DID NOT make an illegal play by returning Eternal Witness to his hand with Wirewood Symbiote. Presently this match report will remain posted as it was originally published; the coverage team apologizes for any inconvenience. 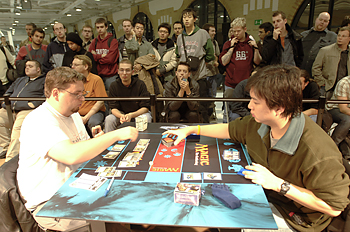 Going into the final round of the Swiss portion of the competition, few things were certain, and a whole host of talent was poised to battle for a place on the Sunday stage. Among them were Luis Scott-Vargas and Kiwanont Sukhum. As is frequently the case, things were a little messy with tiebreakers, but it looked likely that a win would mean a Top 8 berth for one of these two. For LSV, the pro points garnered by making his first Pro Tour top 8 would be hugely relevant. To put it simply, this was one of the biggest games of his life.

Where things got really complicated is that unbeknownst to either party, some unusual results were coming through elsewhere in the brackets. The expected draw from leader Kenny Öberg did not happen, and Tomoharu Saito, who was also a lock, decided to scoop to his opponent, allowing both of them a Top 8 berth. All of a sudden, this match was no longer win-and-in. It was win, and hope that Kenny Öberg succeeded in doing what he's been doing for most of the weekend, namely winning matches.

This didn't make things more complicated for either player here—each just had to win—but it did open the door to cruel misfortune of missing Top 8 even when they thought they were safe.

Kiwanont won the roll and had a mulligan, after which he led with Steam Vents and Lotus Bloom. Meanwhile, Luis had Heritage Druid to begin. Each player was running a combo deck, but operationally, there was a lot of variation in how each player would eventually reduce his opponent to zero. 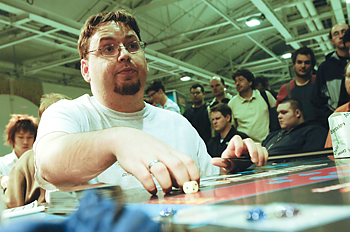 Can LSV's Elves solve themselves?

Another Lotus Bloom came from Kiwanont on the second turn, while Luis tried to go for it on turn two. He played a Glimpse of Nature, followed by Birchlore Ranger. The Elf was hit by Remand, though, stymieing his first attempts at a busy board. Nothing came from Sukhum on three, which meant that Luis was apt to try for something big the following turn.

The "something big" was Birchlore Rangers and Nettle Sentinel. Summoner's Pact found another Nettle Sentinel, and Luis went all in, playing a second Pact to find the third Sentinel. Having three copies of Nettle Sentinel, along with Heritage Druid, generating mana would no longer be a problem for Luis. He played an Eternal Witness, to get back his Pact and play it again to get Wirewood Symbiote. The Symbiote let him return Eternal Witness, allowing Pact #4 to fetch Regal Force, letting him draw nine cards.

In brisk and neat fashion, Luis built up progressively more mana in his pool, casting small elves more as mana production than anything else, enabling a Weird Harvest for 5. He played all the mana elves that he fetched, building up a prodigious storm count, and finally finished off with a Grapeshot for 22.

It's easy when you say it fast. Had there not been a Remand on turn two, it is likely that Luis would have got there for a turn-two win.

Kiwanont had a Lotus Bloom to start Game 2, but soon had his Mind's Desire stripped from his hand by a Thoughtseize from Luis. A Peer Through Depths helped him rebuild, finding a Firespout, but Sukhum wasn't quick to play it on turn three in the face of Llanowar Elves and Wirewood Symbiote.

A second Thoughtseize from Luis found a second Mind's Desire. Nice hit. He continued to hit in for 2 points a turn, and was satisfied to only lose a Wirewood Symbiote to Firespout when the sweeper eventually came down. 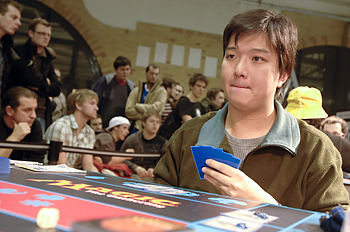 Sukhum waits patiently for Scott-Vargas to finish messing around and just kill him already.

LSV rebuilt with three Elves, and the following turn had a Regal force to draw four cards. A Glimpse of Nature seemed set to finish things. First Nettle Sentinel came down. Then Summoner's Pact found Heritage Druid. A pair of Birchlore Rangers came down, followed by Elves of Deep Shadow. Luis started a paper count of both his mana and the number of Summoner's Pacts he had played for the turn. A pair of Wirewood Symbiotes joined his side, and the LSV express just kept on a-rumbling.

An Eternal Witness got back Thoughtseize, which took Manamorphose from Sukhum's unexciting hand. Still more elves came down, and Luis had to remain a little more careful, as he didn't have the full crazy number of Nettle Sentinels to feel completely safe going off.

Weird Harvest for 4 soon fixed that problem. Two Nettle Sentinels, Heritage Druid, and Llanowar Elves joined team LSV. This seemed like a popular team to be on. Scott-Vargas gradually worked his way deeper into his deck, presumably at this point looking for his Grapeshot. He didn't seem to find it, though, and passed the turn with an incredible army of monsters in play. Having played so many Thoughtseizes, he could feel comparatively safe, but still, in theory Firespout off the top would spoil his day.

All that was on the top of Sukhum's deck, though, was a handshake.

Of course, the story was still far from over. With Kenny Öberg playing in the final round, there was the potential for LSV to miss his Top 8 slot if Öberg lost. At the point I came over it was Game 3 in what had been a very grueling control match. There were Chalice of the Void in play set at 1, 2 and 3. Time was close to being called. The match looked likely to be a draw, but Kenny had plans otherwise: his Tezzeret deck played out its namesake, three Chrome Moxes, and a Chalice of the Void set at zero. It then untapped two artifacts. Time got called, but not before Kenny could get in position to be able to activate Tezzeret's "ultimate" on the very last of the extra turns. Kenny won, and Luis Scott-Vargas secured his first Pro Tour Top 8.