Once again our team of talented journalists are on hand at the 2007 Pro Tour Geneva to bring you an assortment of updates. 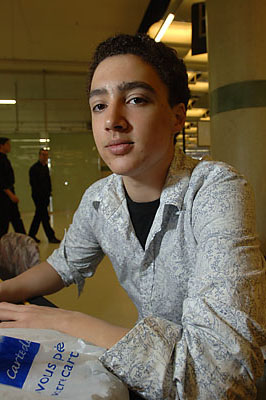 I was catching up with Julien Nuijten earlier today, finding out what the 2004 World Champion and 2006 World Team Champion has planned for this year. He went snowboarding for a couple of weeks before this event and has generally been enjoying life since he graduated from high school. He said he'd likely show up at Grand Prix-Dallas before his hometown Grand Prix in Amsterdam, where he will team with Johan Sadegphour. Travel plans later in the year likely include some quality time in Montreal around that Grand Prix and a visit to San Diego before the Two-Headed PT (where he will team up with Kamiel Cornelissen).

Antonino De Rosa popped in mid-conversation and asked "You went snowboarding? Shouldn't you be in school?" Obviously, Ant didn't know that Julien graduated at 16. "No college either?" Ant asked. Julien said, "Not right now. I'm not sure if I want to go." When pressed on the question of a job, the 18 year-old Nuijten said he's been playing a good chunk of poker on the side for spending money. De Rosa, who works hard as a game designer for a living, said, "Good luck supporting a family with that when you are 30. What does your mom think?" Julien merely pointed out that he made $52,000 when he was 15 playing Magic, and his mom has been pretty cool with things ever since.

The "soggy pickles" combo of Brine Elemental and Vesuvan Shapeshifter has been well documented, and has established itself as a Constructed-viable win condition these days. According to Pro Tour Liar Quentin Martin, though, he managed to get himself into a situation that is actually one step worse than being stuck without another untap step under this combination. It is entirely possible that the following sequence contains some amount of fabrication. Think of it like a dream sequence perhaps.

On top of the lack of an untap step, Quentin was manoeuvred into a position where he no longer had a draw step, due to his own Null Profusion and two uncastable cards in hand. Quentin being Quentin, he played it out for a few turns longer in the face of a rather bewildered opponent, but when the "draw, go" strategy turns into just "go," it just doesn't work very well. He lost that game.

Curious about Hoaen's Przemol answer, I asked him why he was on the list. It appears that Rich had no idea who is on that account, but it's the one that he can never beat on Magic Online. Thinking that I had heard of the name before, I asked Magic Online main man Scott Larabee about it, and he said that Przemol is the same account that won the E3 contest last year, and also the one that made the Rubin-esque trek to attend Worlds in Paris. "In fact," Scott said, "He's here." 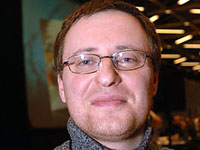 Perhaps more entertaining, after three drafts (including a brutal set of match-ups in draft 3, Hoaen found himself down in pod 6. Przemyslaw? Battling in pod 2.

Wandering the floor of the event, you can't help but run into cool combos left and right in this format, and that's just Limited we're talking about. So, in the spirit of my blog post from yesterday, here's another batch of combos in this format that will have even the spikiest competitor relishing the Johnny path.

This one was mailed to us yesterday by Adrian Bettridge after he read the blog. As he points out, this combo takes Thaumaturgist + Bewilder to a whole new level, tapping two creatures to kill virtually any creature without even using mana for the abilities! Adrian actually managed to get this in a draft, so he was happy to email us this improvement on my original suggestion. The downside is that the Sorcerer is rare, but Saltfield Recluse is a common substitute that can still do some nasty things with the Thaumaturgist.

I meant to post this one yesterday but got sidetracked while listing everything else. What's better than a kickass angel? How about a kickass angel for five mana? Just play Akroma as a morph and then abuse the Blink to cheat a late-game beater into the early game. They don't have to be the same turn, so something like turn-three morph, turn-four Blink is plenty easy. And because Momentary Blink is an instant, not only can you unleash a giant beater at a bargain price, you can do it at instant speed to tear down some hapless attacker that comes over oblivious to the danger! I still haven't seen this in draft yet, but when I do the wait will easily have been worth it.

Gauntlet of Power + Shade of Trokair

At the end of draft 3 I was asking around a bit to see if Gauntlet of Power just wasn't seen as that powerful. I love the card, but I keep seeing it go quite late, so I was curious if it was just a me thing. After that I headed back out to the floor to watch some games and saw Frank Karsten with this sick little combo in play. With just five Plains in play, Frank was threatening twelve damage from the Shade alone!

From what I heard in the coverage room earlier this morning, Tim Willoughby managed to pull off something similar to this in a draft. Jhoira's Timebug is obviously good with any of the time counter cards, and doubling the division speed on Chronozoa is already a huge deal, but being able to do it at instant speed (such as before blockers are declared) puts this one over the top. Willoughby's deck, in a similar vein, featured two Chronozoa , with two Fury Charm and a Timecrafting to ambush the opponent with extra Chronozoa .

This one came up in a conversation Kelly Digges and I were having in the coverage room yesterday. Got an awesome vanishing creature that's about to go and you wish you could keep it longer? Put the trigger on the stack to remove the last time counter, then play Ovinize on the vanishing guy. Next you resolve the trigger and remove the counter. The creature no longer has vanishing, so removing the counter doesn't kill it. Then at the end of your turn the Ovinize wears off and your Waning Wurm or other giant monster springs forth from its, er, sheep's clothing.

Fans of the old Hermetic Study / Horseshoe Crab combo may not have realized yet that the combo is back yet, given that Torchling 's a rare. Give your Torchling a whip and he's a machinegun ready to mow the board down. And you can add in Ophidian Eye or Keen Sense to draw a card each time in the process, since neither of them specify that they need combat damage. Throw in a Vampiric Link or Spirit Loop and you can make all the damage life drain instead!

Ok, no joke, I'm just finishing this up to send off to Kelly, and Greg Collins just walked into the room. "You know what makes your board look good? Two Gauntlet of Power and a Shade of Trokair . Karsten has that in play right now…"