PRO TOUR FACT SHEET Get the lowdown on the venue location, player registration, side events, and much more by visiting the Pro Tour-Honolulu Fact Sheet.

That is a commonly used platitude in all competitive fields of endeavor, but in the case of at least one Pro Tour-Honolulu participant the words rang true. I ran into PTQ winner Josh Witaanan on Sunday and he looked like he had been beaten with a happy stick. In addition to the free airfare he had won along with his elusive blue envelope, Josh and his fellow-qualified pals had found a hotel room for under $100 a night overlooking Waikiki Beach – and the blue surf crashing against it.

“I have to tell you,” beamed Josh. “If I make the Top 8 and have to choose between one last day on the beach and playing it out…I don't know which one I would choose. I'm not kidding.” 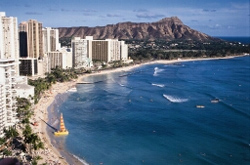 Photo by Joe Solem | www.hvcb.org.Pro Tour-Honolulu is the first Pro Tour to feature free airfare as a standardized prize to PTQ winners, so there should be plenty of similarly happy competitors who might not have been able to swing the rather expensive ticket on their own. Hawaii is also the first stop of the 2006 season; a season which take the Pro Tour to more exciting and glamorous locales than ever before. Apart from a day of competition at Worlds each year, it's also the first event to utilize the Standard format since 2000.

So what should you be looking for from the coverage team this weekend – aside from some sunburned Magic players?

Standard is a format that is going to be relevant throughout the year for Junior Super Series competitors, Friday Night Magic players, 8-person Standard queue denizens on Magic Online, anyone looking to attend Grand Prix in Madison or Hamamatsu, or any of the Team Unified Standard PTQs for Pro Tour-Charleston.

The format will certainly be a major focus for us this weekend. At the close of last season, the hometown crowd at Worlds in Yokohama turned the format on its ear with the unexpected debut of GhaziGlare. Frank Karsten plucked a Greater Good deck straight from his weekly column, and a group of under-the-radar South Africans forged Hatori Hanzo Tron and plunged it straight through the heart of the metagame.


The format would seem to be pretty well explored between Champs and Worlds but the addition of Guildpact not only offers 100-plus new cards but makes viable new color combinations by virtue of the new duals, signets, karoos, and guild cards.

Not only will the coverage team be bringing you feature matches, deck analysis, and meatgame breakdowns but over the course of the weekend we will be bringing you each and every decklist, like we did in Los Angeles and Philadelphia. That should give you the tools you need to do battle online, at the JSS, or alongside two teammates in the coming weeks.

You should also look for a video feature on a group of gamers that decided to make the most of their trip to Hawaii. A group of players that includes Gabe Walls, Jeroen Remie, Neil Reeves, Sam Gomersall, Antoine Ruel, Rich Hoaen, and Jelger Wiegersma all rented a house on the beach a month in advance of the event. All they have been doing for the past four weeks is hitting the beach and testing the format.

They have been living with a video camera provided by Wizards to capture the experience. Assuming there is any usable footage, you can expect to see their experiments with Guildpact Standard – experiments which have apparently been quite fruitful. 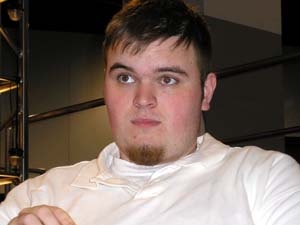 Obviously the details of the deck are under maximum security but you can certainly expect to see at least one of these housemates under the feature match spotlight in the early rounds on Friday. Remie informed me that he had tested for this event more than any other in recent memory.

That was actually a common theme among many of the players I spoke with in advance of the tournament. U.S. National Champion Antonino De Rosa is looking to show the World that his tremendous 2005 season, which saw him finish 15th in the Player of the Year Race and earn Level 5 Players Club status, was not a fluke.

“You have no idea how bad I want to win. I have been playing five days a week,” explained the national champion. “I have never played so much for a tournament in my life.”

De Rosa worked with a bi-coastal squad of players who all have TOGIT or 7 Kings pedigrees, including former U.S. National Champion Craig Krempels, Billy Postlethwaite, Alex Lieberman, Jon Sonne, and Gerard Fabiano. Despite all the money and Players Club security that comes with a high finish, those were not the factors that really drove De Rosa as he prepared for this tournament. 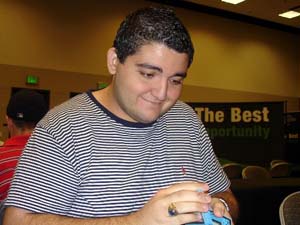 De Rosa hopes his hours of practice will pay off.“I want to win the Invitational ballot for North America,” De Rosa admitted knowing that he was chasing last year's winner of that ballot, Osyp Lebedowicz. “I was surprised by how I was second in the Road Warrior ballot so it gives me hope.”

De Rosa's rival for North America's affections has been working with a smaller cast than past superteams. Osyp chose to work for this event with a small group that includes underrated deck designer Andrew Cuneo, Josh Ravitz, Eugene Harvey, Adam Horvath, Chris Pikula, and Mike Flores (despite not being qualified for the event).

What is interesting to me about these two factions that were once (mostly) TOGIT is that there is still so much cross-pollination between the two squads. Ravitz is teaming with Lieberman and De Rosa for Madison and cross-squad friends (which is mostly everyone, with a couple of exceptions) tested decks against each other.

It will also be interesting to see this cross-pollination at work between Antoine Ruel of the Hawaii House and his brother Olivier, who has had little time to prepare for this event while jumping through hoops in order to acquire a U.S. Visa – something he has never had to do before, and which nearly prevented him from attending.

Olivier will be playing catch-up on the format with apparently blue-haired Pro Tour Columbus winner Pierre Canali – who is also driven by a desire to return to the Invitational – on the flight to Hawaii. Olivier has been testing the format a little with Alexander Peset, while Pierre has been working with French Pro Tour veteran Sylvain Lauriol.

Olivier may find himself in the unique position of being able to cherry-pick from the results of several teams, and the deck he chooses will certainly be one we pay careful attention to early on in the tournament. Also look for Randy Buehler to follow up on the Road Warrior's travails with the Visa department of the U.S. Embassy as he continues his wildly popular Pro Tour podcasts. 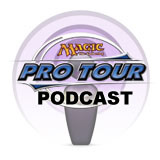 The podcasts are a great way to experience the sounds and energy of the Pro Tour in a way that has never been available through event coverage in the past. You can sign up to subscribe for the RSS feed by going here. Even though it is called a podcast, you do not need an iPod to listen to it. You can use your computer and listen to the files right from your desktop as you read the coverage.

You can also expect to find Randy tracking down the latest developments among the Japanese players who brought you GhaziGlare at Worlds. Tsuyoshi Fujita continues to be a solitary figure on the Japanese deck design scene, preferring to work alone (to his and Shuhei Nakamura's profit), but the other top pros have been pulling together.

Kenji Tsumura was the beneficiary of decks designed by both Itaru Ishida and Katsuhiro Mori en route to his Player of the Year title last season. Through him the two deck geniuses have been exchanging ideas and playtesting results, harnessing more of Japan's top designers together for this Pro Tour than any event in the past. The domination of GhaziGlare at Worlds will be hard to top but if any cabal of designers can do it is this one.

Jon Becker, recovered from his foot injury that kept him from Worlds, and the behind-the-camera John Mortensen will return to the Pro Tour floor this event to bring you the sights of the Pro Tour. They will be taking a trip to the Hawaii House on Thursday and will be roaming the aisles in search of first-person accounts, deck demonstrations, and I am sure some beach footage to make everyone sitting at home in Winter gnash their teeth with envy.

Don't forget the blow-by-blow coverage from the all-star squad that includes Ted Knutson, Aaron Forsythe, Scott Johns, Blisterguy, Mike Flores, Craig Gibson, and myself. We will be bringing you all the deck tech, developments, blog-worthy stories and photos, and player profiles that you would expect from such a fine veteran crew.

The coverage will cap with a live webcast featuring Randy and Mike. It all kicks off Friday afternoon on the East Coast. Keep your browser pointed to magicthegathering.com all weekend as we bring you all the information you will need on the new Standard format and the players who play it.