With Eivind playing first, it was Bram who started things off, playing Soulcatcher on turn two. Eivind's turn three saw a targetless Cartographer enter play, and a turn later, after it had attacked for two, it was joined by two Acorn Harvest-produced Squirrel tokens. 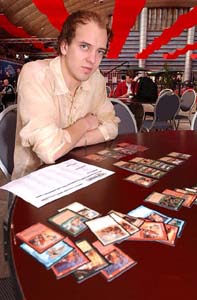 Bram, still lacking for black mana, played his fourth non-black source and cast Aven Fisher, whose flight could eventually help the 'Catcher get bigger, and a turn later, after Eivind had flashed back the Harvest, Bram drew and laid a land, saying 'Swamp!', then attacked with both flyers, taking Nitter to thirteen life. Bram tapped four lands and played Mystic Zealot.

Eivind's turn saw a massive attack, with all four Squirrels and the Cartographer attacking. Bram blocked the 2/2 with the Zealot, but Eivind had Rites of Initiation, discarding five cards for 24 points of damage. Bram had Pay No Heed in hand, but it would only have prevented six points of damage. 'That was easy' is all Eivind had to say.

"It's a tough life getting up this early to play in the Pro Tour" Eivind said between rounds. I replied, "yeah, but the $20000-$30000 you'll get should make it worthwhile. Actually, I think I'd wake up every day for that much money" to which Eivind replied "I don't know...I think I'd still sleep in on Sundays". One of a kind.

Bram chose to play first, almost instantly regretting it as he was forced to take a mulligan. Bram once again had a second turn play, with Angelic Wall setting up a pre-emptive barrier that was followed by Skywing Aven. Eivind Firebolted the Aven for some time advantage as he failed to play a Forest for the third consecutive turn, but on turn four, after Bram had played Aven Cloudchaser, that all changed, with the Forest allowing Eivand to play Acorn Harvest.

With three cards in hand, Bram cast the discarded Deep Analysis from the graveyard, then played his first Swamp and cast Skywing Aven again. The two Harvest Tokens attacked, dealing one as the other was blocked by the Angelic Wall, and then Eivand played a big problem for Bram's deck in the form of Chainflinger .On Bram's turn, the two flyers attacked and were joined by a second Cloudchaser, meaning the Flinger would be sticking around for a while as the score became 16-14 in Bram's favor. Bram then cast Hypochondria with one card left in hand and passed the turn.

Eivind attacked and shot the Skywing Aven, Muscle Bursting the token blocked by Angelic Wall, then casting Diligent Farmhand and passing the turn. The two Cloudchasers attacked, leaving the Norwegian with ten life and a growing problem in the form of the two flyers protected by Hypochondria. As if that wasn't enough, Bram then cast Mystic Zealot, a huge obstacle for Eivind's 1/1 creatures. Eivind's only response was to cast Squirrel Nest and pass the turn. 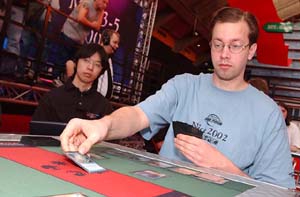 Bram drew and attacked for four with the Avens, leaving the Zealot back to hold off the opposition. Then, sitting at six life, Eivind drew and relinquished the turn despite having four cards in hand. Bram's turn saw him attack with just one Aven, holding the other back in case of the Rites, with Eivind dealing a point to the Dutchman with Chainflinger and making a sixth creature with the Nest.

Eivind untapped and drew, and after declaring his attack step cast Temporary Insanity on the defensive Cloudchaser. He then attacked with everything, waiting for Bram's blocks before casting Rites of Initiation for three for a total of twenty points of damage, with Bram's one remaining white source of mana not enough to save him for a two game deficit.

With a big smile on his face, Eivind showed me the Forest he was sideboarding in for a Mountain in his deck. He was doing this because he'd drawn far more Mountains on the day than Forests, when Forests were what was needed to make his deck run in the early game.

Playing first, Bram elected to mulligan for the second game in a row, but he came out of it ok, playing Plains, Swamp and Hypochondria in his first two turns, to which Eivind answered with Mountain, Forest and Skyshooter. Next, it was Aquamoeba and Cartographer hitting play before Bram cast Deep Analysis, effectively eliminating the detriment created by the mulligan.

Eivind attacked to do one point of damage, but the turn was ended without playing a land. Bram cast a second Deep Analysis then went to 18 with Eivind's next attack, but a third Forest allowed the four casting cost creatures to start coming out, with Nantuko Disciple being the first. For the third turn in a row, Bram cast Deep Analysis, this time from the graveyard, to which Eivind remarked 'He's got to have a lot of lands. Maybe eight of them'. Bram replied "it's a lot of lands, but not eight" and the two chuckled, staying friendly despite the severity of the situation. Bram then cast Skywing Aven and passed the turn, with just six cards left in hand.

Eivind attacked with the Cartographer, with the Disciple forcing the discard of a Swamp to Hypochondria before he played a second Mountain and cast Possessed Centaur. Despite his massive card advantage, things didn't appear to e going well for Snepvangers, who was now at fifteen. He untapped and attacked with the Aven. He then cast Deep Analysis for the fourth time, with the payment of three life virtually eliminated by discarding one card to Hypochondria. Bram could then only muster Soulcatcher. 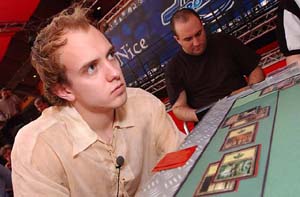 Eivind's turn saw him attack with all of his creatures except Nantuko Disciple, which was held back to pump. Aquamoeba blocked Cartographer and each was saved in sequence by the Disciple and Hypochondria, taking the score to 18-11. Eivind then cast Nantuko Calmer and passed the turn.

Bram tried building up his defense with Angelic Wall, leaving himself five mana. Needing to solve the Disciple problem, he discarded Psionic Gift in casting Waste Away and looked to have established come sort of control over the table. Soulcatcher attacked, to which Eivind remarked "Ya, I'll eat him", and the score went to 17-11.

With each turn taking longer than the last, Eivind finally decided to attack with the Calmer, Centaur and Cartographer. After Bram blocked with Aquamoeba, Angelic Wall and Skywing Aven respectively, Bram returned the Aven to his hand, discarding Dematerialize with Cartographer dying in the melee. Bram then untapped and drew, recasting the Aven, after which Eivind cast Elephant Ambush "That's not as bad as I thought" mused Bram "it could have been a Beast Attack"

Once again, large green creatures attacked, but this time, Bram had an answer for one of them in the form of Ghastly Demise, targeting the Centaur, but Eivind responded with Muscle Burst and Rites of Initiation for three, making the Centaur black with threshold, with the end result being the Elephant growing to 6/3, the Calmer 5/3 and the Centaur a frightening 10/7 trampler. Aquamoeba, pumped by Bram's last card in hand, pumped and traded with the Elephant, Skywing Aven died to the Calmer and Bram went to one life.

Eivind may have made a big mistake this turn. With Beast Attack in his graveyard and likely using all of his mana up next turn, he probably should have cast Acorn Harvest from the graveyard, but instead he passed the turn. Bram then drew and Dematerialized the Centaur, tapping out to do so, with the Wall dying the next turn to Skyshooter, making Soulcatcher 3/3 as the Centaur came back into play. Next, Eivind drew and cast a second Harvest, then recast it from the graveyard, then on his next turn played Krosan Archer and recast the first Harvest. Finally, one turn later, Eivind attacked with everything. Bram sat and stared at the nine creatures coming his way and the one he had to block with and despite the existence of Hypochondria, had to be knowing that sinking feeling that very few have: that inspired by losing a Pro Tour final. He cast Gallantry as a last attempt to regain a foothold, drew, and finally conceded, making Eivind Nitter the true European Champion.