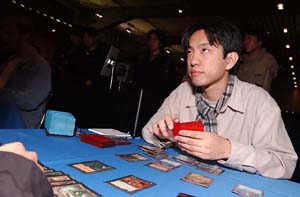 Tsuyoshi FujitaThe trip across the Pacific was just too much for many competitors, meaning that a scant two hundred seventy showed up to do combat in Odyssey Block Constructed. Of those, one hundred seventy five will have the day off tomorrow.

Going into the tournament, the consensus among the pros was that there were very few tier one archetypes. There were disagreements about the best way to construct those decks, but all told there was very little "tech" to be uncovered. The best cards were easy to identify, and there just weren't that many way to put them together.

As Day 1 progressed that seemed to be the case. The most-represented deck was blue-green aggro-control, differing mostly on their decision to head to threshold or not. After that came the mono-black control deck, powering out monster spells with Cabal Coffers. Close behind was blue-black, running Upheaval-Psychatog and backed by the drawing power of Compuslion.

After those three, there was a lot of diversity. The only thing players seemed to agree on was the unplayability of white cards that were not Mystic Enforcer. All told, more Deserted Temples were being played than plains!

Of course, those appeared in some of the mono-green decks to take better advantage of Squirrel Nest. However, those decks didn't fare so well in practice. One need look no further than Jon Finkel, who posted an ignominious 1-3-drop.

Also posting an unspectacular record was Alex Shvartsman, whose four-part series on Sideboard.com kept track of his testing for this event. Though the final chapter lists versions of all the popular combinations this weekend, Shvartsman himself took mono-black control to a disappointing 3-3-drop.

It wasn't all doom and gloom, though. Standing above the rest after seven rounds were Tsuyoshi Fujita and Jens Thoren, who battled their way to perfect records. For Fujita, this could fortell a return to Top 8 competition. Does his strength lie in Block Constructed, or is it his home turf advantage? Thoren is also no stranger to the spotlight, most recently showing his stuff at Pro Tour - San Diego where he finished second. 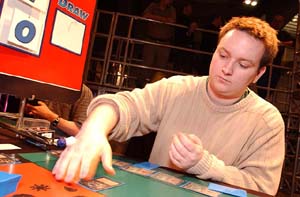 As amazing as Japan's work was, France outdid them. Olivier Ruel led the way in third place, followed by three more in the Top 16 and four more in the Top 32, including such high-profile names as Wilfried Ranque of Metagames, Nicolas Olivieri of Les Plus Class, and invitationalist Antoine Ruel. Four more French players squeaked in at 4-2-1. In fact, literally everyone at 4-2 after Round 6 opted for the sure thing and drew their way into Day 2.

Sadly, the grand experiment of the Magic Colony did not put up a blockbuster finish. Their blue-red-black deck, designed by Ben Rubin and Brian Kibler only put one Colonist, Brian Hegstad, into second day. Both Rubin and Kibler got the needed 4-2-1. Ken Ho and Jeff Cunningham broke with the group to run the blue-green aggro-control deck, and both made the cut as a result.

They were overshadowed by Your Move Games, who showed up playing mono-black, and put four players across. Peter Guevin and Rob Dougherty both stand in the Top 8, and Darwin Kastle and Justin Gary are in the Top 32.

So there's plenty going on as we move into the second day. Mike Turian, currently languishing in eighty-fifth place has declared himself "Guaranteed Winner" of this Pro Tour. Liar or no? Tune in tomorrow.