Once again our team of talented journalists are on hand at the 2007 Pro Tour Yokohama to bring you an assortment of updates.

So I was chatting with Rob Dougherty this morning, and I congratulated the Hall of Famer on making Day 2. He said that he probably made a mistake by playing the wrong deck here this weekend and that he would have been much happier to play his anti-control deck and then get a draw in the first round. As it was, he played blue-black and got a draw anyway in the second round, and thus found himself lamenting the fact that there was now no way he'd end up getting the beatdown matchups that his deck was tuned to beat.

Doing the math, I stopped him and asked for his final record. Rob said, "I ended up 4-1-3 with a draw in the last round from a generous opponent who already had 15 points." "So you drew yourself out of the draw bracket but still into Day 2?" Rob thought for a second and said, "Yeah, I guess I did. Maybe I can stop playing all control decks now!"

by Ted Knutson with photos by Craig Gibson 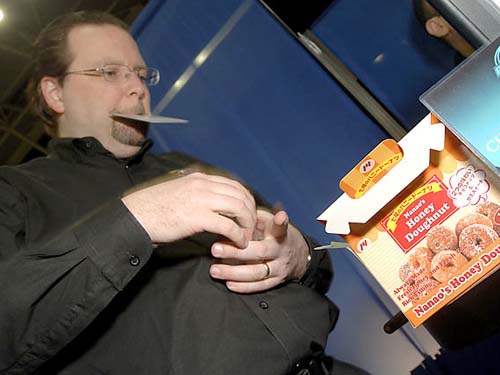 Scott Larabee shows how he maintains his svelte figure. 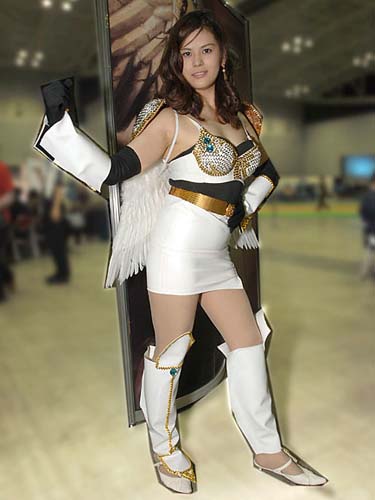 Just one of the many reasons why Magic in Japan is awesome. 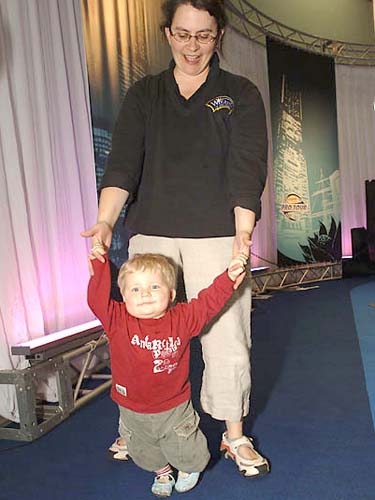 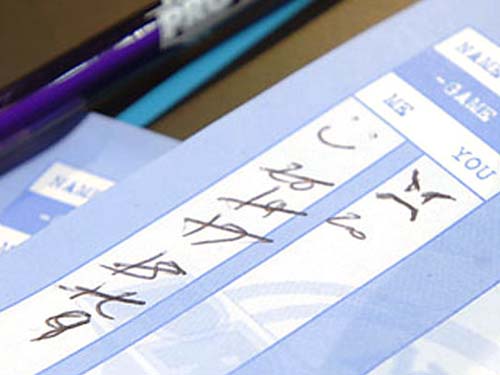 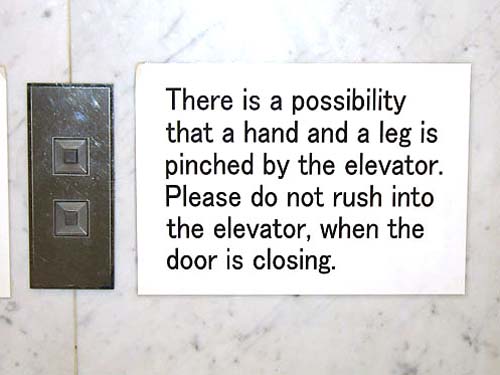 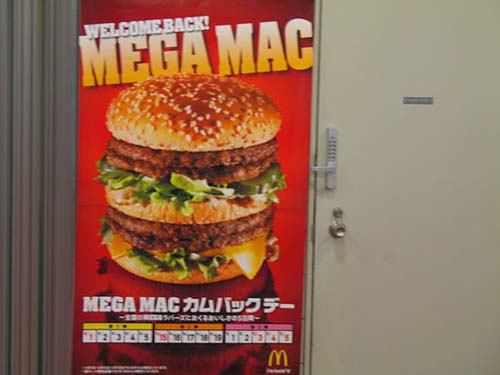 Loose Translation: WARNING! Eating this will be hazardous to one's health. 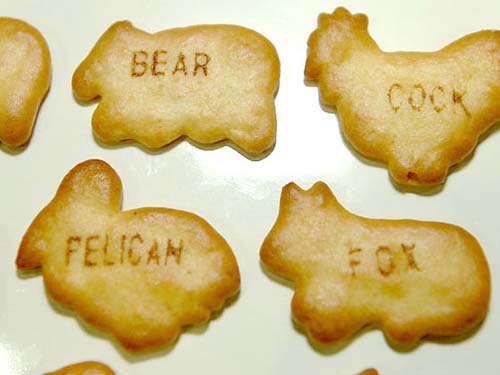 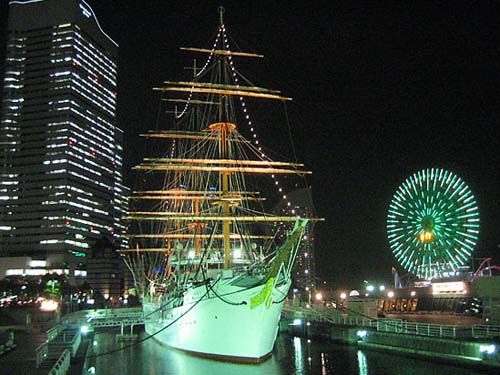 Yokohama at night is rather brilliant.


Last night there was a future Future Sight sighting.

Those of us lucky enough to be on the coverage team for Yokohama had unfortunately signed away our time during the entire Prerelease weekend, but serendipity stepped in, and miraculously, around midnight, packs appeared for an unsanctioned Time Spiral - Planar Chaos - Future Sight draft. The fact that it was unsanctioned meant that we got to draft with various Wizards of the Coast staff, including Mr. Devin Low, who, somewhat unfairly for this draft, had already seen the cards for our pre-Prerelease playtime, thanks to having been a designer on the set.

Never have Time Spiral and Planar Chaos been drafted so quickly, or with as little idea as to archetypes. For the likes of BDM, Richard Hagon, Pro Tour photographer Craig Gibson and I, these were packs we were all pretty familiar with, but there was no real way to know how they would fit in with what was to come. The other half of the draft had Wizards staffers Greg Collins (Grand High Poobah of Event Coverage), Kelly Digges (Sub-Grand High Peon of Event Coverage, with the power to edit his job title as necessary), Noah Weil (Development Intern) and the aforementioned D-Low (designer on Future Sight). I'm guessing that each of them had some idea of what was coming.

There were a few speculative picks running around. As is his wont, BDM was all about forcing Slivers, in the hope that he'd get there with some fun in Pack 3. As it happens, he lived the dream and won with both Sliver Legion and Virulent Sliver in separate games (and once with both on the board). Meanwhile, I found myself picking Timecrafting pretty high, in the hope that there would be some suspend juice in the final pack that made it worthwhile. I already had a Stormbind and a Disintegrate from Pack 1 (BDM took Vesuvan Shapeshifter over the burn spell), so I was pretty happily red, and I got some sort of a hookup with an Arc Blade that turned out to work like Stormbind number two when helped out by Jhoira's Timebug, an insect whose power has increased greatly over time. Of course, when my pair of 'Binds faced off against Devin's Lumithread Field, I was a sad monkey, but still, taking a game off the set's designer still feels pretty good.

Despite (or perhaps because of) Devin's valiant leadership, his team succumbed to the force that was Team Noah/Craig/Kelly/Tim. The main story from our first draft? It was a great deal of fun. With so many new keywords, playful spins on old mechanics, and the wacky new borders (I literally almost fell of my chair when I saw Blind Phantasm… and cannot begin to imagine how cool it must look in foil), Future Sight has a lot going on.

Tonight's draft is going to be fun… All of a sudden we have half an idea of what we want to try to do. I'm looking forward to more Future Sight.


Some deck designers are people who cut their own decks from whole cloth, imagining and then tuning their designs to perfection before gladiatorial battles on Magic's largest stage. Others are brilliant idea men, but have problems when it comes down to the fine details, while still more are like BASF-they don't make the decks you play, they just make the decks you play better. We decided to check in with some of Magic's best tuners and designers to not only examine the final product, but also ask them which card was the final one that made the cut for the decks they are running this weekend. 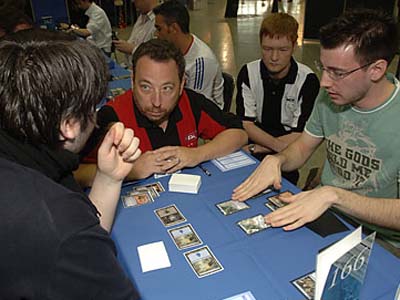 Head Judge Sheldon Menery listens as a player explains his side.

I caught up with Head Judge Sheldon Menery during a rare lull in the Pro Tour action. He was nice enough to share his experiences as Head Judge of Pro Tour-Yokohama, common rules questions, his favorite Future Sight cards, and more.

Q: We've just started Round 14 of this 19-round event. How would you say the tournament has gone so far?

A: The tournament's gone really well. Yesterday we were an hour plus ahead of schedule, which is extremely rare for pro tours. We're still thirty minutes ahead today, which is even more impressive considering a 30-minute ruling along with some slow play infractions at the end of Round 9. I would say this is the single smoothest Pro Tour I've ever been to.

Q: What are the responsibilities of the floor judges of the event?

A: The judges' main responsibility is to have a speedy round turnover. They've done a great job with this. Their big skill this weekend has been making the quick rulings when needed. I attribute it to a really strong judge mentorship program in place now. It really helps the judges know what to do before showing up. That kind of experience really shows. The players should also get credit for knowing what they're doing, and not being argumentative when they get a ruling they disagree with.

Q: In the past some players were known for picking on an indecisive judge and getting a ruling that favored them. That's no longer true?

A: That has been a problem before. These days, the Pro Tour judges get more training which gives them more confidence when making a ruling. Those players don't have the toehold of a wavering judge to debate with. Right now most players listen to and agree with a judge's ruling. There are still appeals of course, but there's a lot less getting the floor judge to change their stance on a ruling.

Q: Are there any special challenges to running a Pro Tour in a foreign country?

A: Not so much for us. The side events area can have some problems with the language barrier, but the fact that most pros speak some English really helps. The judges are on top of language issues that could pop up.

Q: Speaking of, I heard one player was ejected for trying to cheat using the language barrier.

A: Yes there was one player who tried to obfuscate and take back moves using the language barrier. We came over to investigate, and he attempted to deceive the investigating team. He was discovered changing his story, so he was disqualified without prize.

Q: Moving on, have there been any common rules questions this weekend?

Q: Any rules issues the PTQ players should watch out for this season?

A: Yes! Make sure the guy you're playing face down actually has morph!

Q: How many pros made that mistake this weekend?

A: So far four separate players have played the wrong card as morphs.

Q: What's the penalty for that?

A: It's a game play-game rule error, which is usually a warning. If a player immediately notices they played the wrong card and calls a judge over they'll probably get a warning. However, considering this involves hidden information and the potential for abuse, if the situation is caught later it can be a game loss.

A: Angel of Salvation. I love the flash with convoke. She's going straight into my Elder Dragon Highlander deck. I also really like Venser, Shaper Savant for his ability to stop uncounterable spells. Must stop the Obliterate!

Q: Thanks for your time, Sheldon! Any last words?


The coverage staff wanted to give respect to robot and baby-killer Frank Karsten, who, despite looking like death warmed over, is actually playing some of his best Magic in a year. If Frank feels anything like he looks, he should probably be in bed and doped to the gills on antibiotics and pain killers, but instead he's out there crushing dreams and piloting the Dutch control deck to another possible Top 8 finish. Good luck to you, Frankie-it takes a lot of guts to grind out a day like today. 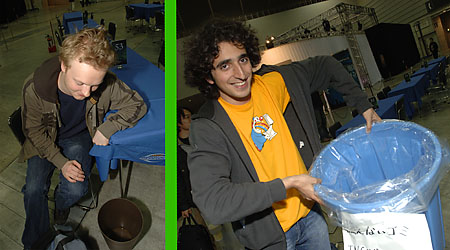 Frank Karsten has literally been playing with a bucket at his feet all day, while Gabriel Nassif sports a decidedly unsympathetic t-shirt.


You may think that the life of a coverage editor is all glitz and glamour (at least, I sure hope you do), but in fact I end up spending a lot of time in a back room away from the action. 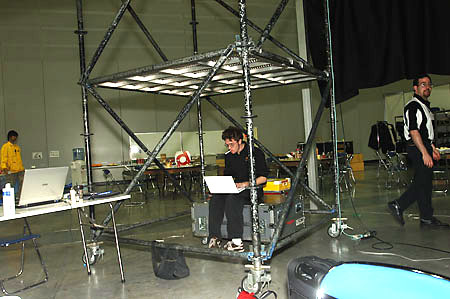 They do let me out occasionally.

On one of my rare forays out of my editing cage in the coverage area, I chanced upon a rather unusual game in progress on the giant play mat reserved for the Colossal Game later in the day.

It seems that Frenchmen Sebastien Perez and Davy Loeb, noticing that the gigantic feature match mat wasn't in use, decided to square off on the oversized board-with their absurdly normal-sized decks. Of course, the Pro Tour play mats are marked quite specifically with the various zones, so Loeb and Perez put their libraries in the appropriate spaces and their lands about ten feet away, with a long hike to the red zone. 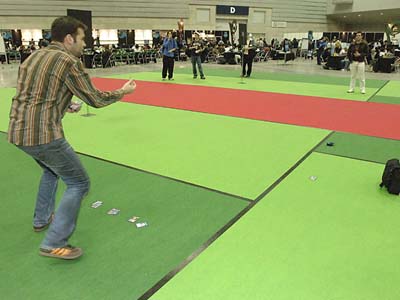 They played at high speed, sprinting back and forth from their decks to their lands and shouting out their plays to each other as this peculiar exhibition game unfolded. I couldn't stay to see how things turned out-duty calls almost as loudly as coverage manager Greg Collins does-but I was struck by Perez's rubbery physicality, Loeb's banter with the French players watching from the sidelines (which I couldn't follow but didn't really need to), and most of all by the ability of Magic players to find an offbeat way to have fun and cause a scene. As Magicthegathering.com site manager Scott Johns often says to me when I ask for input on how far we can push jokes on the site, "We make a game. It's supposed to be fun."

Not that this didn't look like work, too; with all their sprinting and shouting and histrionics, Loeb and Perez were definitely getting some exercise.