Once again our team of talented journalists are on hand at the 2007 Pro Tour Yokohama to bring you an assortment of updates.

Hello my friends, and welcome to Pro Tour–Yokohama 2007. It's been a year and a half since Katsuhiro Mori and the rest of the Japanese swept the titles here at Worlds 2005, and this trip finds us looking at the world's introduction to Time Spiral Block Constructed. While many of you will be attending tomorrow's Future Sight prereleases, competitors here are only allowed to work with Time Spiral and Planar Chaos, but that doesn't mean the new format isn't fascinating.

Coming into this weekend, the community was abuzz with the fact that 8(!) White Weenie decks made the Top 8 of last week's Magic Online 4x, including one piloted by noted white lover Willy Edel (see the Geneva coverage for more on that story). I don't know how much that affected the field composition, but an early look showed that while weenies were present, they were just as likely to be red or slivery as white. Blue control decks are also here in force, and it will be interesting to watch the battle between the weenies, the more mid-range red-green decks, and the many flavors of control that seem to be present. Look for more updates on what's out there and what is doing well throughout the weekend.


"Card Advantage or No" seems to be the competitors' question of the day. Decks are falling into two very stark categories. On the one side are decks that eke out card advantage though Aeon Chronicler s, Mystical Teachings , and Damnation . Opposite that style are the decks that just don't give a #$%# what an opponent is doing. Emphasized by the suite of burn spells and the preponderance of efficient weenies, these decks are either base white or base red. The white decks are nearly always mono, with your Shade of Trokair , Calciderm , Icatian Javelineer, Knight of the Holy Nimbus , and Griffin Guide bringing the brunt of the offense. Red decks, on the other hand, have much more deviation. Decisions such as whether to add green ( Stormbind , Timbermare ), add black ( Void ), go mono with extra burn ( Browbeat !), or tech out against the white decks ( Sulfur Elemental , Wildfire Emissary ) are pieces of minutia with no obvious solution. While the white decks are fast, hard hitting and reliable, it may just be the red decks that offer the most potential to players who best navigated the potential iterations. From our cursory walks around the playing floor, red decks did seem more popular for the higher ranked competitors than white weenie.

Opposing this blind offense are the card advantage decks, which as you may expect come in many forms. Interestingly, red control decks seem to be just as viable as their aggro brethren. Whether they're red-blue or red-black-blue, Bogardan Hellkite and sometimes Red Akroma are the kill spells of choice. Another very popular control style is blue-black control featuring Teferi, Mage of Zhalfir and Shadowmage Infiltrator . Using the potent Damnation to control a rush, these decks lock down the pace of the game while continuously drawing more cards than the opponent. Look for these decks to remain consistent performers as the weekend continues.

Finally, there are decks that don't neatly fit into the aggro/control dichotomy. We've seen some people playing around with Blink Riders, a red-blue-white deck that uses Momentary Blink with Avalanche Riders , Riftwing Cloudskate , and the occasional facedown Akroma, Angel of Fury . There are some four- and five-color builds out there, using the best mono and gold cards of each color to craft the perfect defense. These decks use Search for Tomorrow and Prismatic Lens to get their mana aligned, after which the bewildered opponent has no idea what to expect. Mystic Snake into Void into Mystic Enforcer ? There are evening four- and five-color Sliver builds using Wild Pair to power out the swarm. These decks promise a lot of variety for their bold captains.

Clearly there is no consensus yet for best deck of the format. As the weekend rolls on, the strongest archetype might appear, or the tournament may just go to who can pilot their own creations better than the next guy. Whatever happens, check back here for updates all weekend of what should be an exceptionally exciting event.


Those of you who have been playing the Standard format for the last two years have been living in the era of free love and easy mana, but the shredded reality of Time Spiral Block Constructed lacks all those Ravnica goodies and provides very little in the way of replacements. This has led players here in Yokohama to do some interesting contortions just to play spells in certain two-color decks.

The most egregious offenders in terms of mana difficulty are the blue-black decks that want to play spells like Sudden Death and Teferi, Mage of Zhalfir in the first five turns of the game. Dreadship Reef s help that a little, though they are clearly inferior to Watery Grave s, while Prismatic Lens es are practically ubiquitous in any deck classifying itself as "control," and almost everybody has Terramorphic Expanse . Phyrexian Negator is another hit seeing a lot of play in the control decks, but I think Urborg, Tomb of Yawgmoth is perhaps the most creative, especially when it comes out of a deck that is otherwise not playing any black-producing lands.

On the other end of the spectrum, you get players who have decided to play it safe and run monocolored decks. These are almost exclusively beatdown decks like White Weenie and Mono-Red, but one famous Japanese deck designer (we'll tell you who it is tomorrow) threw up his hands at the whole thing and is running a monocolored blue deck that's a definite departure from what you see in the rest of the field. As always, we have to be careful about spoiling what individual players are running this early in the tournament, but check the Tournament Center feed with Randy Buehler and BDM for more deck tech lowdown today from some of the coolest decks in the field.


I've been a fan of Seshiro Ohkubo's work since he was first introduced to the Magic world back at Worlds 2004. His 3-D card creations were stunning and new when we first saw them, and his skill has only improved since that time. For this weekend, Wizards of the Coast contracted him to make a 3-D version of the Japanese Prerelease poster, which just happens to feature a card called [censored until the Prerelease]. Ohkubo worked on it at home in Nagoya for 10 days and completed about 80% of it, but ran into an issue when he realized that he'd need to have it shipped cross country. You see, the 3-D version of [still censored] is so large that none of the shipping companies in Japan would accept the package. Eventually Japanese OP manager Ron Foster contacted an art delivery company to drive it here to Yokohama in time for the show. Here it is, in all its glory. 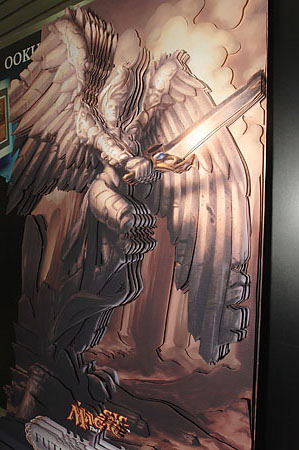 I already have a 3-D foil Time Stop sitting on my desk at home from the Japanese master… I wonder what I'd have to trade to get to put this into my collection as well. Furthermore, if Ohkubo had that much of a problem getting it to Yokohama, I wonder how I would get the lovely angel home… 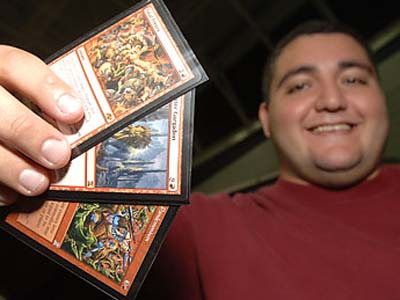 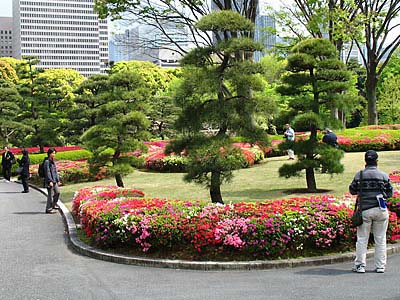