Experience the intense excitement of Professional Magic from the perspective of accomplished pro player Craig Jones as he plays and writes his way to the Top 8.

Hello and welcome to the latest edition of the Professor's Field Journal, where I give stirring accounts of never quite finishing anywhere. 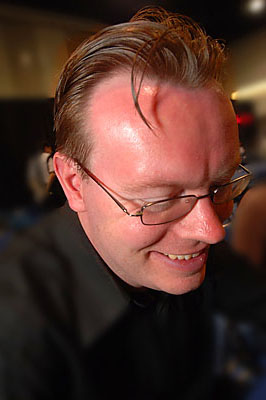 Currently I'm in San Diego and it's the morning of the Pro Tour. I'm also sunburnt to the kind of redness you'd expect after leaving a lobster in a microwave for a couple of hours. That will teach me for leaving my pasty British skin out in the sun for too long while drafting.

Personally I blame Rich Hagon for dragging me out in the sun to tell everyone on video that I am in fact old enough to have been playing since the stone age.

The format for the weekend is Two-Headed Giant Limited, for which I'll be ably assisted by my partner in dastardly deeds, the delectable Faieza Saleem.

The last couple of days we've been doing a few practise drafts with the Brits and Irish at an apartment a couple of blocks away from the venue. Rather bizarrely, we haven't lost yet. I'm sure this is a reality anomaly that will be corrected come the day of the Pro Tour, but I'm having fun while it lasts.

Two-Headed Giant Draft is a lot different from normal Draft in that the card evaluations are completely different from normal draft. Cards like Mindstab and Grapeshot move up from okay picks to must-haves and efficient creatures like Benalish Cavalry suddenly find themselves on the bench most of the time.

I also like to be greedy in this format. Really greedy. Yesterday I had a Magus of the Future (casting cost

) in play along with Forests, Plains and a Swamp! My other rules are pass no bomb and no dragon is left without a home.

Mostly I'm intending to have fun. The best-of-one aspect of Two-Headed Giant and the "assemble a Sealed Deck" nature of draft means it can be quite random, so I think it's probably best to shed the competitive side, have a little fun, and see what comes. No sense in getting too frustrated about what happens.

Oh, and did I mention I'm 7-0 in practise drafts (mainly because Fizz and I conveniently had to go for the video shoot rather than play against Stu Wright and Dan Jenkins's double Pyrohemia deck)?

The first draft was a little disappointing, but as the boosters seemed a little underpowered overall it may just be that everyone at the table had weak decks.

The usual strategy is to try and assemble the best "Sealed Deck" by taking the best two cards from each booster. However, I do have a little pet strategy where you force white quite heavily and wreck your opponent with Ivory Giants. I got two giants from Time Spiral, but not really enough white.

It was pretty much the story of the draft as each potential avenue didn't really materialize.

We dropped into green with some nice fatties including Jedit Ojanen of Efrava and Nacatl War-Pride. I paired that with white to get maximum use from Thrill of the Hunt. That's our creature deck. Basically we charge them with early drops and hope to finish them off with shadowy Fatties or maybe the Jodah's Avenger and Ignite Memories from my deck.

My deck is a little scrubby, unfortunately, and I was forced to run Liege of the Pit as a random Grey Ogre that might draw a removal spell because it's a morph.

If we go first and get a fast start we might be okay, but otherwise I feel we're probably a little weak.

1 Judge Unworthy 1 Thrill of the Hunt

1 Sunlance 1 Thrill of the Hunt

1 Liege of the Pit

This is the third time I've been paired against Rasmus Sibast in the first round of a Pro Tour and the fourth time overall. I'm currently 0-3 so I'm hoping Fizz can be my lucky charm to end the misery.

Our decks are a little weak as removal was scarce overall in the draft so our plan is to throw little green men at them until they hopefully fall over.

Unfortunately a pair of Penumbra Spider and a very slow hand (after a mulligan from Fizz) stymied the beatdown plan. This left a backup plan of Nacatl War-Pride, but they were comfortably able to shut that down with a Rebel chain that fetched two Trappers.

The game was all about the Trappers. Even though they had the ground and air locked up with Spiders and an army of Sprouts, we had a Spirit en-Dal that could have given us an avenue through the shadow realm if they didn't have the trappers to shut us down.

I tried to use Aven Augur to bounce us a path, but on the one turn it looked like there was an opening, they unmorphed Coral Trickster to keep the War-Pride at bay.

We were locked out, and eventually a Veiling Oddity ticked down to kill us with an army of unblockable Saprolings.

I was worried given the slow pace of Two-Headed Giant whether I'd have enough time to get the blog in.

No worries this game.

I got Fizz to keep a two-Forest hand that included Durkwood Baloth and Thornweald Archer. She drew two more Archers, so we sent them in and I added a Prodigal Pyromancer for support.

They played Rough to Wrath our board and followed up with Elephants and 3/3s while Fizz failed to make a third land.

In all the game lasted approximately seven minutes.

As they say…. That's rough.

This one went much better. We opened Volcanic Awakening and Mindstab and were then passed Tromp the Domains. After then it was fairly straightforward as we drafted for a black-red removal deck and a three-colour green deck with white and blue.

Vorosh in pack four sort of complicated things. Well, not really. "We shall pass no Dragon."

Sure, we'll throw it in the green-white-blue deck with an extra swamp. The same deck that also has triple green for Nacatl War Pride. Man I'm greedy, but oh boy is that Tromp going to hit for a lot if it connects….

No lives left in Round 3.

I think I know how to draft and play this format. I sort of do okay when I play it outside of the Pro Tour, but on it, oh boy I think Teferi and crew have my number and several 800 lbs. gorillas holding my family hostage.

We've got good decks now though. We can pull it back.

This was an odd one as both Tanaka and Okuda led off with successive Plains.

Both playing mono-white? These crazy Japanese.

Well, it wasn't quite mono-white. One of them was playing blue and the other green. It didn't really make too much difference to the Sunlance I was holding in hand. Never expected that to have no targets in 2HG.

Fizz killed stuff as her deck was supposed to. This included an Oriss, Samite Guardian, which they replaced with a backup, and we took it out of action with Melancholy.

It came down to their fliers in the end as they just had too many of them. Fortunately they cast Utopia Vow on my Lucent Liminid, so I could now actually cast Vorosh, yippee.

Unfortunately we were facing down three Knight of Sursi, a Castle Raptors and then Sacred Mesa. I made a mistake in not trying to relieve some of the pressure with a Riddle of Lightning at end of turn. Fizz then drew Volcanic Awakening. We were able to storm this up to cut down the Pegasus factory on the other side of the board, but unfortunately this tapped out Fizz and we died exactly to their Fortify on the next turn.

Oh well, I think this must have been one of my fastest exits ever. Looks like that median finish value is in for another pounding.

I suppose I could drop, but no, we're going to fight on. I will restore my median finish to the respectability of around 200.

Apologies to our opponents as they beat us up so quickly I forgot to take down their names.

I think our decks were pretty good this time, or at least decent, but unfortunately we caught a bad case of the Slivers. It was one of those Time Spiral Limited games where you think you might be able to stabilise if they'd just stop kicking you in the head first.

They led off with Spinneret and Two-Headed Slivers and then made it a lot more dangerous with Sinew and Virulent. I got a little green and poisoned and actually had to kill the damn 1/1 with a removal spell before it nailed us.

We haemorrhaged a lot of life but then managed to put down most of the pesky alien critters. I thought we might actually turn the game when we stole their Durkwood Baloth with a Fool's Demise / Premature Burial combo.

Unfortunately they had a Homing Sliver in play and were able to slivercycle a Mindlash Sliver from hand and turn it into a Psionic Sliver. Watcher Sliver meant their team would survive the activations, and it was all very grim for us. We killed the Psionic Sliver with Riddle of Lightning but they were able to shoot us for six and then attack for the win on the next turn by removing a blocker.

Not my day today. If I ever get another Pro card it's going to need a larger box for the Median Finish category.

It's all for the honour. And rankings and er… to not finish rock bottom?

We sat down and immediately things looked a little strange. I looked at their decks. Seeing my puzzlement Arita immediately responded:

I did feel a little guilty as we'd sort of drafted reasonably serious forty card (or rather mysteriously forty-one card decks) with unfair cards like double Sprout Swarm. It felt a little unsporting on our parts.

So they beat us to a bloody pulp in approximately 9 minutes, obviously.

After suspending Pthisis I failed to draw a third land and Fizz drew Whitemane Lions after they'd already nutted all her monsters. Sort of summed up the day I guess.

To be honest, even though it's been my worst performance at a Pro Tour ever, it's still been fun. I don't know what to make of the Two-Headed Giant format. If you try to take it too seriously then it's too easy to get frustrated by the greater variance from a best-of-one format. For that reason I did think that maybe it shouldn't be a Pro format. But it is fun, and maybe it's not too bad to have a Pro Tour where the emphasis is on fun once in a while.

Of course it would have been much more fun if I'd actually managed to win a game...

Sigh. Did you know I went 7-0 in drafts over the last couple of days?