The Pros Speak on Feature Matches

I think everyone who plays high-level Magic has a story about their first feature match. I certainly remember mine--it was a contest between myself and Jean-Denis LaCourse at Canadian Nationals 2001. I was beating down with a massive Magnivore in game 3, trying to race the Meteor Storm that was on the table, and it came down to one final turn where he had to rip a burn spell to finish me, or die to my next attack. His card? Fiery Temper for the win.

The loss was disappointing of course, but looking back, I know that my first feature match was a very positive experience. The attention, the fact that I was going to be able to see my face on the Internet and read a report of the goings-on in my match, that was very exciting to me. Back in those days, my view of the inner workings of Magic media was very naive--the Sideboard was a mystical, magical entity that could hand out fame on feature match wings. Two years later, though, I've pulled back the curtain and seen the men responsible for handing out the press attention (Mark Rosewater and Josh Bennett, with input from others), the process seems less magical but no less significant.

It's good times. I've had two feature matches, both tons of fun, and even if I hit feature match number ten or twenty or fifty sometime way down the line, I doubt it will lose much appeal. It's always a great experience to get out there under the lights and show what you can do, with the Magic world watching.

Of course, there are Magic players out there who have already hit feature match five, ten, twenty, or fifty in their careers. They're cool customers now, but have you ever wondered what these Pros were feeling the first time they heard their name called? Do they still get nervous, even now?

Time to go get some answers!

SB: Do you remember your first feature match?
KK: My first Pro Tour feature match was at Worlds in Sydney, and the story is kinda interesting, though I doubt Mike would be too happy with me telling it.

SB: Oh go ahead, I'm sure he won't mind.
KK: Ok. Mike Pustilnik and I had both 6-0'd the draft day, so they featured us. He was playing a madness deck with Elephant Guides, and I was playing the German threshold deck. He won the first game pretty handily, and in Game 2 he had Wonder and could have attacked to kill me if he'd sent everything, but he left a Sylvan Safekeeper back and was one point short. I managed to Careful Study into Wonder the next turn, then played two Roars, then I started casting thresholded Grizzly Fates. So I ended up winning the match 2-1 in the fourth extra turn despite starting off down a game and my opponent having unblockable lethal damage on the board in game 2. Then I went on to Top 8 because I'm very lucky.

SB: Do you remember your first feature match?
ZM: My first feature match was at Pro Tour - Los Angeles 2. I was a junior and [my opponent and I] were both 5-0. Neither one of us was a name--no one knew who I was at the time--and so we were just sort of asking each other "Do you know why we're featured? Is it because of you?" It wasn't a big deal--just a match with people watching, and I'd played with people watching before. They didn't even have mats back then, so--just a match. 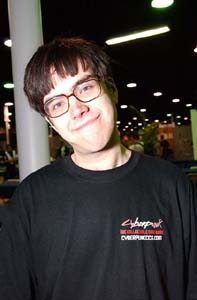 SB: So for you, it wasn't really anything exciting.
ZM: Heh--in my first Masters feature match, I spent five minutes talking my opponent into an intentional draw!

SB: Obviously you've had a lot of feature matches since then; do they evoke any feelings in you now?
ZM: They evoke a groan. When they call your name, it means you have to get your lazy butt up and walk over to the feature match area, you have to redo all your shuffling, you have to play on the mats, and you generally run out of time more often.

MZ: My first feature match at a Pro Tour was at Worlds this year. I was 5-0 in Standard, and I had to go up against the worst possible matchup ever. They should have known it would be terrible, but Rosewater wanted to feature the 5-0's. I was playing Rift-Slide and [Daniel Zink] was playing Mirari's Wake, so my deck couldn't really win. He totally smashed me two games straight, and even said to his friends that he could have beaten me many turns earlier, but he wanted to draw it out so he could enjoy his first feature match.

SB: How do you feel about feature matches in general?
MZ: I love to have feature matches personally. I like to get out there, put on a show, talk a little bit of trash--not even really talk trash, you know, but just have some fun. I think as a whole that feature matches are great. They give people following along at home something to do, and also some of the lesser players at the event a chance to watch the really good players. I know I love reading them on the Internet, I do that all the time. What have the other people been saying? 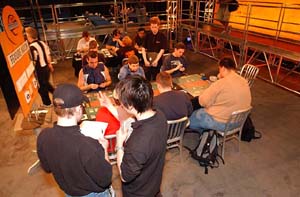 (Author's Note: I knew the answer to this question almost soon as I'd finished asking it. Mark will never be tired of playing in front of a crowd, even if he does it 1,000 times. If you've ever met him, you know what I mean.)

EH: My first feature match was actually Top 8 of U.S. Nationals in 2001. I played against Dave Bachmann, and it was a bad matchup--he was playing Burning Bridge and I was playing Fires. I had no main deck way to deal with Bridge. He kept a one land hand going first in game 1 and I smashed him, and then I boarded in Hull Breach.

SB: How many feature matches have you had since then?
Eugene (chuckles): A lot. An average of 1.5 per event.

SB: Now that you've had so many, how do you feel about feature matches now? Do you like hearing your name called?
EH: It's fun. Like, sometimes it's a little nerve wracking when it's against someone really good.

SB: Do you remember your first feature match?
JR: Yes, I do. It was last round at Pro Tour - Nice, where the actual feature match that was supposed to happen drew or something, so they moved us in. I was playing against Zev Gurwitz, who was known for Zevatog at the time, so that's probably why we were featured.

SB: Do you have the same feeling about feature matches that you did when you got your first one, or have they lost their excitement?
JR: Not really, I still love feature matches! I love being under the lights, playing at the Pro Tour. It's one of my favorite things. I enjoy playing in feature matches far more than regular matches.

SB: You've had a lot of feature matches in your career--do you still get nervous?
JR: I enjoy playing in feature matches, so I don't get nerves. I know that I'm going to make mistakes from time to time, but that doesn't bother me. Whatever happens, happens!

SB: How would you change things, if you could?
JR: I think Mark chooses the feature matches based on the players that he knows, and in America that's fine, but in other places it will not line up with what the audience wants to see. In Germany, the German audience will want to see German players, and they basically just get Kai, and that's it. That should change.

So there you have it, Magic fans--feature matches mean different things to different Pros. Good luck getting one of your own. I can't speak for everyone, but I know that for a small-timer like me, it's something you never forget!