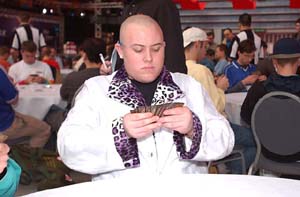 He is young, he is rude, he has shaved his head, he has never worn the same thing to a Pro Tour and he is constantly looking to overdo himself. For 2002 Pro Tour Nice, Peter Szigeti dressed up in a white furry "pimp suit", but only because he couldn't get the even more outlandish outfit that he ordered in time for the event. "I am pretty sure I'm public enemy number one. I think that's even what I want," the controversial player says.

Most people who have checked out the various Magic websites on the internet may have encountered articles written by or about Peter. His internet nick is "ptr", and the latest internet controversy he was in, was an argument with Sol Malka that resulted in Ed Fear challenging them to meet in a three-format tournament. Fear even said he'd put up 400 dollars of his own. The conditions were simple; the loser would basically have to pay up 100 dollars. Malka declined. Szigeti wanted to go for it. "If someone is going to give away free money, I don't care who the opponent is. But it's not really about the money, it's about beating Sol," he claims.

Szigeti easily admits to having insulted Malka. "I don't like him. He calls himself the people's champion. Even if he didn't come up with it, he is obviously pushing it by using it in every report. If he is, then why didn't he get voted into the invitational? And the people's champion would accept the challenge," he says, not hesitant at all to add fuel to the fire. In fact, Szigeti is well-known for insulting people, he even thinks that most of the people he insults deserve it. "Most times I don't have a bad conscience, sometimes, yes. I'm not just gonna pick some guy and start stuff with him. It is immature, for sure, but most people can see through a lot of the sarcasm. My audience is the younger generation of players, and I think we have a different generation of humour."

There is definitely a new generation of Magic players making an impact on the tournament scene nowadays, and Peter is part of it. Some people claim that the youngsters are loud and disrespectful towards the old-timers. Szigeti agrees that he lacks respect for many other players. "Respect is something earned. From what I've seen so far, the older crowd hasn't shown me any reason to respect them."

Peter is different, and he knows it, actually he uses it for all that it is worth. "I'm gonna call out people I don't like, I speak my mind, I guess. Everyone doesn't like certain people, but most people will keep it to themselves. I don't see the reason to do that," he grins. While he certainly calls out the people he dislikes, the 20-year-old claims that he does it for laughs, not to be mean. "A lot of it is for entertainment, to get laughs and to get popular. It is working so far. Lately, there has been more coverage of me than anyone else."

Peter started playing Magic only three years ago. Like many other players, he had friends who played the game, but unlike many players, he thought the game looked stupid. "I played it anyway, and got hooked to it. Since then, I've always set new goals. When I started, I said that once I qualified, I wouldn't play anymore, because it's time-consuming, you know? Then I qualified, and I thought I could just go. Well, then I wasn't going to stop until I made a top 8. Then I won Turin, and the goal changed to making the top 8 of a Pro Tour. Whenever that happens, I'm sure there will be a new goal. I don't see myself quitting anytime soon," he says.

The main goal, however, is to make it to the Magic Invitational. That's one of the reasons why the Los Angeles resident keeps drawing attention to himself – ("I think that if I do this, I may get in this year, because I'm not making it on Pro Tour points anytime soon".) The other reason is simply that he loves attention. "I got a lot of attention when I was playing sports; baseball, football and wrestling. I was on a full scholarship, but Magic got in the way of school, in the way of sports, and all funding got lost. So I decided to take up this more seriously. I like it when I walk into a room, and a bunch of people will say something and point at me. You don't get that by being the nice guy."

Peter is serious when he plays, though. He admits that earlier, before he got his bad boy reputation, he was intimidated every now when he sat down to play. Now the tables are turned, and Peter has plenty of self-confidence. "There is nothing for me to be scared of, so I'm just gonna play my game. I am a good player, not the best technical player, but I have an advantage that others don't have. You can look at my results, and I have only been playing for a short amount of time. Kai [Budde] has had nine years, and he has won five Pro Tours. Come back to me in eight years, and I will have more top results. It will come," he says, confident that his play along with his reputation will be the key to success. "I think you need to be self-confident, or else you just won't win," he smiles. At 2-1-1, he had total faith in being able to make it to the top. "I think I can make day two and win the whole thing. Or, I can make the top 16 if I make day two. I'll give myself one loss."

So, the clothes, the act, the whole image thing, is it just an act or is it the real deal? "I am really like this, and it is a show," Peter says. "It's easy for me to be outlandish and out of control. But I'm not a bad person or a bad guy, I think. People want to see how far I will go. I think people read the Sideboard coverage not just to see how the cards interact, but how the people interact. They like to see a show, that's more entertaining. And that's the hard part of being me. You have to constantly top yourself. There will be a point where I can't top myself," he reflects. But until then, he will just keep on doing his act, pushing himself a little further every time: "There is just one line I won't cross. I won't get banned from the DCI."