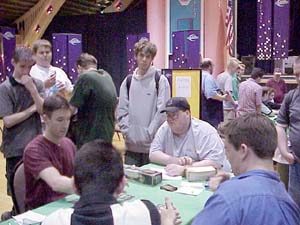 Sol Malka vs. Brian Kibler This Grand Prix: Tampa Top 8 match features two players that need little introduction. Both are quite popular Internet writers and respected among their Pro Tour peers. Malka finished top 24 at Pro Tour New Orleans and went 6-0 in the limited portion of U.S. Nationals. Kibler finished in the top 16 at Pro Tour New Orleans in addition to his top 4 at Pro Tour Chicago with his "Red Zone Creation" that put him on the map. Sources state that Kibler also won a Grand Prix up in Toronto back in the Stone Age.

Brian Kibler's deck in what many would consider an unusual archetype. His blue/red deck does not follow the conventional rules of drafting an allied color combination, but Kibler says it's a deck type he really likes. Unfortunately, he did not get the cards that make this deck strong, namely Ember Beast, leaving Kibler feeling this was the worst deck he had drafted all weekend. His color combination would suggest he would be the aggressive deck, but he will have to play the control game against Malka's deck.

Sol Malka went a different route, allying his red with the strong black cards featured in Torment. His deck features several powerful creatures, including a Possessed Barbarian and a Faceless Butcher, as well as some aggression in the form of triple Barbarian Outcasts.

Malka wins the roll and chooses to draw first -- a seemingly unusual choice for a deck featuring five 2 casting-cost creatures. Despite this, Malka makes the first move, casting a turn two Crypt Creeper before adding a Cabal Torturer to his side of the board. Kibler's first move is sending back the Creeper to save some early damage with a Churning Eddy. Malka does nothing more than remake the 2/1 beast as Kibler adds a real threat to the table in his Aven Windreader. Not to be outdone, a Possessed Barbarian comes out to play, threatening to take out Kibler's red creatures in the late game, if not for a Thermal Blast from the hand of Brian Kibler.

Malka chooses not to go the aggressive path with Kibler's lands tapped for the Blast and his Windreader used up from his attack as he adds a Dwarven Strike Force after his attack, not hasting the creature. Malka would later add that not attacking with the Force that turn was likely a mistake. Going fully agro, Kibler swings with his Windreader before playing Pardic Firecat, "go." 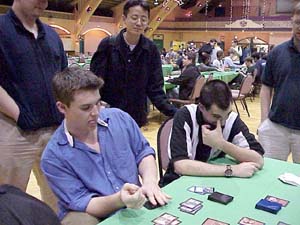 Brian Kibler Sol looked to end it quick as he Tortures the Firecat after it blocked the Creeper and Faceless Butchering Kibler's final creature, the Aven Windreader. At only 8 life, Kibler needed something and needed it fast.

Leaving a Mountain open, Kibler casts a Deep Analysis, looking for a sixth land to cast his three point Flame Burst on the Dwarven Strike Force, effectively stabilizing the board on the next turn with a Chainflinger and Rites of Refusal back-up. It was not to be, as the Analysis revealed no such land and Malka finished the game with a 7-point attack and a Morbid Hunger to the nugget.

Game 2 starts with a bit of a delay as Kibler looks around the room before finally finding his sideboard. Knowing he is going to be the control player in this match-up, the only change he makes is swapping out a Mad Dog for a Pyromania. Following Malka's suit, Kibler also chooses to draw first and mulligans his first hand.

Malka again comes out of the gates first, playing nothing on turn 2 before laying a turn 3 Barbarian Outcast. Kibler again says go, and Malka does little more than a turn 4 Unhinge, 1 of 2 in his deck, for Stupefying Touch. Now down two cards, Kibler looks to get back into the game with an Aven Fisher which trades for the Outcast before Malka plays both a Crypt Creeper and a Barbarian Lunatic.

The platinum hits keep rolling out of the hand of Brian Kibler as a Frenetic Ogre sees some rare action. Not willing to trade the gigantic beast for a lowly Lunatic, Kibler continues to take 2 as Malka Gravediggers back his Outcast and gives him a 4-1 creature advantage. 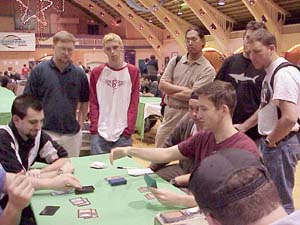 Sol MalkaAven Windreader, perhaps the only creature in Kibler's deck capable of killing Sol Malka, evens the game up a bit, but the Lunatic keeps on swinging. A Pardic Firecat ends that, and outside of some Unhinge/Anarchist action, Malka continues to draw nothing but lands. After 9 lands, 6 spells, Sol rips a Liquid Fire, which Kibler Rites of Refusals, discarding some excess land of his own. The only other spell Sol would draw seemed like a good answer to the Windreader, but Kibler again had the answer in the form of a Thermal Blast. One Sonic Seizure later, we were tied at a game a piece.

With the intensity and drama filled in the first two games, Game 3 was a real let down. After Malka made him play first, Kibler kept a Mountain, Island hand as his only two lands. His turn three "draw, go" earned a puzzled look from the face of Malka before he let out a little grin. Malka's draw was far from bad, as he laid out a Barbarian Outcast, Crypt Creeper, and Possessed Barbarian in consecutive turns while Kibler avoided discarding in his end step by discarding to a Sonic Seizure, killing the Creeper.

A Mesmeric Fiend from Malka earned three-for-one card advantage as Kibler was forced to Rites of Refusal. A Firebolt to Kibler's first creature of the game, a turn six Hydromorph Guardian, and a Faceless Butcher to remove the Aven Fisher on the next turn was all she wrote as Sol Malka advances on to the top 4 of Grand Prix Tampa.