Returning national champion Justin West is right where he wants to be, back in the top 8, with a good shot at defending his title. West has really been paying attention to both of the formats and the hours of practice he has put in are really paying off. Anatoli Lightfoot is no slouch either, posting consistent records in tournament after tournament including a GP top 8. Despite starting the day with a match loss thanks to an incorrect deck listing Lightfoot managed to shake it off and soldier on, powering his way to the finals. 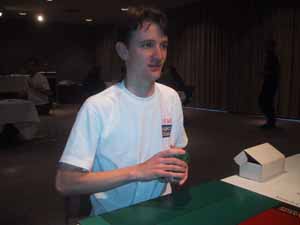 Lightfoot begins the game using his City of Brass to cast Cabal Therapy naming Chainer’s Edict, drawing a blank but still getting a nice peek at West’s hand. West replies with a first turn Duress seeing all of the cards in Lightfoot’s hand. Then the creatures begin to hit the board with Benevolent Bodyguard and the freshly drawn Weathered Wayfarer. Bloodstained Mire hits play and is instantly sacrificed for a Mountain, which he then uses to Firebolt the Bodyguard, Lightfoot sacrifices it in response giving protection from black to the Wayfarer. Unfortunately for Lightfoot the protection is no help as it gets picked off by Innocent Blood. Lightfoot plays down his Master Apocathry but West once again has the answer, casting out a Chainers Edict, forcing Lightfoot to send it to the graveyard.

At the end of Lightfoot’s next turn West cycles a Lay Waste, untaps, and summons his Magnavore, dealing 6 points of damage to Lightfoot. Lightfoot responds by casting out a Beloved Chaplain and then sacrifices it to flash back the Cabal Therapy, naming Slice and Dice. The Magnavore cracks in for 5 points of damage, with the Therapy removed from the game, and West passes the turn with Lightfoot summoning a Rotlung Reanimator. West comes crunching in with his Magnivore and the Rotlung blocks creating a 2/2 zombie token, he then flashes back his Firebolt to kill off the zombie token. After drawing his next card Lightfoot has nothing to save him and scoops up his cards. 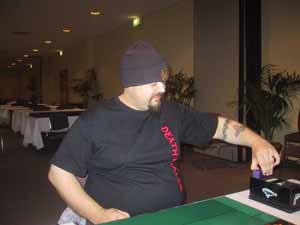 Lightfoot opens up game 2 with a mulligan, but keeps his second hand leading off with a first turn Cabal Therapy naming Chainer’s Edict. West’s reply is the same as it was in game 1 dropping down a Swamp and slapping a Duress on Lightfoot. Cycling away a Steppe in his main phase yields nothing for Lightfoot to cast and he passes the turn back to West. West elects to do nothing to do on his second turn and passes straight back to Lightfoot who is happy to play out his Master Apothecary. A cycled Lay Waste at the end of the turn yields West no turn three play and once again its Lightfoot’s turn.

Lightfoot plays out a Bodyguard and sacrifices it to flash back Cabal Therapy, and in response West cycles Slice and Dice, with Lightfoot naming Pyroclasm. He sees the cards Pyroclasm, Guiltfeeder, Befoul, Swamp and Sulfurous Springs with the Pyroclasm heading straight to the graveyard. A freshly summoned Benevolent Bodyguard adds more clerics to the mix as Lightfoot ends his turn.

West casts a Magnavore and sends it into the zone dealing 4 damage to Lightfoot who counter attacks with his team and casts Morningtide, removing all West’s sorceries from the game, but the Magnavore stays alive thanks to the sorcery. West then attacks with his little 1/1 Magnavore and plays out a Guiltfeeder. Lightfoot decides to stay back and passes the turn, with West casting Chainer’s Edict. In response Lightfoot taps his Bodyguard to prevent the next 2 damage to the Master Apothecary and then can do nothing as his Apothecary is sent to the graveyard with Befoul. Two draws of land later and Lightfoot is forced to concede the game and the match