This is Chris Allen’s third major quarter-final appearance following Top 8s at Grand Prix Sydney 2000 and Melbourne 2002. He is eager to break his Top 8 losing streak and register his first semi-final appearance. This is somewhat of a breakthrough performance for Chris Nadebaum, who has previously had success at the PTQ level in his home town of Melbourne. 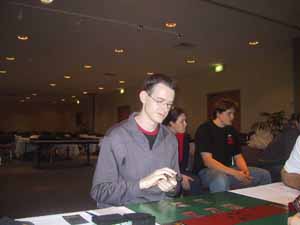 Allen won the toss and chose to play. He started with a first turn Llanowar Elves. Nadebaum Duressed a Call of the Herd. Allen played out a Grim Lavamancer and Basking Rootwalla and attacked with the Elf, not playing a third land. Nadebaum could only play a land, and took 5 from the next attack. Nadebaum’s hand was light on removal, and he played an Undead Gladiator hoping to trade. Allen attacked with all three creatures and pumped the Rootwalla as the Lavamancer traded with the Gladiator, taking Nadebaum to 10. He passed the turn without playing his third land, holding Wild Mongrel and Phantom Centaur. Nadebaum simply played a land and passed the turn. Allen finally drew his third land and attacked with the Rootwalla and pumped it, drawing out a Smother. A Wild Mongrel hit the table and Nadebaum cycled a Gladiator. He returned a Gladiator, cycled it and Duressed a Volcanic Hammer. Allen attacked for 2 and cast the Centaur. Nadebaum didn’t have the Mutilate he needed, but did Corrupt the Mongrel for 6, buying some time to draw an answer to the Centaur. Allen attacked for 6, played a fourth land and flashed back the Call. Nadebaum considered returning a Gladiator, but chose otherwise, playing Cabal Coffers and Visara, the Dreadful. Allen attacked with the pro-black Centaur, the Call token and the Elf, Nadebaum blocked the token, going to 2 and Allen showed the Firebolt.

Allen admitted that his aggressive draw that game wouldn’t have been so great had Nadebaum managed to draw a Mutilate. 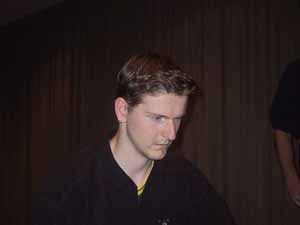 Nadebaum kept a hand with 5 land, Mutilate and Undead Gladiator. Allen kept a strong hand again, with 2 Mongrels and a Compost. Nadebaum didn’t draw the Duress to prevent the Compost from hitting the table turn 2, Nadebaum could only respond by saying “how annoying” and cycling a Gladiator. Allen’s turn 3 Mongrel drew out a Smother, drawing the first Compost card. A rueful glance at the enchantment brought out a somewhat dejected sigh as Nadebaum’s Diabolic Tutor gave Allen his second Compost card. He searched for Visara, a close call over Corrupt. He later said that he expected the first Visara that he was holding to be killed, and hoped to ride this second one to victory. Allen played out his second Mongrel and an Elf, and after considering his hand of Volcanic Hammer, 2 Violent Eruption, 2 Firebolt, he sent a Firebolt to the head. Nadebaum played Cabal Coffers, and Visara. A Hammer and a Firebolt took down the Legend, drawing a card, and the Mongrel and Elf took Nadebaum to 15. Allen cast another Elf. Nadebaum played his second Visara.

Allen attacked with the Mongrel and the two Elves, and Nadebaum let them through, fearing a Violent Eruption. Allen did in fact have the Violent Eruption, and he madnessed it, sending it to the head and Nadebaum was on six, precariously low considering Allen’s burn heavy hand. Nadebaum Mutilated for 4, keeping his Visara alive. He Duressed out Allen’s second Eruption, and Allen drew his fifth Compost card. A Phantom Centaur hit the table, placing Nadebaum a 1-turn clock coupled the Firebolt in the graveyard. Nadebaum didn’t draw an answer to the pro-black machine and the game was over.