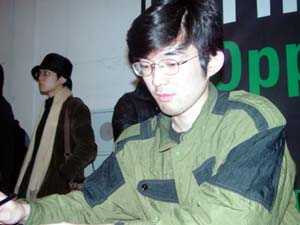 is one of three amateurs in the Top 8, and this round he's against the only "gaijin" (foreigner), Antoine Ruel. If you're Sogabe, you don't really want to play against a Pro Tour veteran in your first major Top 8. Ruel has been globetrotting this season, hitting practically every Grand Prix, so he knows this format quite well by now. He barely missed Top 8 at Madrid and Hong Kong, and is looking to make the most of it now that he's finally reached it on the third try.

Sogabe mulliganed his opening hand, and started with Bonesplitter and an Iron Myr. Ruel summoned Grimclaw Bats on turn two, and Sogabe played Viridian Joiner, then gave it the Bonesplitter. The Bats attacked for two, and Ruel played Tel-Jilad Chosen. Sogabe untapped, and played a cheap Tangle Golem along with Goblin Replica on the same turn. This left him with no cards in hand, and Ruel attacked for two once more with the Bats, then played Nim Replica.

The Goblin Replica was sacrificed to destroy the Nim Replica, allowing Sogabe's team to smash unimpeded. Ruel swung back with just the Bats, leaving the Chosen back to stop the Tangle Golem. He then played Moriok Scavenger, getting Nim Replica back. Sogabe couldn't mount a successful offense, so he simply played a Tel-Jilad Outrider. Ruel kept attacking through the air with the Bats, and brought the Nim Replica back out.

Sensing that the game was slipping away, Sogabe charged with his whole team. The end result was unfavorable thanks to Battlegrowth, as Sogabe lost a Joiner and an Outrider, while Ruel just lost his Replica. Sogabe wasn't completely out of gas, and played Fangren Hunter.

Ruel attacked with his 3/4 Scavenger, and Sogabe let it get through for damage. He then put Bonesplitter on the Hunter and attacked, and Ruel blocked with the Bats, pumping it and using Echoing Courage to help it win in combat. Sogabe played an Arcbound Stinger and gave it the Bonesplitter, but Ruel had the perfect answer. With a shrug, he cast Murderous Spoils to kill the Stinger and take the Bonesplitter, which went right on the Bats. A turn later, Sogabe conceded.

Sogabe had an incredibly fast start, playing Arcbound Stinger and equipping it with two Bonesplitters. It got through for five damage, and died to Creeping Mold. Sogabe played Iron Myr and gave it one of the axes, but Ruel stopped that plan cold with Tel-Jilad Outrider. Sogabe played a second Myr and gave it the other Bonesplitter, but couldn't do much otherwise. Ruel's Outrider attacked for three, and Sogabe played a very threatening Goblin Dirigible. The Outrider dealt three more damage, and Ruel said go, sitting back on six lands and telegraphing Murderous Spoils. Sogabe decided to play it safe, not putting any Bonesplitters on the Dirigible. 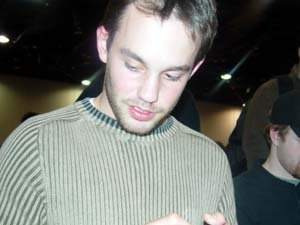 Indeed, Ruel had the Spoils, and used it to kill the 4/4 flier. Sogabe played an Auriok Siege Sled, and took three more damage from the Outrider. Ruel played a Frogmite, and braced to take some damage. Both Bonesplitters went on the Sled, which activated twice to ensure that Ruel couldn't block. On end step, Battlegrowth made the Outrider bigger, and Ruel attacked with it on his turn, along with Copper Myr to deal five damage. Moriok Scavenger came out, bringing back nothing but providing a badly needed non-artifact body to block the Sled. It seemed that Ruel was well on his way to winning the match, but then Sogabe dropped Platinum Angel on the board. It took one Bonesplitter in each hand, and then donned Whispersilk Cloak: Ruel smiled as he scooped.

Ruel played a Chosen followed by Chittering Rats, and Sogabe had Bonesplitter and Tel-Jilad Wolf. Ruel's team attacked for four, and he played a Wolf of his own. Sogabe attacked with his Wolf, and Ruel blocked with his to trade. Sogabe played an Outrider, and it blocked and traded with the Chosen. Ruel tapped five and summoned the monstrous Molder Slug, which didn't make Sogabe too happy as he looked at his hand.

Bonesplitter headed for the graveyard, and he played Fangren Hunter. The Slug attacked, and died in a 2-for-1 trade with the Hunter and Barbed Lightning. Sogabe had no threats or answers left, though, and Ruel kept the pressure coming, bringing out Wurmskin Forger. A turn later, Sogabe conceded.