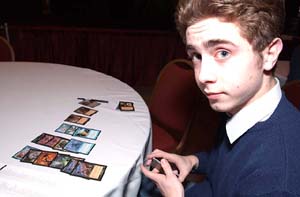 The last draft of the swiss rounds saw Jeff Cunningham sitting next to Don Gallitz in pod 1. Cunningham came in with the intention of drafting black/blue, and Gallitz wanted white/blue. They ended up fighting over their common color, but both did well enough to find their way to today. Ironically, Cunningham and Gallitz sat next to each other during the Top 8 of this draft, and once again, both players fought over blue. During the swiss rounds, Cunningham easily had the better deck of the two, but this time Gallitz cut off quite a bit of blue from Cunningham.

On the other hand, Wolf is running a very solid red/green deck, with all the usual suspects:

Wolf summoned a second turn Mongrel, while Cunningham had Crypt Creeper. The Mongrel came through for two damage, and Barbarian Lunatic followed. Crypt Creeper swung back for two, and Cunningham brought out Dusk Imp. Wolf's team then attacked for four, and Chainflinger came out. Cunningham would need to kill off the pinger, or his two creatures would soon die. He cast Concentrate, and said go. Firebolt took down Crypt Creeper, and Chainflinger pinged away the Dusk Imp. This left Cunningham with no creatures on the board, and the Lunatic and Mongrel attacked for another four points of damage.

Cunningham then played another Creeper and Millikin. Firebolt was flashed back on the Creeper, and Wolf's Chainflinger, Mongrel, and Lunatic all attacked. The Millikin chump blocked, and Cunningham went to six life. Morbid Hunger killed off the Chainflinger, but Wolf had another Firebolt to finish up the job after an attack.

Yet again, Wolf had a second turn Mongrel, but this time Cunningham had Rites of Refusal. He discarded island, and the super-bear was countered. He followed up with Dusk Imp. The Imp died to Firebolt, and Cunningham summoned Cephalid Scout. Wolf then brought out Krosan Archer, while Cunningham had Fledgling Imp. Halberdier hit the ground running thanks to Reckless Charge, and both of Wolf's creatures attacked. Cunningham blocked the Archer with the Imp and Scout since Wolf was left tapped out. The result was Cunningham taking six damage, while the Archer and Imp traded. Dematerialize bounced back the Halberdier, giving Cunningham a little more room to breathe.

The Halberdier came back out, and Blazing Salvo targeted the Scout. Cunningham chose to take five damage, going down to nine life points. Patriarch's Desire then killed off the Halberdier. Wolf came right back with Krosan Archer, and Cunningham brought out Bloodcurdler. Firebolt was flashed back to burn away the Scout, and the Archer came through for damage. Cunningham brought out Aven Fisher, and Wolf flashed back Reckless Charge on the Archer, and attacked. The Fisher took one for the team, saving Cunningham from taking five damage. 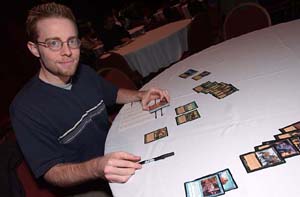 Firebolt took out Cunningham's Crypt Creeper, and Wolf played Seton's Desire on the Archer to deal more damage. Morbid Hunger went to Wolf's dome, but the damage had been done. Cunningham tried to dig into an answer with Concentrate, and summoned Crypt Creeper. Wolf brought out Dwarven Strike Force, and that was enough to put him up 2-0.

Cunningham brought out Crypt Creeper, while Wolf commented, "I'll tell you one thing...I'm one lucky man today" and brought out Wild Mongrel. Millikin showed up on Cunningham's side, and Wolf summoned Krosan Avenger. Patriarch's Desire took down the Mongrel, and Wolf attacked with the Avenger. It traded with the Creeper, and Wolf cast Chainflinger. It shot down the Millikin on the following turn, while Cunningham brought out Fledgling Imp. Frenetic Ogre was countered with Rites of Refusal, and Cunningham attacked with Fledgling Imp for two point of damage. He then brought out Rotting Giant to help stabilize the board.

Now was Cunningham's chance to become the aggressor, and he attacked for five with both his creatures. Wolf saw that Cunningham's defenses were down, double Reckless Charged his Chainflinger, and attacked for eight damage. Rotting Giant attacked for three, Bloodcurdler came out, and Psionic Gift enchanted Fledgling Imp. Wolf then played Overrun and Reckless Charged his Chainflinger, which was his only creature. Cunningham blocked with Bloodcurdler and the Imp, and went down to two. Scorching Missile finished the job.