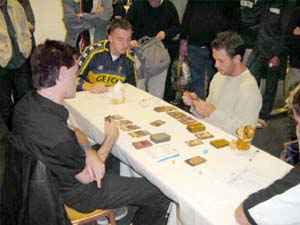 As the quarterfinals were about to start, Antoine realized his deck had just been stolen. Eventually, he managed to borrow all the cards and the match could begin.

Antoine Ruel seemed to be the favorite for this match, not only because of his recent results (fifth GP Top 8 in a row, third place at worlds), but because his red-black deck was supposed to beat Matt's red-green deck, a deck he played, "because I was so drunk that it was the only one I could build."

After he won the toss, Matt took a mulligan and kept a two lands hand, but he never drew a third. With Antoine having pretty good draws, it did not give him many possibilities to win game one.

Both of them played a familiar on their second turn. Not dropping a third land on turn three, Matt tried to dismiss Antoine by killing his creature, but the Frenchman laid a Phyrexian Rager. He trade it on his next turn for the Mongoose Matt had just played and added a Flametongue Kavu as a new threat both for the Dutchman's mana and for his life. The Kavu killed another Mongoose on the following turn, while the new Blazing Specter made the Dutchman discard one more Mongoose. On the following turns, Matt's second Familiar and fourth Mongoose did not help him much against Antoine's army (2 Specters, Flametongue Kavu, Shivan and Pyre Zombie) and he was forced to concede.

Game 2 looked much the same, with Antoine as the one who can't draw his third land. 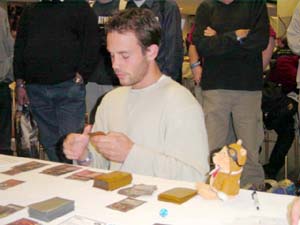 Matt took a good start with Thornscape familiar followed by Raging Kavu, which was blocked by Shivan Zombie. Antoine did not play a third land, but another Shivan Zombie, which was killed on the following turn by Thornscape Battlemage. On his next turn, the Dutchman played a Mongoose after Antoine decided to Terminate the 2/2. Facing the two 2/1, he asked for a Void but only got a Swamp that permitted him to play a Phyrexian Rager, putting him down to 13. It blocked the Mongoose but the Familiar put Antoine down to 11, then to 9. An Urza's Rage, a Scorching Lava and a Ghitu Fire later, players could start game three.

"It would be cool to both draw lands this time" Antoine said, smiling. He was right, this match had been pretty uninteresting so far, and the audience was moving to the three other quarterfinals. Fortunately we eventually saw a true Magic game.

Both players had the good amount of lands and the game started with turns two Shivan zombie and Thornscape Familiar. Antoine burnt the green creature and gave the first damage. Matt answered with a Raging Kavu but Antoine's Flametongue could deal with it. The Dutchman tried to stabilize by casting a Flametongue Kavu targeting his little brother. Antoine attacked again and added a Pyre Zombie and a Shivan Zombie. Matt cast a Mongoose to try to stop the Zombie army's beatdown. After one of the 2/2 creatures traded with the Kavu, Matt played a Skizzik that was blocked and killed by the Pyre Zombie after damage was on the stack. After his next draw step, Antoine now had four cards in hand: Pyre Zombie (the same one), Terminate and two Slays. He could not see how he could possibly lose and he looked pretty confident. 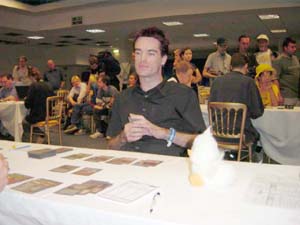 Almost nothing happened on the following turns with Antoine Slaying a Kavu Titan and his Crypt Angel being killed by an Urza's Rage. Since Antoine had nothing but removal spells (Pyre zombie had been removed by a scorching lava) and Matt had Ghitu Fire in hand (he was at 7, Antoine at 8), players were just expecting for the draws they needed, that is to say two lands or another blast for Matt and Ghitu Fire or creatures for Antoine. On his turn the Frenchman drew a Phyrexian Rager that he kept in hand so he wouldn't die on a land topdeck. Antoine then drew Pyre Zombie, played it and Flametongue Kavu which target the 2/1. He sacrificed it in response and put Matt down to 5. But the Dutchman had drew a Scorching lava and played it at the end of turn. "Am I dead ?" Antoine asked, and as Matt showed him the Fire, he conceded.