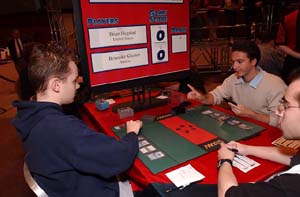 Play resumed at the end of the day for the round of 8 in the Masters tournament. Brian sat down with his W/U/G control deck featuring Mystic Enforcer as his kill card. Benedikt played a Psychatog deck, similar to the ones featured in the other three matches.

Benedikt won the die roll and chose to go first. Both players laid lands turn after turn after turn, with one of them occasionally cantripping through their decks with an odd Opt or Peek. Around the 6th turn, Benedict attempted to get ahead on the land count by Recoiling lands. This continued for two turns, until Benedikt stalled on lands, and tried to force through a Probe with Kicker. It was disrupted, leaving Bendikt short for Counterspell mana, which proved fatal the next turn when a 6/6 Enforcer hit the board.

The Austrian tried to turn the game around from a single-sided pro-black slaughter to a race, by laying a Psychatog. Both players continued attacking each turn, reducing the life totals at one point to 8-7, in favor of Brian. His next attack brought Benedict to 2 life, and Klauser failed to draw a cantrip he needed to finish off Brian on his turn, forcing a concession. 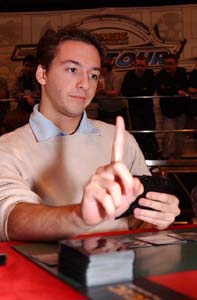 This game went more in Benedikt's favor. He countered two early attempts at Fact or Fiction from Hegstad, and proceeded to strip the American's hand with consecutive Probes. A Fact or Fiction of his own later added a Repulse, Opt, and Island to his hand.

Brian got an Enforcer onto the board, but Benedikt had it fully under control this game with bounce spells. A Duress revealed that Brian's hand contained two Enforcers, allowing Klauser to freely play his Psychatog and protect it with multiple bounce and counterspells. One turn later, Brian conceded the game before taking 20 damage in one attack from the potentially enormously huge atog.

Hegstad chose to draw first, and had the first play of the game with a Peek. This revealed a mediocre hand from Benedikt, consisting of three lands, an Innocent Blood, and 2 Opts. Klauser Opted into an Undermine, which he kept. Hegstad seized the opportunity to lay down a Meddling Mage naming the Blood seen before. 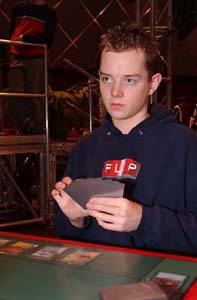 Try as he may, Benedict could not dig for an answer to Chris Pikula. Turn after turn he drew countermagic and cantrips, but could not seem to find the card advantage cards that had won him Game 2. The Mage kept on swinging turn after turn, making a negative reduction to be applied to the life total of Mr. Klauser.

Hegstad cast an Opt at the end of Klauser's turn, which met with a Gainsay. This tapped out Brian, allowing Klauser to activate his Coliseum bringing two Repulses to his hand. He then cast one of the bounce spells on the Mage, adding a Force Spike to his hand. It was all for naught though, since Brian played two Meddling Mages (naming Repulse and Persuasion consecutively) and an Enforcer on the following turn.

Many minutes later, Klauser extended his hand to his opponent.