Quarterfinal
Captain of the Team of Captains

For almost any competitive Magic player, making the Top 8 of a Pro Tour is the dream. If a player works hard enough, and is fortunate enough, to play in a Pro Tour Top 8, that entire tournament becomes one unforgettable experience that can be recalled vividly for years to come.

Unless you're Jon Finkel, that is.

When Jon Finkel was filling out his Top 8 profile for Pro Tour Kuala Lumpur (which he went on to win), he literally couldn't remember how many Pro Tour Top 8s he had under his belt! He thought that Kuala Lumpur was (roughly) his tenth Top 8, when it fact it was his twelfth. 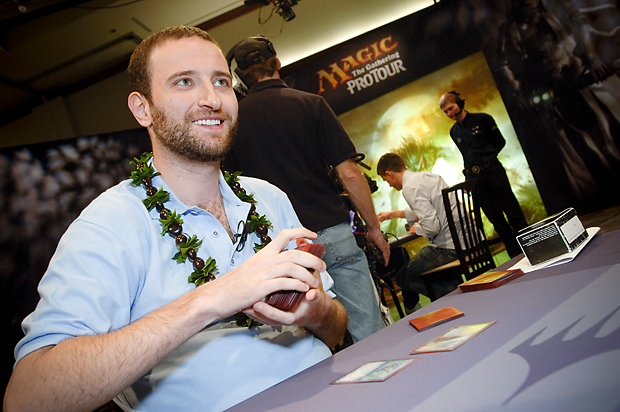 Jon Finkel has so many Pro Tour Top 8s that he loses count on how many he's got!

With another Top 8 this weekend, Finkel now has a mind boggling thirteen Pro Tour Top 8s to his name.

Sitting across from him is Matt Costa, A 19 year old college student from Massachusetts who started turning heads last year when he posted back-to-back Limited Grand Prix Top 8s in Kansas City and then Montreal.

Costa felt good about his chances in the drafts this weekend, but he wasn't sure what to expect from his Constructed deck. He tested Standard heavily, and in the end he decided to go with a tuned White-Blue Delver deck.

With a 3-3 finish in Limited, Costa needed to do very well in Standard if he was going to have a good finish at this event.

Despite the fact that his Delver deck didn't feature any groundbreaking innovations, Costa was able to make good use of his practice for the event as he posted an unblemished 9-0-1 record in Standard, exactly the record that he needed to advance to his first Pro Tour Top 8. 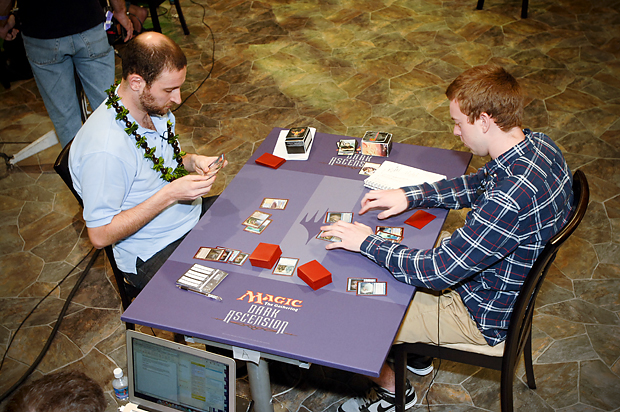 Matt Costa may not have the background Finkel does, but his Standard record for the weekend with his Delver deck is certainly impressive.

Finkel opened on two copies of Delver of Secrets that quickly traded with Costa's own Delver, and a Gut Shot.

On his second turn, Costa cast an Invisible Stalker that could become quite deadly with the aid of a Sword of War and Peace or a Runechanter's Pike. Finkel, unfazed about the possibility that his opponent might have a piece of equipment in his hand, tapped out for a Drogskol Captain.

Costa did indeed have the Sword of War and Peace, and for a second it looked like Costa would be able to run away with the first game against Finkel's equipment-less Delver deck. 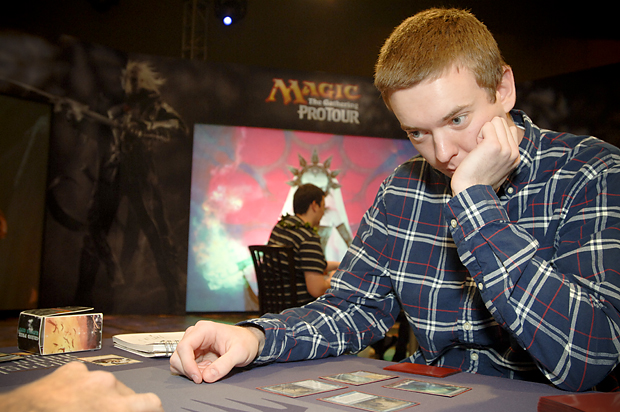 But Costa's lead wouldn't last for long as Finkel played out another Drokskol Captain and a Phantasmal Image (copying a Drogskol Captain) to give himself a very impressive air force.

Costa ripped through his deck as quickly as he possibly could with Gitaxian Probes and Ponders, but try as he might, he could find nothing that would allow him to race Finkel's army of Drogskol Captains.

Costa again had an early Invisible Stalker, but this time he didn't have the Sword of War and Peace that he needed to make it into a menacing threat.

Finkel's first attempt at Lingering Souls got Mana Leaked, and a Gitaxian Probe revealed that the Hall of Famer had only Phantasmal Image, Snapcaster Mage, and two Gut Shots in his hand. However, Costa didn't have anything that he could use to capitalize on the situation.

A flashed back Lingering Souls got countered by Dissipate, but Finkel was able to resolve a Delver of Secrets.

Dungeon Geists gave Finkel another good threat, and a Drogskol Captain showed up to make the flying spirit even more fearsome. 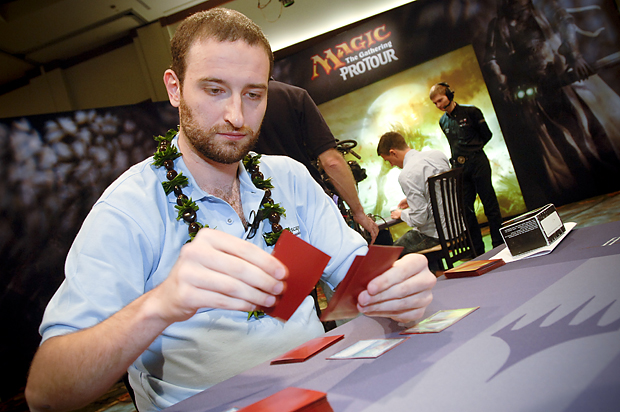 After taking a few big hits in the air, Costa finally found the Sword of War and Peace that he had been looking for since the beginning of the game. But by the time that Costa drew the Sword, it was just too late, as Finkel was able to fly to victory a turn before Costa would have won with his equipped Invisible Stalker.

Costa got off to a quick start in the third game with two copies of Delver of Secrets, while Finkel spent his first couple of turns digging through his deck with Gitaxian Probes and a Ponder. 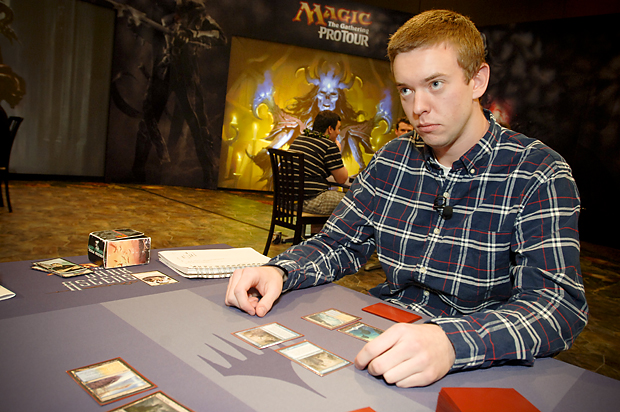 Costa comes out of the gates swinging with not one, but TWO copies of Delver of Secrets.

Costa transformed his Delvers into Insectile Aberrations on turn three, countered a Phantasmal Image, and played a Geist of Saint Traft that forced a lightning quick concession from Finkel.

Finkel took a mulligan to start the fourth game and didn't hesitate before keeping a six-land no-spell hand.

After the two players spent their early turns making their land drops and crafting their hands with Ponders, Finkel started to build up an army with Lingering Souls and Moorland Haunt, while Costa (who had kept a very reactive hand that made him unable to punish Finkel for his all-land opening hand) attempted to keep himself in the match with Geist of Saint Traft.

Costa's Geist of Saint Traft traded with a couple of tokens, and after combat the young American pro replaced it with another Geist.

A Moorland Haunt, a few good combat steps, and a Snapcaster Mage later, and it seemed like Costa was ready to force a deciding fifth game...

But when Finkel dug into another Lingering Souls and a Drogskol Captain, there was simply nothing that Costa could do but wish Jon luck in the Top 4.

Jon Finkel wins 3-1 and advances into the semifinals!