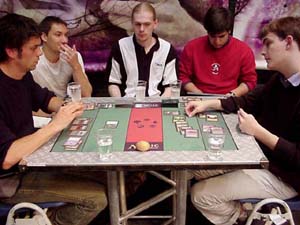 Two Frenchmen met once again, this time at the quarterfinals. The atmosphere is friendly and relatively relaxed. Christophe had a boiled egg he placed in the middle of the table. The Head Judge allowed the egg to keep Haim company, as his lucky charm.

The lucky charm worked and he was able to chose and started first. Tenenbaum had to mulligan, since he didn't want to risk going into the game with only a Mossfire Valley.

Christophe dropped a Looter during his second turn. His opponent held Fire/Ice in his hand but couldn't play it, for he had no red mana source available. A very slow start for Amiel, who has turn one and two mana-generators like Birds of Paradise and Werebear.

When he tried to kill the opposing Looter, the freshly cast Aquamoeba served it's purpose well, by enabling it's owner to discard a card to use Circular Logic and counter the spell. The second time he tried his spell suffered the same fate.
Tenenbaum then went for a Call of the Herd and a Wild Mongrel.

Christophe was browsing through his library and found a Flametongue Kavu to take care of the hound but having been tapped out he enabled his opponent to kill the looter with Prophetic Bolt, which netted a Fact or Fiction.

After some thought, Christophe ended his turn but was able to counter the Fact or Fiction and cast an Arrogant Wurm. Another Flametongue Kavu on Haim's side took care of an Elephant and he swung at his opponent bringing him down to six life.

With only two Werebears and an elephant, Tenenbaum died to a Fire/Ice that took both his bears out.

Once again Haim got a Looter out on his second turn after taking a mulligan but Amiel had a Stupefying Touch for it and cast a Werebear for himself. Christophe cast a Flametongue Kavu to take care of the bear. Still, the Kavu was not to last long and was taken out by a Fire/Ice.

Amiel had a lot of spells to take care of threats, but since there were no threats he kept taking one damage from the stupefied looter. His opponent just took creatures out of the way with Violent Eruption and cast Aquamoeba.

The crowd shouted out when van den Broek won a game just next to this game. Distracted for a while, both players commented and went back to their business.

Amiel cast a Flametongue Kavu and when his opponent used rushing river to bounce back both his creatures, he was forced to use Rushing River on the Flametongue Kavu to be able to re-use it again. The re-use was not successful, a Circular Logic stood in its way and so Christophe was free to use his Looter once again.

« Pas mauvais ça! » said Amiel as soon as he saw his third Werebear and noticed he had threshold. With the bears low casting cost he was able to cast Fact or Fiction, which revealed Roar of the Wurm, Beast Attack, Stupefying Touch, Fire/Ice and Shivan Reef. 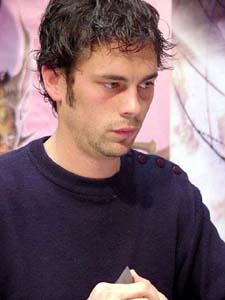 Tenenbaum took the second pile but had to see his bear fall victim to a Kavu. Shortly after, his opponent attacked, left him at one life and finished the game with Fire/Ice.

Tenenbaum took out his three remaining Werebears and replaced them with Persuasions. Amiel got a starting hand of two Fact or Fiction, two Fire/Ice and three lands. He was very confident about that.

During his next two upkeeps his only green mana source was tapped with Fire/Ice. When Haim had four lands hewas confident enough to cast a Wild Mongrel. The turn after he discarded a Deep Analysis to cast its flashback and countered Tenenbaum's first Fact or Fiction. This allowed Amiel to take out the Mongrel with a Flametongue Kavu, which also got Flametongue Kavued as has been normal in this match.

He then cast his second Fact or Fiction revealing two Beast Attack, one Fact or Ficton, one Shivan Oasis and a Birds of Paradise.

Here is how it ended up:
Pile 1: Fact or Fiction, Beast Attack
Pile 2: Beast Attack, Birds of Paradise, Shivan Oasis.

Tenenbaum decided for the second pile justifying he had already had two copies of Fact or Fiction. Although the Bird didn't live long, Amiel could finally take advantage of his larger creatures and cast Beast Attack from his graveyard. He held another Beast Attack, Roar of the Wurm and Prophetic Bolt in his hand.

When he cast his second Beast Attack Rushing River bounced both of them back. Finally he was able to cast his Prophetic Bolt but it still got hit with Circular Logic. He didn't really mind because he was free to cast Roar of the Wurm and Call of the Herd without any fear. Although his Elephant was hit by the fourth Kavu in this game, it didn't stop Amiel from attacking with his Wurm.

Haim had a hand for Circular Logic's and had another one ready for the second Wurm. So just the second Elephant hit play. Haim thought his problems had finally ended when he used Violent Eruption to clear the table but his opponent had a Call of the Herd to keep pressing. Christophe wasn't finished and countered the first Elephant with his fourth Circular Logic and used his fourth Flametongue Kavu to kill one Elephant.

Both players laughed when Tenenbaum drew his third Call of the Herd. The beatings continued and Christophe had four life and even used the flashback on a Deep Analysis to find and answer. He did so and summoned Wild Mongrel. His opponent just bounced it with Repulse and attacked for the win.

Tenenbaum still couldn't understand how his opponent drew four Flametongue Kavu and four Circular Logic. He didn't have the aggressive start his deck normally has until now but he was surely hoping for it.

Amiel had a very good opening hand even though it wasn't very aggressive.
He started out with Birds of Paradise and a Stupefying Touch on his opponent's Mongrel. Sadly, his bird was killed. When his opponent tried to get another Mongrel going it was shot from the table with Flametongue Kavu. And once again Kavu met Kavu while Haim kept hitting with his Mongrel. 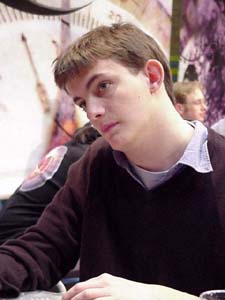 Here is how Haim divided it:
Pile 1: Beast Attack, Call of the Herd and Fact or Fiction
Pile 2: Persuasion, Flametongue Kavu

Tenenbaum, who held a Call and a Roar in his hand, picked the second pile to take the Mongrel out of business. But that particular Asian Mongrel didn't want to visit the graveyard so it came back into play after a Rushing River returned it. The Rushing River delivered a nice card advantage, having the Kavu kill itself.

Tenenbaum then picked the Mongrel with Fire/Ice to force his opponent to discard a Looter to it and made an Elephant to defend his 9 life.

Haim made an impressive finish as he first used a Violent Eruption to boost his Asian Mongrel, killing the Elephant and cast the last card of his hand, Violent Eruption number two, to deliver exactly 8 damage to finish the quarterfinals for Amiel Tenenbaum.