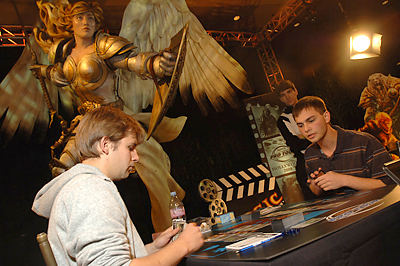 Charles Gindy and Nico Bohny battle under the gaze of the enormous Serra Angel statue.America’s Charles Gindy started his trip to this Top 8 at a PTQ, and now he was under the lights, the excitement of the moment showing in his face. Next to his sideboard he had placed a small strip of paper, the fortune from last night’s Chinese food: “You will make a name for yourself.” Gindy’s deck is one of the many flavours of Green-Black Elves, a descendent of Rock decks, with its focus on accumulating small advantages and making use of tons of mana.

His opponent-and Switzerland’s poster boy-is Nico Bohny. His deck doesn’t stop at black and green, going all the way to white for Doran, the Siege Tower. It’s a much more straightforward monster-control deck, backed by Thoughtseize and Profane Command, with tricks out of the sideboard that helped get him where he is today. After shuffling up and being given the signal, they were off.

Bohny’s mulligan to six was made worse by his deck’s decision to serve up a Riftsweeper opening. Grizzly Bear was not what he needed in this match. Gindy outclassed him with an opening of Llanowar Elves, then Wren’s Run Vanquisher and Thoughtseize. Bohny flipped over his hand, showing a second Riftsweeper, Profane Command, Kitchen Finks, and Murmuring Bosk. Gindy sent the Command to the bin.

Bohny drew a land to get his Finks into play on time. Gindy continued to build mana with a Civic Wayfinder and Boreal Druid. Bohny played another unexciting Riftsweeper and hoped his deck would smarten up. He traded it for an incoming Wayfinder, which was quickly replaced by a pair of 2/3 Tarmogoyfs.

Doran showed up for Bohny not a moment too soon, and now Gindy didn’t have a clear path to attack. He made no play and sent it back. Bohny did the same. Gindy drew his next card and smiled.

That card was none other than Chameleon Colossus, who began charging the red zone. Bohny took 8, then started chump-blocking with his Finks. He even had a second one to buy more time, but soon it looked like his best way out would be to rip a Profane Command. Gindy caught him napping with a Thoughtseize, and Bohny showed him a Thoughtseize rather than playing it.

Gindy ‘Seized again, this time catching a freshly-drawn Doran. Profane Command killed the one on the board, and feared up the team for the win.

“Well, this game will be better for you,” said Gindy. “No more Grizzly Bears.” 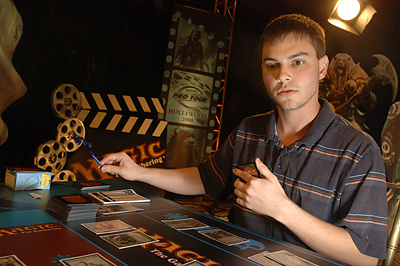 The Kid closes in.Bohny led out the second game with Llanowar Elves, then Thoughtseized Gindy. He was not pleased with what he saw: two land, double Chameleon Colossus, Wren’s Run Vanquisher, and Tarmogoyf. He took a Colossus.

Gindy teased the other one again when he played his Vanquisher. Bohny answered with a Colossus of his own, with three cards left in his hand. Gindy hit with the Vanquisher and added an Elf and a Tarmogoyf to his board.

Bohny showed a Nameless Inversion to get his Murmuring Bosk into play untapped, then used it to dispatch the Vanquisher when it tried to swing in again. This grew the Tarmogoyf to 4/5. Finally, the Colossus came down for Gindy. It swung in on the next turn, and they traded at 8/8. Thoughtseize after combat caught Nameless Inversion.

Bohny untapped and plucked Doran, who traded for the Tarmogoyf before it could get out of control. Whatever joy there was for Bohny evaporated when Gindy tapped five and showed him Primal Command, fetching a Colossus and timewalking the Bosk onto Bohny’s deck. Bohny chumped to stay alive for a turn, but soon succumbed.

Bohny opened with Bosk, revealing Doran, to play the Bird that let the legend hit play on the second turn. Gindy was ready with Wren’s Run Vanquisher, showing a second just in case the first couldn’t stick. Bohny untapped and frowned. He didn’t like any of his options.

Finally he swung his Doran in and made the miserable trade. Kitchen Finks made a poor substitute. Gindy Thoughtseized and took away Profane Command, leaving a second Profane Command and another Birds of Paradise. He added the replacement Vanquisher, this time showing Civic Wayfinder.

Bohny swung in with Finks and Treetop, and Gindy was happy to swap his Vanquisher for the latter. Between another land and the second Birds, Bohny’s next turn was going to be a nice one. Gindy obliged him his second target, throwing out a Civic Wayfinder for a much-needed fourth land. Profane Command for three deep-sixed it and brought Doran back for an encore.

“You could Thoughtseize it...”

“No, but thank you for the offer.”

Bohny settled on Imperious Perfect and passed before Bohny’s Thoughtseize exposed his secrets. He was sitting on Terror, Primal Command, Tarmogoyf and Imperious Perfect. Bohny took the Tarmogoyf, then tightened the screws with Slaughter Pact on the Perfect. His team smashed in for 9, leaving Gindy at 4. 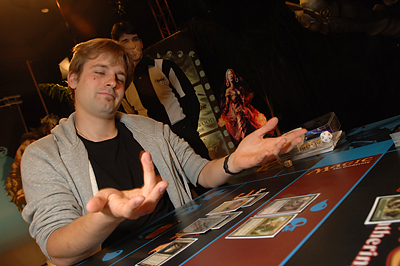 What can you do?Gindy wasn’t ready to pack up. His deck served up a Profane Command, taking out one of the Birds and getting back Wren’s Run Vanquisher. Bohny paid for his Pact and surveyed his options. He swung for one with his Birds and gave it back.

Now it was land number five for Gindy, allowing him to drop Imperious Perfect and Terror the Birds. He was getting dangerously close to completing his stabilization. Bohny untapped and threw down Nameless Inversion, killing the Vanquisher thanks to blanking its creature type. Doran and the Finks swung in, the Perfect chumped, and Gindy was at 1.

Another topdeck for Gindy! This time it was Tarmogoyf, a 5/6 thanks to the packed graveyards, big enough to handle Doran, and cheap enough to let Treetop Village act as a second blocker. Bohny drew and passed the turn.

Now the reversal was complete. Gindy tapped five and cashed in his Primal Command for 7 life and an indomitable Chameleon Colossus. Bohny had six land and no play. His Finks blocked the Colossus when it attacked, and he then drew a Colossus of his own and played it. Terror from Gindy got rid of the anemic Finks.

Gindy smashed in for 8, now that his defenses were solid. Bohny drew a land, but it was only his seventh, and Gindy was up to eight mana. Gindy got to smash through the opposing Colossus, and the following turn took the match.

Charles Gindy defeats Nico Bohny 3-0 and advances to the Semifinals!