Italy had stormed to the top of Pro Tour Philadelphia by placing two members into its Top 8 class, and Quarterfinalist Samuele Estratti represented a full half of their number. One nation that had put even more people into the Top 8? Host nation USA, represented in the match by Andrejs Prost. Both players were playing combo decks, Estratti using Splinter Twin while his opponent had a Pyromancer Ascension–based Storm deck.

The first turns of the match were spent on Preordain while Andrejs had Manamorphose on his second turn. He created a red and blue mana, then used the blue to cast Serum Visions. He passed after that rather than continue attempting to go off while his opponent just dropped a second land before shipping. The third turn Prost attempted Gitaxian Probe but found it stopped in its tracks by Dispel. Or at least, he would have, had the two players not realized the play was illegal and backed up; Gitaxian Probe is actually a sorcery, not an instant, and therefore not a legal target. 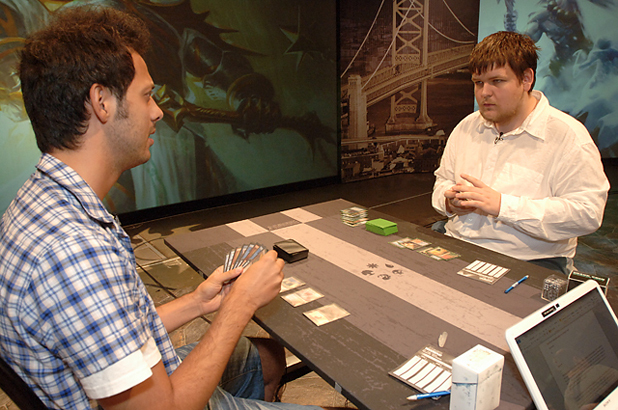 Samuelle Estratti and Andrejs Prost both bring blue-red combo to the quarterfinal fight, but of two different pedigrees.

With that sorted out, the Phyrexian-mana Peek allowed Andrejs to see that his opponent had the Pestermite / Splinter Twin combo in hand as well as two Dispels. That meant Prost would have his work cut out for him in attempting to go off, needing to play through two potential disruption spells. When Estratti cast a Pestermite at the end of his opponent's turn, Prost revealed some disruption of his own, Remanding the 2/1 to prevent his opponent from untapping and killing him.

Estratti had begun missing land drops, forcing him to start discarding cards. He attempted to cast Pestermite for a second time but found the card Remanded once more. Luckily for the Italian player, he found his fourth land drop, while Andrejs continued digging for enough action to go off by casting Preordain.

The two players fought another war over one of Estratti's instant-speed creature halves of his combo, but his opponent proved victorious once more with a third copy of Remand. A turn later a Deceiver Exarch finally resolved for Estratti, but when he attempted to cast Splinter Twin targeting it his opponent was ready. Andrejs cast Mana Leak targeting it, but had that Dispelled. That left his opponent tapped out and allowed him to Noxious Revival for Mana Leak, cast Manamorphose to draw the Leak, and counter his opponent's enchantment.

It was a huge play for the American, who was left still alive in the match. The question was whether he could go off on his own turn with his opponent tapped out. Andrejs went for Gitaxian Probe, but he didn't have enough gas and passed. His opponent tried for a second Splinter Twin, but Prost had the fourth Remand and was able to stop the tricks once more. Now did he have enough to go off? His good fortunes with counters were surely coming to an end...

...or not, as he used a Noxious Revival during his upkeep to buy back a Remand once more. The game began to switch to an awkward Plan B in which Samuele worked to win by attacking with Deceiver Exarch. Two copies of Pestermite soon joined the Deceiver Exarch, and it looked like there was a very reveal possibility Andrejs was going down to the beats. There was little doubt Estratti would take a win however he could get it, but beatdown with blue creatures in his combo deck was a bit embarrassing.

A third Splinter Twin showed up in the nick of time to spare the Italian that fate, and he cast it. Andrejs revealed the Remand he had returned with Noxious Revival, but Estratti trumped with Dispel. Out of action, the American sunk his head in disappointment. He had nothing left to stop the combo and had to head to his sideboard down a game.

The second game started off much as the first, with both players spending their turns on early cantrips and trying to craft the best hand before going off. They had brought in hate for combo decks, but in what form, and in what ways would they adapt their strategies to play around what they expected to see from their opponents?

Andrejs forced down a Pyromancer Ascension and when his opponent attempted to stick Deceiver Exarch he tried to counter with Remand. Estratti had a surprise for him: Disrupting Shoal discarding Deprive! That was enough to counter back, and when the Italian had a Mountain for his fourth mana and Splinter Twin it looked like Andrejs had just lost. Instead, the Deceiver Exarch turned sideways to attack, and postcombat the Italian had Engineered Explosives for two with an eye on the Ascension. He didn't have Splinter Twin! 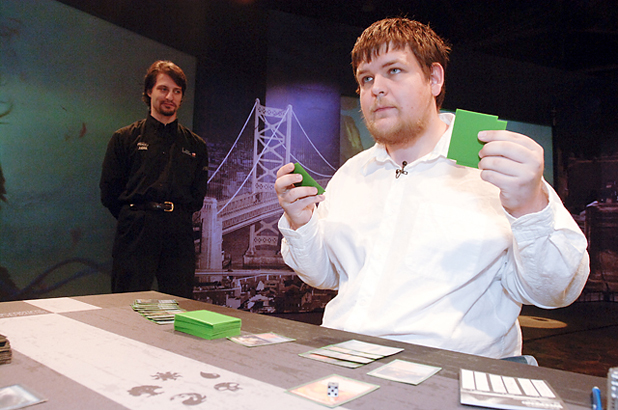 Prost gets off the hook.

Looking relieved, Prost untapped and drew, spared the fate of losing immediately after the blowout from the Shoal. The Deceiver Exarch continued beating down and the players settled into a pace of draw, play a land, go. To break pace, Andrejs made a halfhearted attempt to go off, forcing Samuele to use his Explosives on the Ascension, but the American was expecting exactly that and replaced the enchantment with a second copy.

Spellskite entered the battlefield for Estratti, revealing at least some of the sideboard hate he had brought in for the second game (though he was playing two copies maindeck). The 0/4 was followed by a flurries of cantrips in an attempt to find Splinter Twin, but that series of plays left the Italian down to just two mana on his opponent's turn.

Andrejs sprang into action, using Manamorphose and Noxious Revival to get his Pyromancer Ascension up to two counters and to begin copying all of his spells. The American cast Serum Visions, with a copy, to start digging for combo pieces and looked like he was set to go off. The play revealed his opponent to be holding Kiki-Jiki, Mirror Breaker and Preordain. That meant Prost was free to go off as he pleased, and he began to do exactly that.

The tides seemed inexorably in Prost's favor, but a minor procedural error paused the game. When he cast Preordain, he forgot to draw a card for the Ascension copy, instead looking at the top two cards of his library to scry for the original Preordain. That prompted a call from Estratti for head judge Ricardo Tessitori. The capable Tessitori fixed the game state by having Prost shuffle his library to rerandomize (being careful to leave the known cards on the bottom where they were), and Prost continued, commenting, "I'm such a scrub."

From there he cast a flurry of cantrips, each copy doubled by his Ascension, before using a triple set of Lightning Bolts to finish off his opponent. Estratti redirected a few copies to his 0/4, but when he saw the full number of Lightning Bolts headed his way, he conceded.

The third game started as combo mirrors do, with both players trying to cantrip their way into the pieces they needed to fully combo off. Andrejs made the gutsy play of running out a Pyromancer Ascension, leaving open the possibility his opponent could end-of-turn a Pestermite / Deceiver Exarch, untap, and drop Splinter Twin to win. The bold move earned only a Remand, and the two went back to casting draw spells.

Estratti decided to go for it, and dropped both halves of his redundant combo. When the counter battle had settled, he emerged victorious, and the players headed to the fourth game with the Italian leading by one.

As the cameras pressed in around the two combo players, both opted to open on mulligans. Andrejs ran out a second-turn Pyromancer Ascension but had it trumped by Engineered Explosives from his opponent. Estratti managed to stick Deceiver Exarch and blew up the Ascension with his Explosives to be safe. The 1/4 Deceiver Exarch began attacking while the Italian sat back to play defense against his opponent. 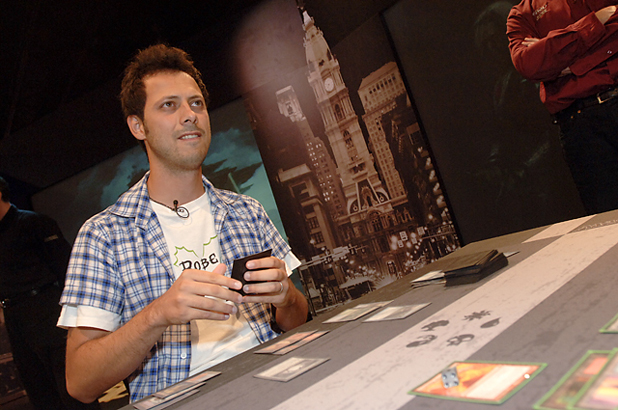 Estratti goes for it.

A second Pyromancer Ascension from Prost was countered, and when Samuele went for Splinter Twin on his Deceiver Exarch, Prost was ready: he cast one Lightning Bolt, then a second to kill the 1/4. But the Italian was ready too! He revealed Pact of Negation to counter the second Bolt, and Prost was finished. The Aura resolved, and Andrejs extended his hand in defeat.

Samuele Estratti defeats Andrejs Prost 3-1 and advances to the semifinals!