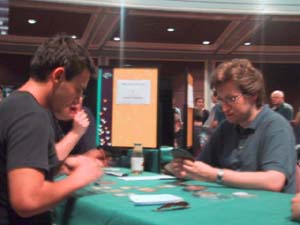 This interesting quarterfinal included the well-travelled Alex Shvartsman and local hero Dan Romans. Dan Romans was undefeated on the first day of the Grand Prix and was able to make the top 8 by posting a 3-2-1 record in the draft portion. Both drafted very good control based decks, Dan with Blue/Black, and Alex with a White/Black. The draft panned out interesting for both players, as Alex began the draft trying to force Blue and White, but the lack of blue in any shape or form on his side of the table.

Dan received the lion's share of the Blue cards, with double Cephalid Broker, Cephalid Retainer and a multitude of Black creature control cards. Alex decided to switch to black quite late in the draft (in the last booster), and was rewarded with Afflict, Dirty Wererat and Gravedigger. His choice to play black dimished to a great extent the three Firghtcrawlers that were chosen relatively highly in Roman's draft.

Roman won the toss and decided to play, keeping a marginal hand of many black cards, Psionic gift and two islands. Shvartsman had a quite good hand that included two Aven Flocks and a Patrol Hound. Dan a didn't draw a black source until his fourth turn, by then Shvartsman had a Hound and a freshly drawn Hallowed Healer in play. With his black land on fourth turn, he was finally able to cast a Frightcrawler, unfortunately it was Afflicted. He was able to finally keep down a creature in the form of a Cephalid Looter. Alex maintained the pressure by attacking with his Healer and Patrol Hound, hoping that Roman's would block and get caught by the Shelter than was sitting in his hand. 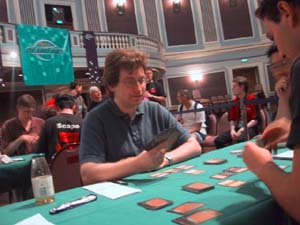 But the local boy didn't fall for the bait, and so Shvartsman passed the turn after he cast an Aven Flock. Romans then cast a Psionic Gift on his Looter during his turn, and killed the Healer before it had a chance to become active. But the Patrol kept up the beats now with a second freshly cast Aven Flock allowing Alex to have air superiority. Dan tried to stop the flying beats by making a Cephalid Retainer, hoping to block the Flocks. Unfortunately for Dan, he didn't see that it didn't have the flying ability, allowing Alex to win the next turn, now having a Shelter to protect his Bird Soldiers when Dan attempted a last ditch Execute.

The second game saw Dan choose to go first, and lead out with a relative quick start with Crypt Keeper and Frightcrawler in his first few turns. Alex seemed to stall on 3 Plains, but was able to summon a Patrol hound to keep watch and the Crypt Keeper from entering the Red Zone. Alex seemed to struggle when presented with Dan's Cephalid Looter, with Alex still stuck on three white mana. Finally Alex was able to peel a Swamp from his library and stop the Frightcrawler beats by getting a Dirty Wererat on the table.

To a great extent the game stalled, with a Pilgrim of Grace and Cephalid Retainer helping the game stall out. Alex attempted to break the stall with a Mystic Zealot, but it was summarily Executed. Alex's draws didn't stop there, with him summoning two Aven Flocks. The pressure became too much eventually, and Dan's final attempt at a Repel targetting one of the two Flocks being Sheltered.