Sunday stage was new territory for both of these players. Chih-Hsiang Chang brought a Red Deck Wins deck and took it to a 12-4 finish in the Swiss. That was good enough to make him the first player from Taiwan to make it to the Top 8. 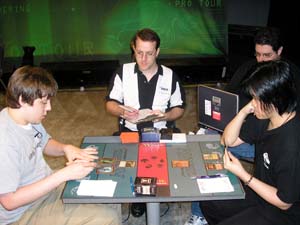 Chris McDaniel has earned the nickname "Star Wars Kid" early in his Magic career. His success this weekend was an example of how mastery of one deck can pay off in a format where so few people have experience. He piloted his Blue-Green deck to a third-place finish in the Swiss but now he will have to try to overcome in a best-of-five matchup to advance to the semifinals.

Chang went second and laid a . On McDaniel's second turn, he had a .

Chang just passed on his second turn as the held back the Lavamancer. Chris used the opportunity to play a and build up to four mana. During Chris's end step Chang fetched a and used to deal the first opponent-afflicted damage of the game, aiming the Helix directly at Chris.

Chang then took down one of Chris's s with . He must have felt his best chance to win was by denying Chris the mana to be able to go off. Chris didn't appear worried as his continued to hang out on the table to stop .

Chris played a fourth land and cast and then passed the turn. With his life still at 17, it would take a lot of burn to finish him off. Chang killed the with a . Chris fetched an but Chang had a second to leave Chris with one and three s.

knocked Chris down to 16. Chris just passed on his turn. Either he wasn't worried or he had no more business spells. Chris played an and once again did nothing. Now Chang threw two s to put Chris at 7. A came across but Chris used a to stay at 7.

Chris cast a second , followed by a . Chang responded with , and to place Chris at 2. Finally, Chris fetched a . The Fact revealed , , two s and a .

Chang split the piles, with the s or Minds Desire/. Chris took the pile with the Gifts. With the three mana floating, he played an followed by a .

Since Chris was on just 2 life the Lavamancer was still a real threat. Even if Chris managed a huge , Chang would be able to untap and use the Lavamancer during the upkeep to kill Chris. He would need to remove the Lavamancer from the board along with the combo kill.

Chris took the bigger pile. He cast a third , two s, and then to untap all of his lands. He recast a out of his graveyard to get the Storm count up to 13 for his .

The revealed another along with a for the instant kill. But would Chris worry about a second ? There was already one in Chang's graveyard.

Chris played a for , and two land. Chang gave him the land but that would allow Chris to for five returning , , two and .

Instead, in response to the killed Chang and ended Game 1.

Chang led with a second-turn . Chris had a but that knocked his life total to 18. Chang went down to 18 to play out a . He also played a for additional beats. Chris played a (down to 16) to bring back the . Chang did two damage to both players with a . He left both cards on top. The first was a to hit Chris's only . Chris took one from the Lavamancer and two more from his own , going down to 11. 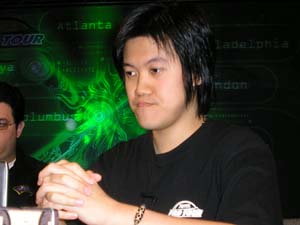 Chang bounced back with a bounty of burn.

Chang sacrificed a for his fourth land. The Nexus animated and attacked for one. Chris was stuck on three land and was visibly upset. After a good deal of thought, Chris passed the turn. knocked him to 8.

Chang drew a to fuel his Lavamancer and threw a at Chris. Chris drew a card and conceded. The damage output from Chang was too great.

After Chris laid a land, Chang wasted no time in throwing a to the head. Chris played a and sacrificed it while Chang did nothing on his second turn. Chris sacrificed the and played a land to get four into play. During Chris's end step he was hit with a . Once again Chang left both cards on top.

In response to a on his lone , Chris played a for , , Nostalgic Dream and . Chang decided to give Chris and an .

Chris played the , the and a for three, returning , and an . He was tapped out after this and passed the turn.

Chang had eight mana available, thanks to the . He wasted no time in swinging with a and hitting two of Chris's lands with land destruction spells.

During Chang's next upkeep he cast a to put Chris at 13. Once again he kept both cards. The first was a that was aimed right at the .

Chris responded with a for , , and a . Chang gave him both mana cards. Chris also cast a before the resolved.

Chris played both the and the to build himself back up to six lands on the table. Well, it was six lands after a cleared the and let the build up to a 3/3. Chang then played a .

Chris was still at 11 life but it was getting close to the time where he would need to go off. Chris discarded his hand to a to retrieve a and a (his hand was , land).

Chang hit for three with the Slith to put Chris on 8. Chris used the newly fetched Gifts to give Chang the choice between , , and . Chang decided to give Chris and .

Chris played down a and cast a for . He then played the , untapping all six of his lands. A here would be only for a measly four cards. He went all-in as he cast a to drive the storm count up to four. That plus the Desire would reveal five cards. He would need a strong set of cards for five.

Chang could feel the win closing in as he gave a hearty chuckle. The second card revealed was a and the fourth card was an to give Chris a chance. The other three cards were all land. fetched , , , and . Chang gave Chris the and a .

Chris cast again. This time he went for , , and . Chang chose for the and to be put into Chris's hand.

Chris targeted Chang with a and responded with a for , then he ed for a second . Chang didn't have enough library left or enough damage potential and conceded. 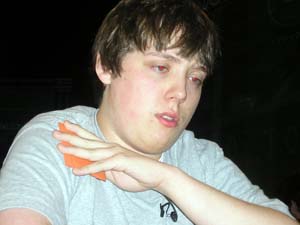 So far the player who had played first won every game of the match. Chang began this game with a , with a on it. The next turn he placed out . Chris took two when he placed out a . Chang missed his third land drop and managed to only play a and a .

Chris played out a second , dropping to 16. Chang still didn't find land with his next turn and could only send his into the fray. Chang cupped his hands over his mouth in frustration from his poor land draw.

Chris went up to four mana when he sacrificed a . He didn't have a land to play, but with four mana open, a blue card-drawing spell couldn't be far behind. On Chang's turn the traded with a .

Chang finally had a third land and d an . Chris responded with a . Chang gave him , and placed and into the graveyard.

Chang used to destroy the returned and Chris sacrificed his to fetch another .

Chris cast a and an to begin his turn. He then used to destroy . Chris floated a lot of mana and cast a second . With all of that mana floating, Chris cast a for five. Once again Chris would need to rely on his deck to help him out.

The Desire showed three s, a , and an . The first effectively ended the game when it revealed a . Chris now just needed to build up an even higher storm count before ending the game with the and combo, and the path to the semifinals was set for McDaniel.