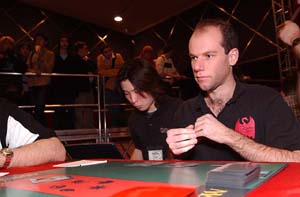 Tsuyoshi "Mister Rolly" Fujita is one of Japan's best-known pros. He rose to the spotlight at Pro Tour Tokyo, where he was the first Japanese player to make a Top 8. This time he's on the path to Masters gold, with red-green beats tuned to beat a Psychatog-choked field. The litmus test is his quarterfinal opponent, Dave Humpherys. The Most Deliberate Man in Magic is running just that deck, and brawled his way through two very long mirrors to get here. His Teammate, Rob Dougherty went so far as to say "There is no force more powerful in Magic than an untimed Dave Humpherys. The clock is like his kryptonite. Nooo! There goes two points!". Humpherys demonstrated this by going 5-0-2 on Day 1 of the Pro Tour.

Humpherys won the die roll, something he really needed in this match. Fujita came out with Llanowar Elves. His Kavu Titan was Counterspelled, and the Elves spawned a friend. Humpherys played his third land and fourth lands without acting, taking two from the Elves.

He played an end-of-turn Fact or Fiction, showing Upheaval Lobotomy, Psychatog, Psychatog, and Sulfur Vent. Fujita split them Psychatogs or no. Humpherys hung his head and sighed, unable to read Fujita. He eventually chose the three-card pile. Fujita's draw worked against him, giving him another land. He hit for two.

Humpherys went back for more Fact or Fiction action. This time it was over Psychatog, Recoil, Counterspell, Upheaval, and island. Fujita split off the 'Tog. Again, Humpherys took the larger pile. He untapped and Lobotomized Fujita, forcing his Urza's Rage. He got to pick between Firebolt and Sylvan Might, at a comfortable eleven life. Five minutes later, the Mights were out of Fujita's deck, and it was his turn again. 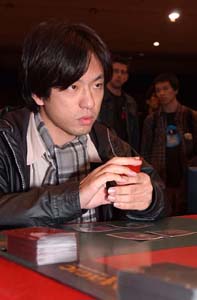 Fujita swung and dropped Humpherys to nine. Firebolt brought him to seven. But Fujita had drawn yet another land, and had to watch as Humpherys resolved the last Psychatog in his deck. Insult compounded injury as he found land again. Humpherys swung in, pitched to do some damage, then played a textbook Upheaval/Psychatog endgame to take the first game.

Fujita scored an early Compost in Game 2, but had his Raging Kavu Counterspelled. He used two Firebolts to dispatch Nightscape Familiar and draw a card, then brought Blurred Mongoose to bear. Humpherys had another Familiar. Fujita swung right past it.

Humpherys stalled at four lands. He swung for one and tried Finkel. Fujita wasted no time in showing him Urza's Rage. He untapped, hit the ground running with Raging Kavu, and then resolved a second Compost. Humpherys's Familiar stayed home. Fujita had no cards.

Firebolt from the graveyard tapped the Familiar and made way. Humpherys thought hard before Slaying the Kavu, falling to eleven. Wild Mongrel came into play unopposed. Humpherys added Sulfur Vent to his board before handing it back. Fujita ripped Flametongue Kavu, tapping the Familiar for still more beats. Humpherys fell to seven. Another Mongrel joined the cause. 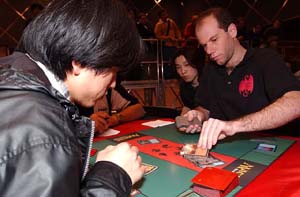 He waited while Humpherys triple-checked his Upheaval and Psychatog. The usually squeaky clean Humpherys even went so far as to make a bit of a mise, keeping the resolved Upheaval in his hand. However, the Hump is a sporting fellow, and revealed his error. Fujita checked to see if he drew an Elf, then shook Humpherys's hand and wished him good luck in the semis.