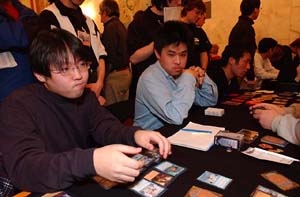 In a rematch of last years Masters finals, the Germans once again face Panzer Hunters. This time it is in the first round of the Masters however. The Japanese must have been rather disappointed when they heard who they were paired with, as the Phoenix Foundation is still undefeated in sanctioned Team Rochester draft. On the other hand, this was their third Team Masters. They did have the advantage of kicking off the draft though. The seating order of the two teams was Marco Blume in A for the Phoenix Foundation, Dirk Baberowski in seat B and Kai Budde in seat C. Panzer Hunter had Itaru Ishida in seat A, Kazuyuki Momose in seat B and Reiji Ando in seat C.

The first booster of the draft gave Momose a Barkhide Mauler and Ando took a Gustcloak Skirmisher, passing an Embermage Goblin, Glory Seeker and Elvish Warrior to the Germans who picked it in that order. Ishida drafted a Crown of Suspicion and Choking Tethers from the leftovers. When Ando laid out the second booster, Kai pumped the fist. With an Akroma's Vengeance, Lavamancer's Skill and Sparksmith in there they were guaranteed two of the three broken cards. Furthermore it would most likely mean that Ando would be primarily white, meaning he wouldn't have to play the Elf mirror, which typically happens in seat C. Indeed Ando took the Vengeance, and the Skill and Smith went to Blume and Budde respectively.

Blume's booster brought the cheery German another Lavamancer's Skill and Baberowski took an Improvised Armor from there. Budde drafted a Solar Blast, and the Japanese settled in their color combinations – U/B, R/G and monowhite for A, B and C respectively. Budde received a Tephraderm and Solar Blast from the next two boosters, making his deck look formidable so far. Baberowski received a Shepherd of Rot and a Gustcloak Skirmisher from those boosters while his opponent Momose drafted a Spitting Gourna and Barkhide Mauler, supplying the Japanese with a ton of fat to throw at Baberowski's clerics.

Ishida's second booster contained a Lightning Rift. While considered by most to be an insane card in triple Onslaught draft, the Rift has devalued a lot with Legions. He still drafted it, passing up on a Shock, which ended up with his opponent Blume. Budde received another Elvish Warrior and Baberowski a Whipcorder, providing him with some defense against the army of 4/4's Momose had. Budde skillfully opened another Sparksmith for his deck in his booster and had Baberowski anti-draft a Riptide Shapeshifter. Blume got a Mistform Shrieker and Momose drafted a Pinpoint Avalanche from this booster.

Baberowski, who was definitely unhappy with his deck so far, opened up his second Onslaught Booster and saw staring back at him ... a Grassland Crusader. Not exactly the pick he was hoping for, especially since the pack contained a Barkhide Mauler, which was certain to end up in Momose's deck. Blume had a Mistform Dreamer in this pack to draft, while there wasn't much else in there. In Blume's booster there was a Daunting Defender that Baberowski sure would've wanted in his Cleric deck. It wasn't to be however, with Ishida counterdrafting it from the Germans. Blume had a Skirk Commando to draft and Ando took his third Gustcloak Harrier from the booster while Momose got a Chain of Plasma from it. Up next was Ando's booster, contained gas like Improvised Armor, Erratic Explosion, Snapping Thragg, Treespring Lorian and a Gustcloak Harrier. They drafted the Armor, Explosion and a Slipstream Eel in order, with the rest of the playables being divided by the Germans. In the last booster, Momose picked up an additional Chain of Plasma.

In Legions, things should get better for the Phoenix Foundation. With Ando not drafting green, Kai has a better shot at the Timberwatch Elves, and Dirk and Marco should be hooked up with some good stuff as well. Ando however, still didn't have a second color. Momose opened up his booster and they divided it rather quickly. A Marauder got added to his deck, and Ando placed his first Daru Stinger on his pile. Blume got a Mistform Seaswift, Baberowski a Sootfeather Flock and Kai drafted a Krosan Cloudscraper. He definitely was looking for the style points with the kids there. Ando's booster provided him with a Gempalm Avenger, adding both a trick, and a soldier for his Daru Stinger to his deck. The Germans picked up a Mistform Seaswift, Corpse Harvester and Gempalm Strider from the booster. Mori drafted a Sootfeather Flock while Momose got a Skirk Outrider. 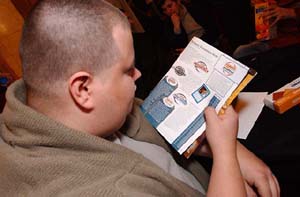 Blume's booster gave Budde a headache. With an Aven Warhawk, Swooping Talon and a Daru Stinger in there, his opponent was bound to receive a good card from it. Directing Blume to pick up the Skirk Marauder in there, Baberowski and Budde drafted the two fliers, so Ando ended up with his second Daru Stinger. The rest of the booster was still rather good though, and Ishida picked up an Embalmed Brawler and Keeneyed Aven from it, Momose an Enormous Baloth and Nantuko Vigilante, and Ando finally took a card in his second color – a Lavaborn Muse. Baberowski picked up a Stoic Champion from his booster, and Budde drafted a Murlodont Berserker. Ishida drafted a Keeneyed Aven and Momose picked up a Skirk Outrider from it. A Needleshot Gourna in Budde's next booster provided him with a reasonable answer to Ando's Harriers, but the Japanese happily picked up the Mistform Seaswift, Krosan Vorine and Goblin Goon left in the booster. Blume and Baberowski picked up a Ridgetop Raptor, and Soothfeather Flock from the leftovers. In the last booster, Budde once again showed his disgust for this draft, where Ishida opened a Timberwatch Elf for Momose. Ishida drafted a Skinthinner himself, and Ando picked up a Goblin Dynamo. Blume received an Echo Tracer and Kai a Crested Craghorn.

With those picks done, their decks were formed. It came across to me as if Budde was going to win his matchup – double Sparksmith and double Solar Blast is hard to argue with. Baberowski looked rather hopeless in his matchup, with Momose having an insane deck with a ton of fat, and the only Timberwatch Elf in the draft. That would mean it came down to Blume versus Ishida. That match seemed to be rather close, with Blume having a slight edge on Ishida, but it could go either way. Regardless this draft didn't look like it was going to go the Phoenix Foundation's way ... but even then, they are the Phoenix Foundation.