Arita did not get the matchup he was looking for. Kenji Tsumura's elegant atog deck has many strong answers for Arita's threats, along with a from the Loam card-advantage engine that is almost impossible for Arita to stop. His deck got him this far, but facing down not only and counters but and Putrefy as well, with and , and taking home three games was going to be even harder. 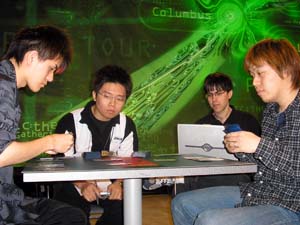 Two powerful Japanese players battled for the right to move on to the semifinals.

His new weapon was that he has seen Tsumura's exact list, which is far more valuable to him than Arita's relatively conventional list is to Tsumura. Could Tsumura's deck have weaknesses that an aware opponent can exploit? Both players have sideboards, but even Tsumura's sideboard seemed to anticipate this matchup. While Arita can bring in , the five cards in Tsumura's sideboard that are not targets for are and - and Tsumura has so few cards to take out that would remain in the sideboard.

Both players were content to develop their mana bases at the start; the first spell was a fifth turn from Arita while Tsumura cracked fetch lands and cycled extra mana sources. Tsumura's draw appeared to be heavy on lands and he decided not to fight against Arita's card-drawing spells.

He started with and then followed it up with Fact or Fiction. Tsumura made an intriguing division, putting and in one pile with Fire/Ice, and Fact or Fiction in the other. Arita had discarded a to the Thirst, so it seemed like the players disagreed about what was important.

The second Fact or Fiction also resolved with Arita choosing and . Tsumura had counters in his hand but he did not seem to consider using them until Arita went for . His plan clearly seemed to be to fight over key weapons like rather than try to counter card drawing.

Even then Tsumura only paused to use and allowed Arita to imprint Fire/Ice without a fight. On Tsumura's end step they had the first fight of the game with an and taking down the before it cold be used a second time.

Arita had managed to gain a substantial edge on cards and Tsumura used his second counter to fight against while playing a to put on pressure before Arita could convert his extra cards. He even removed some of he cards in his graveyard to get in some extra damage, but it would be several turns before he could attempt to do lethal damage. Tsumura's aggressive Fact or Fiction split forced Arita to choose between two of his remaining three s and two card-drawing spells, all but forcing Arita to leave himself with only one remaining . His maindeck was also in the graveyard from an early . He had many extra cards, but turning them into a win was not going to be easy.

Arita used to clear away the that was nibbling away at him, but with all four copies of gone, he had to the Tog's replacement on the next turn. Now his hand had nothing but multiple copies of and , with his only hope seeming to be the still sitting in his sideboard. 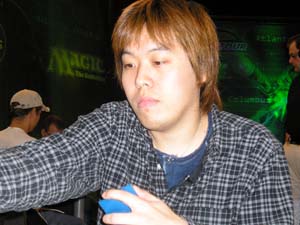 Arita had to churn through the mana math in Game 1.

With only six cards in Arita's library, Tsumura went for a and Arita went into the tank. He had assembled all of his s and several counters for backup, but did he have enough spells to go through Tsumura's library? A third forced a from Arita as he continued to dig for the final . He would need to fire off seven copies of to pull off the win and had only 14 mana to do it with, but he had assembled his hand carefully the entire game and that would be enough.

With no cards in his library, he went for on Tsumura's upkeep. This was it. Three copies of would cost three mana, two and three. That left him enough extra mana to cast Wish for Wish and use to add the final two spells to the storm count. Tsumura would lose if he allowed to resolve, but if he could not stop casting spells would only make things easier for Arita.

Both players had looked through both graveyards and removed from game piles several times, trying to deduce the contents of both hands and libraries. Finally Tsumura let resolve. The other two Chants came next followed by (since would deck him) and then for and then finally for exactly enough cards to finish off Tsumura.

Tsumura took out a , both copies of Last Gasp and the to fit in and . Before Game 3 (and perhaps Game 2, I did not see his sideboard), however, Arita decided that desperate times called for desperate measures. He brought in , taking out an , a and two s, an and a … and also brought in ! If the plan worked, Tsumura would be caught by surprise and beaten to death by 2/1 white creatures.

Arita was forced to mulligan to five and lost his Fact or Fiction to a when Tsumura played it on turn four, playing around the in Arita's hand. Arita decided he was far enough behind that he had no choice and put out the but it ran into Putrefy, and then a drew out the so that could hit the table. Arita went for a final desperate off the top of his library but Tsumura used to get back a previously used .

Once again Arita was forced to mulligan, this time to four, and was reduced to peeling off the top few cards from his deck in hopeful fashion. He tried to assemble some card drawing but the extra cards were too much to overcome.

Tsumura traded off cards in rapid fashion and begun using his from the Loam engine. Kataki got a few hits in, but was waiting on the table if things got out of hand and when joined it, Arita used to tap out Tsumura in the hopes of drawing something off the top that could salvage the game. When he drew nothing, he conceded the game. 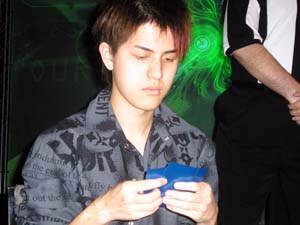 Having shown Kataki, Arita removed them to bring back a , an and a . He had been shuffling his entire sideboard into his deck before each game to hide his intentions - but despite having his spot removal for small creatures still in his board, Tsumura did not even look at his board.

On the second turn, a backed up by went through a and Tsumura took one of two s out of Arita's hand over , and and rushed on to the table knowing that even if Arita had land four that casting would allow Tsumura to resolve , which did in fact resolve two turns later to start the from the Loam engine as faced a face down .

Once again Arita was short on land, having stalled on three and had his fall to . With the extra boost from from the Loam, the went in for the kill and the match.