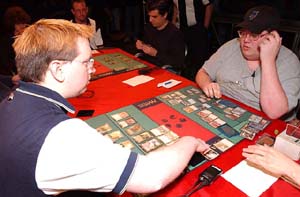 #Wisedraft is an IRC channel where a number of the Pro Tour's finest gather in order to prepare themselves for PT play. Kai Budde, Zvi Mowshowitz, Patrick Mello, Tomi Walamies, Tommi Hovi, Scott Johns, Ben Seck and a host of others often congregate in order to draft with players who they respect in the hopes of improving their individual games collectively, discussing everything from theory to sports to movies in the process. #Wisedraft seems to constantly be putting players into limited top 8s and PT San Diego is no exception: while having only two players in the top 8 is lower than expected for this group, they couldn't have picked finer representatives than Eric Froehlich and Jens Thoren. The quiet Thoren and talkative Froehlich exchanged a little banter while waiting for the go ahead, shook hands and began.

Jens started Game 1 in quick fashion, playing a second turn Soulcatcher, a card he undoubtedly decided to use in light of his first round opponent playing blue-white, but a turn later, when he played a third Plains, it was apparent that he was suffering from a shortage of Forests. Froehlich cast Hallowed Healer on turn three, and when Jens didn't do anything except attack on the next turn, the Healer got aggressive, being joined by Patrol Hound and then Cephalid Looter a turn later.

Eric started sounding pretty cocky, knowing he'd established the kind of board control his deck was looking for, but Jens finally drew a Forest, casting the Mystic Zealot the American should likely have taken in the draft, which was then joined by Diligent Farmhand. A turn later, the Farmhand sacrificed for a Swamp, a second Zealot hit the table.

Efro, apparently excited by being in his first top 8, started having some fun with the spotlight, he started talking into his microphone as if speaking to NASA 'Houston, we have a problem' he quipped as the second Zealot came into play. Eric then cast Psionic Gift on the Luminous Guardian, immediately killing Soulcatcher. Jens then cast his main deck Ray of Distortion, destroying the Gift.

On Jens' next turn, he cast Thaumatog, and when the newly cast Aven Fisher attacked, he sacrificed three lands to the Atog, giving him threshold and allowing the Zealots to block. Eric cast Embolden, saving the flyer. Jens then cast Gorilla Titan and the table was officially locked down before the Swede cast Rabid Elephant, which could have broken through if not for Eric casting a second and third Hallowed Healer. Jens continued to play fat creatures, playing Beast Attack as the table became more and more bogged down with creatures going nowhere.

Froehlich's Auramancer attempted to get things going again, retrieving the Psionic Gift from his graveyard, but Ray of Distortion was flashed back and Eric's path to victory was once again blockaded. Creatures like Limestone Golem and Angelic Wall continued to enter play on both sides of the table. Jens asked for a count of decks that determined that Eric only had nine cards in his library to Jens' fourteen, and Eric immediately started using his Looter to try to even things up, targeting Thoren with it. Jens finally recast Beast attack, then played Nomad Decoy. Eric found his second Auramancer, recast Psionic Gift and Kirtar's Desired Thaumatog. Jens then cast Cartographer, bringing the total to twenty-three creatures in play. Then Rabid Elephant came into play, as did Patrol Hound, prompting the animated Froehlich to ask 'what's the record?' 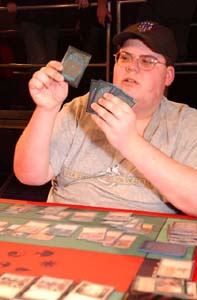 Eric's long-term plan finally started coming to fruition, with Animal Boneyard entering play, waiting for Chamber of Manipulation to join it. The Chamber didn't come down, but the decking gambit seemed to be working, with only three cards left in either player's library.

Amazingly, those three cards, for Jens, were the ones he'd been waiting for: Stone Tongue Basilisk, Last Rites and Overrun. He drew all three with the aid of the Looter and the sacrifice of the Limestone Golem, cast Last Rites, forcing Eric to discard his three Second Thoughts and cast Overrun, after a lot of joking and laughter all around, the Virginian conceded.

Game 2 started with Jens, drawing first, taking a mulligan into a hand without a Forest. The game got off to a blazing start, with Eric playing Angelic Wall, Jens Hallowed Healer and Eric matching the Healer. Three turns in, the game was already in lockdown mode.

Jens cast Mystic Zealot and Eric Aven Fisher, which couldn't successfully attack for damage because of the Healer. Jens cast Rabid Elephant, which was promptly Kirtar's Desired, potentially a mistake as Eric would need to eventually deal with the Zealot if he ever planned to fly through for damage. Cephalid Looter and Hallowed Healer joined Efro's team while Nomad Decoy and a second Elephant joined the fray for Jens, and the wait for Overrun was on.

Eric had a somewhat preventative measure in from the sideboard in the form of Sphere of Duty, and things had really reached a standstill. Eric then found his most important card for the moment: Psionic Gift. The gift started holding Jens' Healer in check, allowing Aven Fisher and Beloved Chaplain to start attacking. Jens life total went from 20 to 18 to 15 to 12 to 9, but then Jens achieved threshold thanks to Wild Mongrel, allowing Nomad Decoy to start tapping the Fisher in addition to the Gifted Wall.

8..7..6..Jens' life total continued to whittle, and then the Chamber and Boneyard entered play. Each turn, while dealing another point of damage, Eric stole one of Jens' creatures and sacrificed it to gain life. 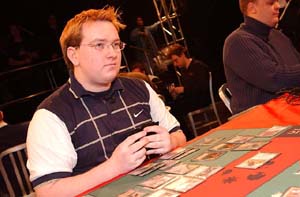 4..3..2..Jens continued to cast creatures, but to no avail. The Chaplain and the Gifted Wall, with the Healer now dead, were all Eric needed to reduce Jens to zero.

Once again, the two players started jamming things up early with three Hallowed Healers getting played in the first five turns. Wild Mongrel and Cartographer succeeded in dealing six points of damage to Froehlich while Aven Fisher did two to Jens, but then, with Luminous Guardian entering play, everything stopped.

Shadowmage Infiltrator entered play, but Wild Mongrel and Hallowed Healer held it at bay. Jens cast Ray of Distortion the turn after Chamber of Manipulation hit play, but it returned to the Virginian's hand by virtue of Auramancer. The Chamber was then destroyed by Flashback, but a second Auramancer prevailed and the following turn, after Stone-tongue Basilisk came into play, the Boneyard came out.

One by one, Jens' creatures were sent to the grave: first the Healer, then the Mongrel. Shadowmage Infiltrator started attacking, drawing out Jens' Embolden. Next the Zealot died, then the Basilisk, then the Elephants and then it was Jens himself: the Swede conceded.

Game 4 started a little differently than its predecessors, with Jens starting things out with Druid Lyrist and Thaumatog while Eric played Beloved Chaplain. Unfortunately for Jens, the tog tapped him out (a potential mistake), allowing Efro to cast Psionic Gift on the Cleric, killing the Lyrist before it could destroy an enchantment. Eric cast a healer and Jens an Elephant before Froehlich played Chamber of Manipulation. The Chamber was immediately Destroyed by Ray of Distortion, as was the Gift, but Auramancer was waiting, fetching the Chamber.

Eric then cast Bamboozle, helping him to find the key ingredient: Animal Boneyard. He put it on top of his library, but was then surprised to find out Jens had two Ray of Distortions. He drew the Boneyard, now next to useless, and strangely chose to cast it immediately, allowing Jens to destroy it if he so chose. If Eric had held the 'yard, he could have cast it when he got the Chamber back with his remaining Auramancer, but Froehlich felt the combo wasn't worth hording for a once-only use. Jens then cast Last Rites, making Eric discard Auramancer, and it suddenly appeared that Froehlich had only one way left to win the game: deck the Swede with the Looter in his deck.

The creatures started hitting play on either side of the table, as did Sphere of Truth, but Jens was definitely taking control. Using the Thaumatog to gain threshold, Jens was able to tap the two Healers each turn. Finally, he used a second Lyrist to kill the Sphere of Truth, and a turn later, Overrun ended the game.

With Eric electing to draw first, Jens was forced to mulligan to six, but his second hand was a keeper, with Druid Lyrist coming out on turn 1, Wild Mongrel on turn two. Angelic Wall joined the fray, blocking the Mongrel. Jens next two turns saw Mystic Zealot and Nomad Decoy, and suddenly Froehlich wasn't talking too much, under a lot of pressure. Kirtar's Desire traded with the Lyrist as the Wall, now enchanted by Psionic Gift, was joined by Patrol Hound. The Decoy tapped the Healer, then the Hound, allowing Jens to get Eric to fifteen.

Two turns later, the nail in the coffin came for Efro: he drew Shadowmage Infiltrator. Falling to temptation, he left only three lands untapped, meaning he couldn't cast Second Thoughts. Jens tapped Angelic Wall, untapped and cast Overrun, attacking with six creatures with a combined power of 31 points, swarming over Efro's blockers for the hard-fought win.