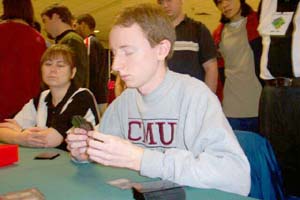 Styx jokes aside, Carl Lobato has every right to be here tonight. The up-and-comer from San Antonio has caught the eyes of pros this weekend, as probably the only competent Angry Hermit player on Day 1. His version was tuned, and he made the right decisions easily. That same skill did him well on Day 2, and now he sits within arm's reach of greatness.

Opposite him is reigning U.S. National Champ Eugene Harvey. Though he might not cut an imposing figure, his reputation precedes him. No-one expects an easy match against Eugene. He is playing Psychatog, developed by the CMU-Togit ensemble, but mostly by danger-seeker Osyp Lebedowicz. He's confident it's the best deck to play right now.

Harvey led with island. Lobato tried Cabal Therapy on Counterspell, and hit, leaving behind Mana Leak, Accumulated Knowledge, Cunning Wish and islands. He played possum, waiting for Harvey to cast his AK during endstep to Entomb a Petradon. Harvey played his third land and passed it back.

Lobato struck. He dropped his third land and targeted the Petradon with Reanimate, threatening a second reanimation spell. Harvey chose to let it resolve, tapping his lands first to Cunning Wish for Capsize. Lobato was ready for this eventuality. He Tutored up a second Therapy before Harvey hit three land again, and stole the Capsize. Harvey's Wonder bought him a turn, but that was all.

Harvey wasted no time keeping his hand for Game 2. Lobato was not as confident. He shrugged, and sent it back. His six were better. Harvey led with island. Lobato played City of Brass, and had an Entomb to answer Harvey's end-of-turn Brainstorm. Harvey played his second land and passed it back. Harvey played Accumulated Knowledge, and again, Lobato had an Entomb. This one fetched Genesis.

Lobato's rain of bombs continued, this time with Defense Grid. Harvey's hand held no counters. He cast Accumulated Knowledge for two in response, but had to let it through. Worse, Lobato had Reanimate for Petradon, putting Harvey back to one land. He failed to draw a third. The Petradon brought him to thirteen. Another left him at six.

But then he ripped a swamp, enabling the Terror he'd just drawn. Suddenly he was back in the game! It helped that Lobato's painlands had done a number on him, and then he forgot his own Defense Grid and tried an end-of-turn Entomb, burning for one. Now the lands were coming fast for Harvey, and his Psychatog came down unopposed. A turn later it was over. 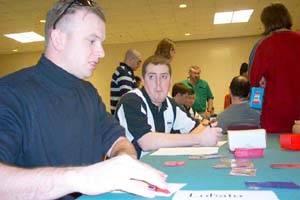 Lobato mulled to six, and then proceeded to bust out a Defense Grid on turn one, thanks to a Mox Diamond. Harvey Duressed back, and saw a hand of Darigaaz's Caldera and Verdant Force, which Lobato conceded was "Not great". He drew Defense Grid and held it, crossing his fingers that his deck would be kinder.

Meanwhile, Harvey Brainstormed and Accumulated Knowledge, digging to a point where he could get some action. He followed up with Psychatog. Lobato played out his second Grid. Harvey swung in for his first point. Lobato hit his fifth land and dropped Genesis into play. Harvey stalled with Capsize with buyback.

Lobato switched gears, bringing Anger to bear, dropping Harvey to thirteen. Harvey continued to swing for single points while returning the Anger, keeping Lobato's mana busy. Behind him, teammates Lebedowicz and Paul Jordan held their breath. He drew, paged through his hand twice, and then attacked with his Tog. Lobato went to mark his score, and Harvey stopped him. He Capsized his own Underground River back to hand with buyback, giving him exactly enough gas to kill Lobato. Lebedowicz and Jordan erupted with cheers.