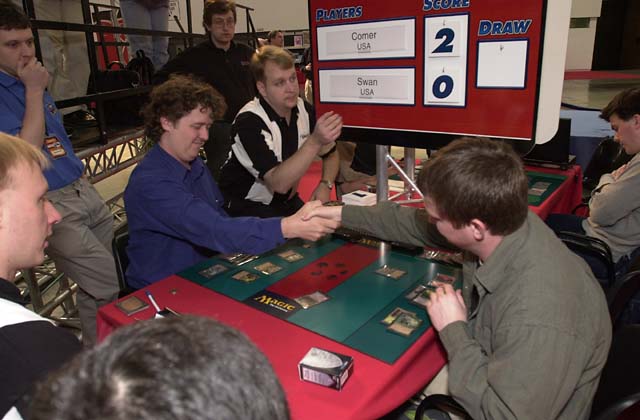 These two Americans, and Pro Tour regulars, walked into the Feature Match happy with their drafts and very hopeful for this quaterfinals. The winner would face the winner of the Dan Clegg-Chad Ellis quarterfinals to set up an all-American semifinals.

Comer came out screaming with a Might Weaver and a Quirion Sentinel producing some very early bruises. Brad tried to stop that with a Thunderscape Familiar but Alan was ready with a Simoon. The next potential blocker was a 2/2 Kavu Scout. He traded it for the Weaver but Comer bounced back with a Nomadic Elf. That elf had a very short life span as he was promptly taken down by a Tribal Flames. The Scout traded with the Sentinel to leave the board squeaky clean.

Brad refilled his side of the table with a Sulan Djinn but that didn't last long either: it went down to the darker half of a well-named Spite/Malice. A Quirion Traiblazer from Comer started to nibble Brad but it was soon dwarfed by him comrades: Verdeloth, the Ancient and his three tokens.

If Verdeloth looked like a game breaker, Brad's Plague Spores put an end to that notion. He also tried to get into the game with a Serpentine Kavu. Comer, however, literally matched that with his own Serpentine Kavu and kept the pressure by attacking with everything. Brad was forced to trade Kavus to stay alive and dropped Mire Kavu in the next turn.

What looked like last swing of the game changed when Swan used a kicked Magma Burst to get rid of two tokens. After blocking, Alan was left with only a single token. It was now time for the Mire Kavu to attack being, replaced on defensive duty by a Thornscape Familiar. The Green Familiar took one for the team stopping the last token. 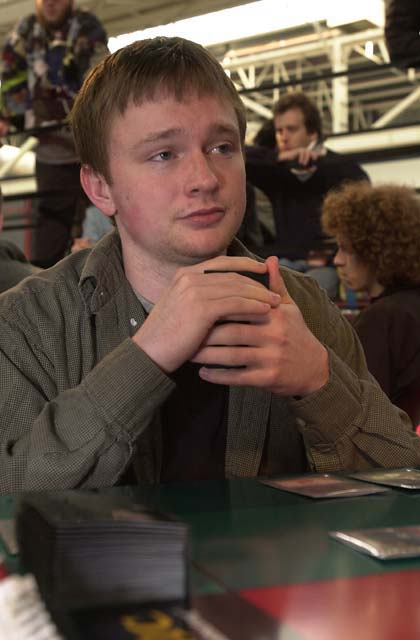 Alan Comer loves flashy plays and didn't disappoint the audience with a big exclamation point: Molimo, Maro Sorcerer! With no answers to the huge behemoth the surprised Brad conceded the match.

The pressure of the Top 8 could be easily felt during the sideboarding and shuffling period with the only sounds coming from the nearby tables and the crowd eagerly leaning against the pit railings. Both players reworked their decks and took the respite to gather their thoughts. Brad was forced to take a mulligan due to land shortage and got a very difficult second hand with only two spells. To make matters worse, one of them was a Darigaaz's Charm that he could not cast since he had no Swamp.

He took a chance and kept it. His deck woke up and gave him a Thornscape Familiar that Comer Singed away before it could harm anyone. The Might Weaver then made an appearance while Brad played a Kavu Scout. After Swan decided not to block the Weaver Comer used a Quirion Trailblazer to find his third land type, a Swamp.

Swan drew a Flametongue Kavu and after thinking for a very long time decided to keep it for a later moment passing the turn. The opposing duo came in for three damage before Comer gave Swan a good target for his Kavu: a Mire Kavu. A second Quirion Trailblazer gave Comer the option to gang block the incoming Flametongue or Scout Kavu. Again Brad went into deep thought under the constant glare of the spotlights and the soft murmur of the crowd. He attacked and lost his Scout to one of the Trailblazers and a Zap.

His next creature, a Serpentine Kavu, was the king of the table only for a few moments because Comer had another legendary bomb: Nemata, Grove Guardian! Brad Swan needed an answer and he needed it fast before the token machine could gather enough steam to overrun his Kavu duo. He attacked with the Serpentine Kavu and Comer surprisingly took the bait blocking with Nemata. A Kicked Magma Burst later he had lost both Nemata and his Might Weaver.

His next recruits were Mirrorwood Treefolk and a Yavimaya Barbarian. Still, with a handful of uncastable black spells, Swan played a Kavu Runner and traded his Flametongue for Comer's next surprise: a hasted Serpentine Kavu.

Still strong in the Kavu theme Brad, once again, found another blocker in a Rogue Kavu. Alan Comer sent everyone in and lost his Barbarian to the Kavu Runner. That proved critical when a Simoon took out Swan's whole army. With no answers, he was forced to concede after Comer played a Kavu Climber and, as a finishing touch, Molimo Maro-Sorcerer. During the whole second game Brad Swam was hampered by his tough mulligan and the hope shattering failure to draw any source of black mana.

Brad: "You have lots of big guys."
Comer: "You have some big men as well, mine just happen to be rare."

Again Brad Swan started with a Thornscape Familiar that Comer matched on the following turn. Alan dared Brad to trade but Swan clearly needed the mana boost to drop bigger creatures, as a hasted Kavu Runner soon proved. A Nomadic Elf jumped in the way of Brad's Familiar. A Mirrorwood Treefolk arrived the next turn to stop the Runner but an Aggressive Urge stopped that plan.

Comer got into the big bruisers business as well with a Kavu Climber. With five lands now, he had no problem losing his Familiar to a Kavu Scout. Brad was real trouble, still without a third land and overworking his golden Fertile Ground just to slow down Comer's onslaught. A second Nomadic Elf joined the fray and blocked the Runner setting up a Simoon or Zap. 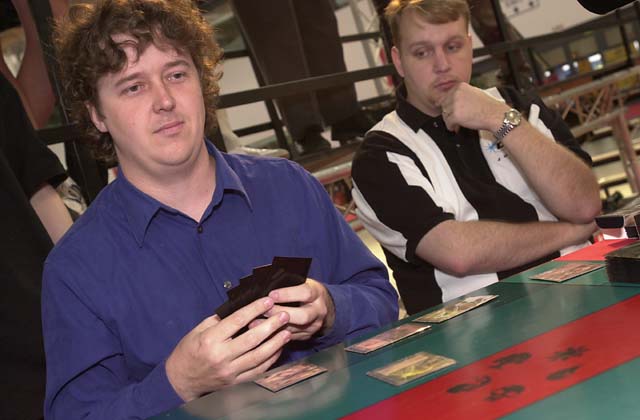 Sure enough, Comer had the Zap and then brought trouble to the table with a Nemata. Brad played a much smaller Kavu Scout and sent his Scout in to crash into a freshly spawn token. He then finally found a third land, a Mountain, and played a unkicked Pouncing Kavu setting up for his Lava Zombie or getting a desperate blocker for the Grove Guardian.

Lack of mana was certainly costing Brad the game despite his best, desperate efforts. The finishing blow was a Plague Spores on the last blocker that forced Brad to concede, giving a sincere handshake.

Alan Comer will now meet Dan Clegg in the semifinals.