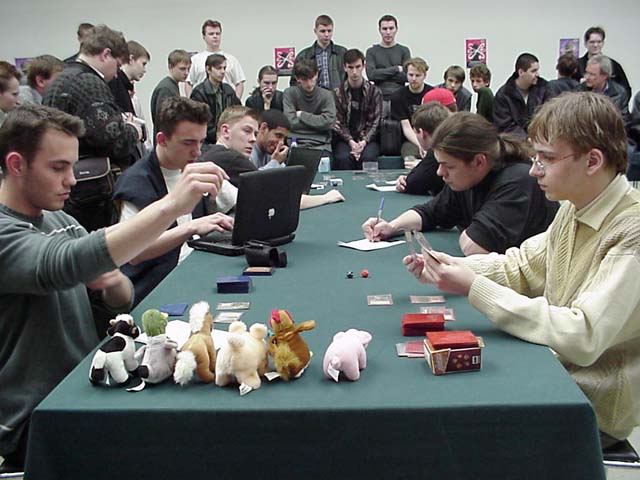 Responding to Antoine's turn two Galina's Knight, Eugene played a Nightscape Familiar taping his two swamps. Antoine played his third land, and announced his end of turn, still not knowing if this match-up was in his favor (red/black), or not (black/blue). As Eugene dropped a mountain on his third turn, Antoine could start breathing, after he absorbed a Rats. On his fourth turn, the Russian played Ravenous Rats again to which Antoine responded with a Fact or Fiction, giving him an Exclude, a Coastal Tower and a Plains, which he discarded. Eugene tried to react but his Skizzik was Excluded. Antoine took the advantage even more on the next turn, in which he traded his Knight for the two 1/1s before Lobotomizing away two Blazing Specters. This left the Russian with nothing but a Skizzik and a Mountain.

The 5/3 hit Antoine only once, putting him down to 18, before he was killed by the Grand Prix Porto winner Rout. On his next turn, Ruel dropped a Dromar on the table, but the Banisher never stays for long against red/black, and indeed it was Terminated. His next turn Galina's Knight was a much bigger problem for Eugene; it was even followed by another Knight on his following turn. Eugene could not deal with it and conceded. 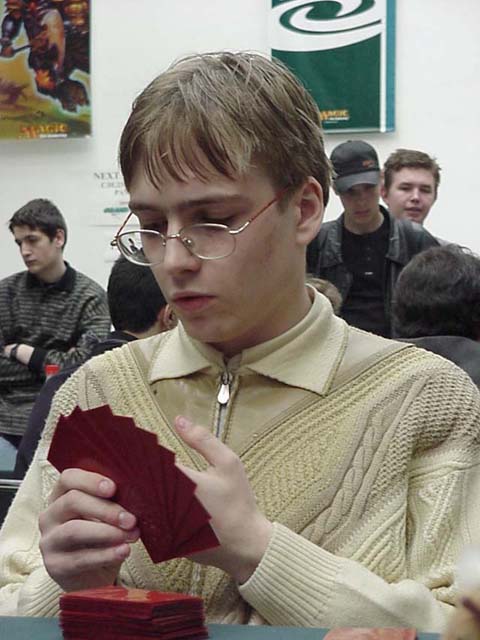 Game two started better for Okin. He dropped a Nightscape Familiar on turn two and removed a Dromar's Charm, helped to an Addle on turn three. A fourth turn Bog Down even permitted him to make Antoine discard a Rout and a Teferi's Moat. But all his previous discard work was cancelled by a Fact or Fiction, which gave Ruel Absorb, Opt and Plains. On his fifth turn, the Frenchman Lobotomized Crypt Angel, letting Ravenous Rats, Agonizing Demise and Ghitu Fire in Okin's hand.

The Russian threw a Ghitu Fire for five to Antoine, putting him down to 11. He added Ravenous Rats as a new, but smaller danger since Antoine had a Rout in his hand, which he played on the following turn. Antoine excluded another Rat, before Absorbing a Blazing Specter on the same turn (20-12).

On the next turn, Antoine drew an Opt, played it and had a good surprise seeing Dromar on the top of his library. Four turns later, the game was over.