When he went into this game Nadebaum thought that it wasn't really a favorable matchup for him, as he had tested it himself many times. However, when it comes to National top 8's playtesting can go out the window and lady luck can carry someone to victory. 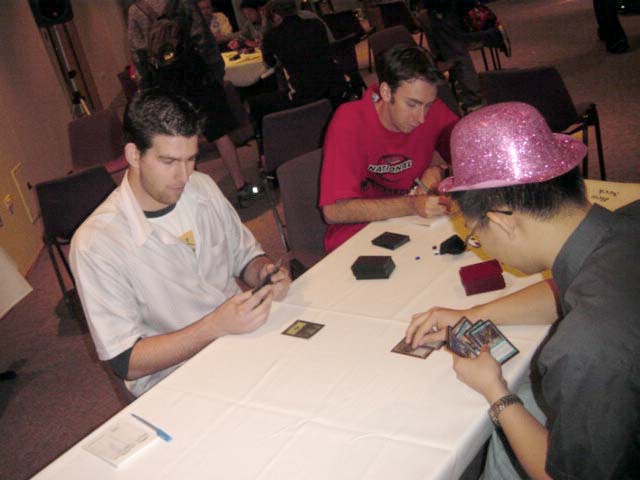 Getting off to a flying start, Nadebaum had his early Birds of Paradise and Llanowar Elf Vendettaed as Seck tried to slow him down as best he could. Normally a control player wouldn't need to do this but Seck had no choice as he was mana shy with only two lands and when Nadebaum dropped a Dust Bowl the untapped Salt Marsh looked like a perfect target.

Luckily for Seck, Nadebaum had no real creatures to capitalize on the situation, all he could muster was a lone Llanowar Elf, pecking away at his decreasing life total. When Seck drew and played his third land, an Underground River, he was forced to recoil it in response of it being Dust Bowled but it was only a matter of time before Nadebaum drew something large and in charge to attack with. Seck searched in vein for an answer to the Blastoderm but was unable to find a Nether Spirit and the two moved onto game 2.

Again choosing to go first Seck was forced to Counterspell a second turn River Boa, and then accumulated his knowledge in response to a third turn Fires from Nadebaum. On his fourth turn Nadebaum summoned a Blastoderm and Seck was forced to Fact or Fiction in response, looking for something that could deal with this untargetable monster. After taking a long time to think Nadebaum split the piles and Seck chose the smaller pile of Accumulated Knowledge and Island. Seck then cast. 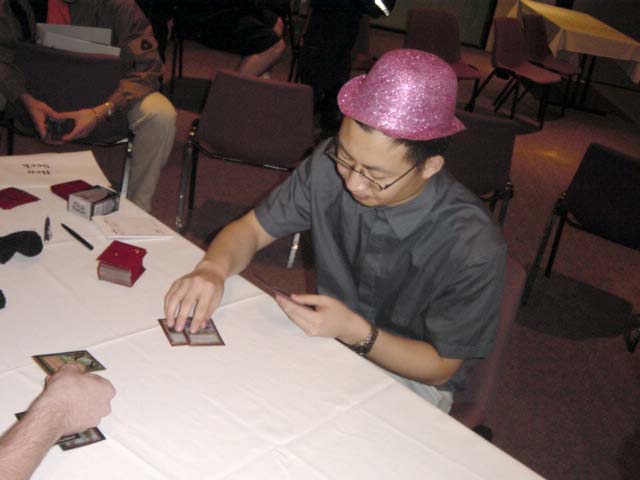 Accumulated Knowledge in his main phase and then again in Nadebaum's end phase, only to see 3 of his Islands Boiled away leaving him with a Salt Marsh and a Swamp. Seck played an Island an was forced to discard, but he had drawn into a Nether Spirit which would stop the damage from the Blastoderm but it wouldn't be available as a blocker until he was on a dangerously low 5 life. Sensing victory Nadebaum cast a Kavu Chameleon and went in for the kill, but Seck had the recoil, in fact Seck was forced to Recoil for the next two times the Chameleon hit the table. When Nadebaum tapped out to play the Chameleon for the forth time Seck had no choice but to Vendetta it leaving him on a single point of life.

Next turn Nadebaum cast a River Boa, which was Countered and the turn after a Saproling Burst which was also countered. Running low on counters Seck had to cast Ascendant Evincar and Nadebaum took the chance to drop a Blastoderm. Seck was forced to then start going on the attack with his Evincar and when Nadebaum dropped the Chameleon on the next turn it pushed past the Nether Spirit and sealed Nadebaum's victory and kept the dream alive.