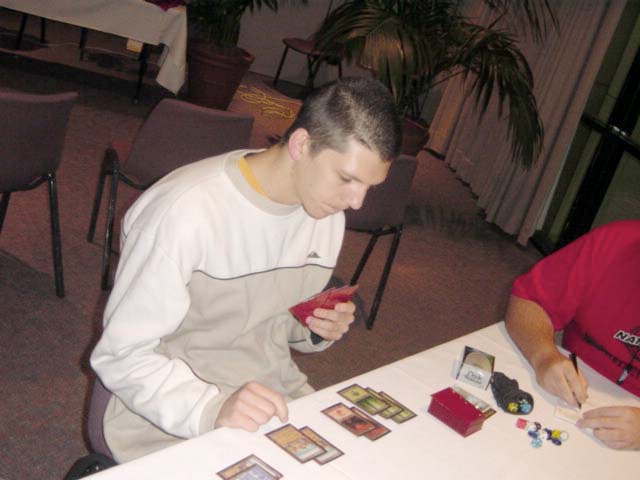 Cael McGann was playing the most popular deck of the tournament: Fires. His opponent for the first of the quarterfinal rounds was Andrew Gordon, who was playing Blue Skies.

Cael opened with a Birds of Paradise which helped him speed to a Shivan Wurm. The Wurm was stopped however by a Foil from Andrew. The next few turns were very unusual for a Fires deck - multiple Rishadan Ports and no creatures. Andrew did manage to sneak in a Chimeric Idol - the perfect creature when locked down by Ports. Cael laughed to himself when he drew into a fourth port, but it wasn't the ideal draw, as the Chimeric Idol was still beating him up.

Andrew managed to build up enough mana to cast a Spiketail Hatchling, but it didn't stay around long as Cael removed it from play with an end of turn Scorching Lava. Cael continued to draw into nothing but mana sources, and it looked as if the Chimeric Idol would go all the way. Cael drew into another Birds of Paradise on the last turn before he would die to the Idol, and conceded the game. 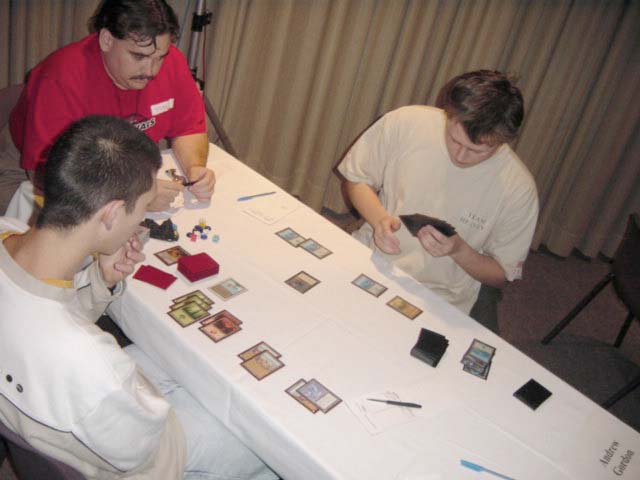 The second game was heavily delayed while the judges reviewed Cael's sideboard cards for sleeve markings. Cael's deck eventually passed the sleeve test and he began with a first turn Birds of Paradise. He used the accelerated mana and played a second turn Fires of Yavimaya. Andrew meanwhile only dropped land on each of his turns. Cael attempted to use his sideboard card, Boil, to take the mana away from his opponent, but Andrew had other ideas. He used his Thwart, paying the alternate cost of returning 3 Islands to his hand, and stopped the Boil. This still left him with no mana in play, however.

Cael started the beats with a Chimeric Idol. Andrew summoned some offense of his own in the form of Rishadan Airship. The players traded blows, with Cael and his Chimeric Idol always one step ahead of the Airship in the damage race. When a Troublesome Spirit was played by Andrew it looked like it could all be over, but a second Fires played by Cael meant he would be able to kill Andrew on the next turn. However Andrew had more tricks up his sleeve - a Submerge played for free bounced the Idol back to Cael's hand. Andrew came over for the win on his next attack phase.