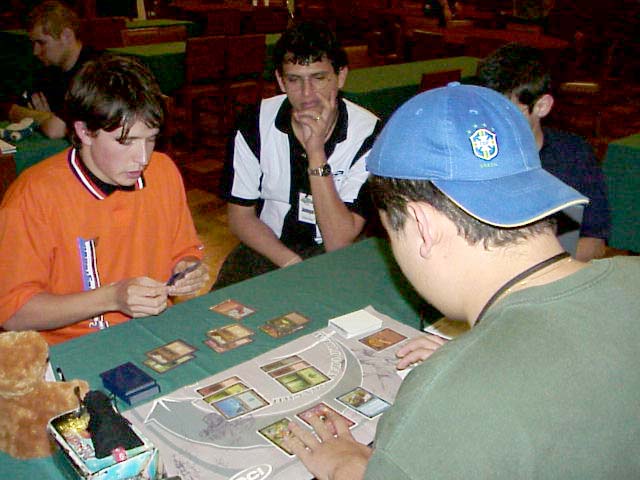 It has been a grueling day, but both Romao and Le Saux were chock full of adrenaline and ready to roll with their Quarterfinals match. Even with all that was at stake they still took the time to wish each other good luck, shaking hands and trading stories about Magic. Romao was especially nervous before the match despite his huge size and experience.

Carlos played a Plague Spitter that Rafael quickly removed with an Assault. A Root Greevil came in as soon as Romao found his first Forest, followed by a Firescreamer, and the Chilean played an Aurora Griffin.

After some deliberation Le Saux played a Quirion Explorer and passed the turn. A kicked Duskwalker joined Romao's army while he kept swinging in with everything. Rafael had enough mana, of all his colors, but still took a very long time to think things out. He brought up the pressure with a Halam Djinn that made Carlos slam the top of his deck with a prayer, probably looking for Red mana or a solution for the big, scary Red creature.

He did drop a huge creature called Serpentine Kavu and the two armies started ignoring each other with the Firescreamer chump blocking the Red behemoth. Rafael again dropped a strong creature, kicking a Benalish Lancer. He was, however, low on life due to the incessant swings of the shady Duskwalker and gently tapped his deck pleading for an answer.

Carlos added another blocker to his wall: Kavu Recluse. The Chilean dropped a Fires of Yavimaya and a Nomadic Elf trying to break through before the minion would finish him. The Black clock would tick only three more times, since Rafael was at seven. Rafael was there with him. With so many creatures on the table it was easy to see the complex math going through Rafael's already tired head. 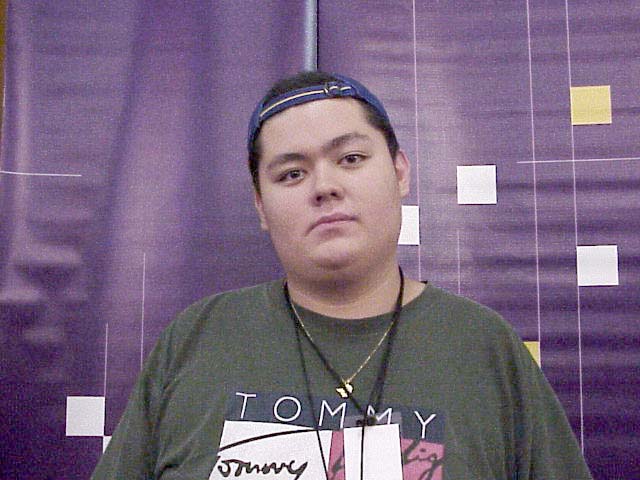 Since there is no time limit in the Top 8 of a Grand Prix Rafael calmly took his time and finally swung with his four creatures lapsing Carlos into deep thought and mumbling. The Greevil blocked the Djinn and Kavu Recluse blocked the Benalish Lancer.

Rafael's eyes widened as he realized that his opponent would be left with an army that would march for the kill next turn. He scooped his cards with both hands, slumping forward in disgust. The tired Chilean got his math wrong, or he tried to bluff his way to victory. Either way he lost the game, and was very disturbed.

The tables seemed to have shifted with the huge Brazilian looking calm and the Chilean shaking and cursing under his breath. Some extensive shuffling went on during a few minutes but the only thing that could calm the Chilean would be a crushing victory.

He took the time to consider a mulligan, maybe even to calm himself. Carlos played the first creature, a Thunderscape Familiar that was immediately stopped by a Pincer Spider. Carlos then dropped a Quirion Trailblazer to get his fourth land type and Rafael pushed the envelope: an Armadillo Cloak turned the Spider into a game winning machine.

Carlos tried to race him by playing a Slimy Kavu and swinging with everything. Both players were visibly nervous as the creatures traded blows. A Flametongue Kavu came in from Le Saux's side killing the Slimy Kavu. Romao had had enough of the Spider and used a Stormscape Battlemage, with the black kicker, to send it away.

This made Rafael slow down a bit but he still took the time to bounce the Flametongue with a Horned Kavu and play a Quirion Sentinel. Romao added a Hooded Kavu to the mix which drew the rage of the returning Flametongue Kavu. When the Horned Kavu came in next turn, Carlos played a Magma Burst, burning the Flametongue and Horned Kavus, the blocking Thunderscape Familiar finishing the job on the Horned One.

Rafael's back was now pressed against the bitter wall of defeat. He lost the Quirion Sentinel blocking, played an Aurora Griffin and removed another creature with a Assault. Then the big boys came in: Duskwalker, Serpentine Kavu and Cinder Shade on Romao's side and a Halam Djinn from Rafael's hand. 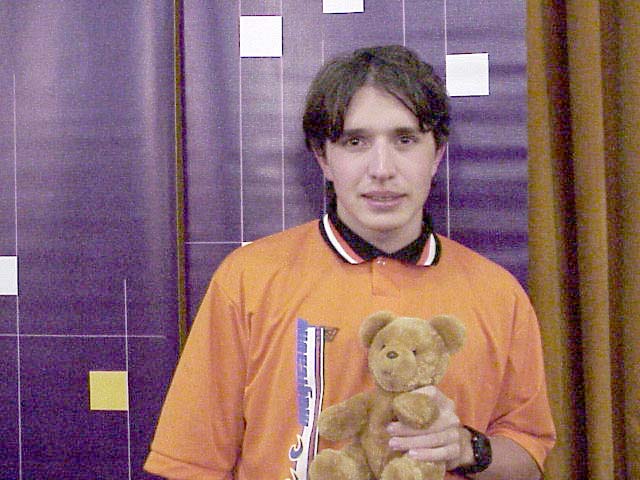 The clock was ticking once again for the Chilean and again he lapsed into deep thought playing a Rampant Elephant and redoing his math. The Aurora traded blows with the Serpentine Kavu and Duskwalker. Romao played an extra blocker to try to overwhelm the Elephant's Luring ability.

After another moment of deep deliberation Rafael attacked with his flyer. Romao considered blowing him up with the Shade but took the damage. He then carefully considered his attack. He took no risks, simply sending the Duskwalker to bring the Chilean down to three and using a Diabolic Intent to get a mortal Tribal Flames.

Rafael took it as the great player he is shaking hands with Carlos and wishing him good luck. They talked about the bad mistake Rafael made in the first game. There is a another twist to this story since Carlos is on a very tight time schedule: he must catch a plane today his hometown, Sao Paulo, one hour away, this very night in order to make it back in time for a class tomorrow morning. If he misses that class he won't be able to go to PT Barcelona or the Latin Championships. So every round he wins makes him even more nervous.