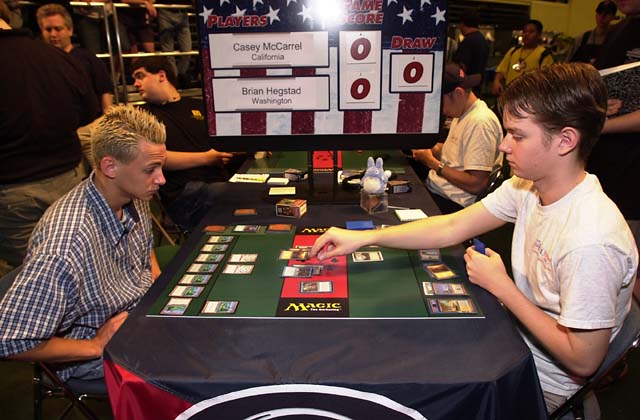 The matchup between Casey McCarrel's Mogo (Mahamoti Dijinn-go) deck and Brian Hegstad's white-blue control deck was by far the slowest of the quarterfinal matchups, but that was because it was also the most complex and interesting. The white-blue deck must win game one by decking with Millstone (or potentially Casey's card drawing) while Casey has just three Mahamotis as damage sources. Game one heavily favors Hegstad, because he has no dead cards due to Casey's need to use a fat Moti to win, while Casey's deck has dedicated creature defense like Tsabo's Decree and Exclude in the main deck.

McCarrel's early turns were just playing islands, but Hegstad was more active. On turn two he played a Tsabo's Web to draw a card, and on turn three he tried for Millstone before Thwart or Foil was practical for Casey. McCarrel had chosen to hold his Accumulated Knowledges because both decks have four and they are much more powerful later on, but he felt that now he had to go searching for a desperate Thwart or Foil - if Millstone went active now then unless he found the one Rushing River he would need to find and force through a Djinn in a huge hurry. But he drew only a useless Force Spike. Another possible reason is that he knew that he would not have the luxury of waiting to use the Knowledges (hereafter AK) later, so he burned one now.

With the Millstone on the table, Casey would have to work fast. To have any chance he would need to assemble a hand that would let him back up a Moti with many counters, which also requires many lands. He also needed to find a Moti. His first attempt at a Fact or Fiction was Absorbed, but for the second one Hegstad had no counter so he responded with his own Fact or Fiction instead since the Mogo deck wasn't in position to punish him for tapping out. The first Fact or Fiction (hereafter FoF) revealed two Islands, a Plains, Wrath of God and Story Circle. If Story Circle resolves, Casey has to use Rushing River on it or he cannot win. Wrath of God isn't quite as good, but will still need to be countered unless he can save his Moti with a Repulse. That's not cheap if it's right after he comes out. Land is valuable in control on control matchups as well, but only to a point. Casey decided to place the Story Circle with one Island, and Hegstad decided it was worth losing a land to get it. Next up was Casey's FoF, which revealed a Djinn, an Island, a Foil, an Underground River and a Repulse. By far the most important card there is the Djinn, since there are only two others left and Millstone is quickly grinding them away. He might well never even get to draw one of the other two, assuming neither is in his hand. Then again, Foil is key in the kind of war that will be fought, paid for with Islands from Thwarting. Deciding that Repulse was just going to get discarded (he was right), he put it with the Djinn and an Island so that he didn't risk a problem if the Djinn was already in Casey's hand. It wasn't, so he had to take it. 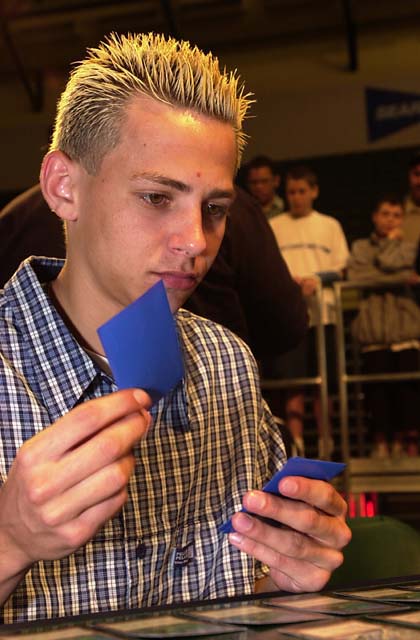 The next few turns, both players played lands while the Millstone started to do its work, but it hit neither a Djinn or the Rushing River. Casey used the second Accumulated Knowledge, and then decided to let a Fact or Fiction resolve, in which Hegstad chose a Story Circle and an Accumulated Knowledge over two lands and a second Millstone. Another FoF had him taking a Foil and Plains over a FoF and two lands. Meanwhile, the Moti decided to come out, although Story Circle stopped it cold - it had already resolved earlier. Only the Rushing River can possibly save Casey from being decked by the Millstone. He never found it, and even if he did he was out of time. Hegstad made some very interesting decisions late in the game, deciding to take a hit from Moti and pass up a turn of Milling in order to keep mana untapped, but he was safe either way. An hour into the match, game one was over.

For game two, both players had to make difficult sideboarding decisions. Hegstad's choice was which to keep out of Wrath of God, Last Breath, Story Circle and Mageta the Lion, taking out his useless cards and clunky Tsabo's Webs. For game two, he decided to have Last Breath and Wrath of God but not Mageta. The reason Last Breath is a question is that Casey had to decide whether to put in Temporal Adept. It is an amazing card if it comes down early and gives him his only reliable way to remove Millstone or Story Circle, but Last Breath has no other targets - he can try to strand them in Hegstad's hand, since it would take a very sure player to not have them and they may well be worthwhile anyway. Casey brought them in, and his judgment calls were to keep Tsabo's Decree in the deck and take out two Accumulated Knowledge and a Fact or Fiction. Accumulated Knowledge is very good but he decided that it was making his opponent's copies even better. Also, if Hegstad was convinced there were four in Casey's deck then he would likely hold his copies for later, making them much worse cards than they would normally be and even setting Casey up to bring his copies back in later in the match. Five games gives players a lot more room to play mind games with each other. The rest was just taking out useless cards.

Casey decided to keep a hand with two Opt and one island, and for a second it looked like it might be a very quick game - he drew the second island as the second card off the second Opt. Hegstad tried to take advantage with a Millstone but it was stopped by Force Spike. A Story Circle was stopped by a hard cast Thwart, as Casey pulled land after land off the top stumbling only three times in the next ten turns. There were a few battles, but the interesting turn was when there wasn't one: Casey let Millstone resolve to hold his counters for a fight over a Djinn. The next turn, the games began. Mahamoti. Absorb it. Gainsay Absorb. Suddenly the Moti was on the table, as Hegstad (who had started with only Plains) did not have enough blue mana to keep using his counters. The second fight was over a topdecked Story Circle: Foil the Circle. Absorb Foil. Counterspell Absorb. Gainsay Counterspell. Thwart Gainsay. The stack resolves and the Circle is countered. Down to ten, Hegstad draws a Wrath of God off the top. Finally able to use the last of his counters to good effect, he forces it through and Fat Moti is toast. 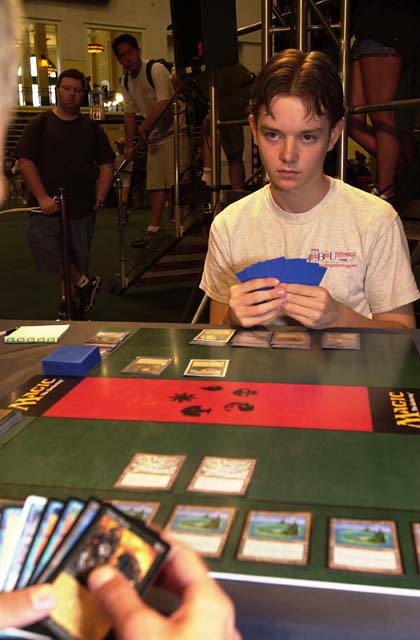 As the Millstone honed in on Casey's library, both players rebuilt their hands. Finally, Casey had drawn a great package of counters and was ready to go for the game. Djinn went on the stack and Hegstad decided to liquidate his Accumulated Knowledges. The first one was for two and quickly resolved, but the second one was for three and a really close decision. Casey sighed a lot, but finally decided to let it resolve. After the two players traded Counterspells, the match was rudely interrupted by a very strong blast of triumphant music from the stage area. When that died down, they traded Foils and then Hegstad was out of gas. All he had left was a Wrath of God and a Last Breath, but Casey had just thrown his only Temporal Adept to a Foil - the other three were still in his deck. If Hegstad had tried to Wrath, all Casey had left was Memory Lapse, but he decided to wait instead. Casey drew Opt off the top and used it to find Counterspell, while Hegstad drew nothing but land.

Game three was much faster. Hegstad took out Wrath of God for Mageta the Lion (all four copies), but that never mattered either way. He started with two Coastal Tower and stalled at three lands. He decided trying for a Millstone was better than discarding it or a Counter. Casey used Memory Lapse to make his mana situation even worse, and put out Temporal Adept. Hegstad didn't even have a Last Breath, so the Adept went to work locking him at two lands. There was a tiny chance he could draw perfectly and only end up with a crippled position, but he didn't and a second Adept quickly finished the job. Once he was theoretically locked, Hegstad scooped a turn later.

After they finished shuffling, Hegstad called a judge. After a conference, Casey McCarrel was disqualified from the tournament and Hegstad advanced to the semi-finals.