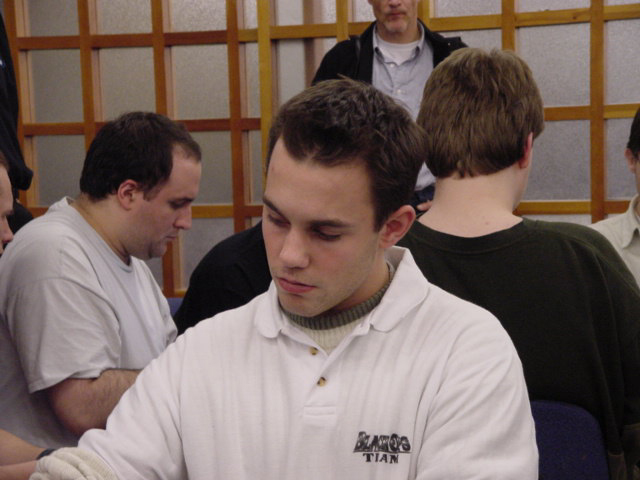 The best two decks of the draft faced off in this quarterfinal matchup and both players were reasonably confident. Antoine was one of only two green players on the table and there were only three white players there too, so his green/white beating was of sturdy build. Chris, however, had built a r/b beatdown DOUBLE VOID deck.

Antoine rolls a 20 and elected to play first. An explosive start saw him throwing out 2 Llanowar Knights and a Razortooth Griffin. Chris could not do anything about the Knights so he had to sit back with his Hate Weaver, and his Kavu Aggressor could not block or attack either. In no time at all Chris was down to 6 life and there were two Glimmering Angels on the board too to join the Razortooth Griffin and the one remaining Llanowar Knight. (One of them had died to a 1/1 red blocker and a Zap.)

Chris had to draw a land off the top or he would have been dead because he had a Void and had stalled on 4 mana, and sure enough he did. He cast Void for 4 and took out all three fliers, then attacked with his Aggressor as his Sparring Golem could hold off the remaining Knight.

Antoine managed to draw a Shackles and some creatures from this point, but none of them were big enough to deal with the Pouncing Kavu that followed. Chris also added a Rage Weaver and removal in the form of a Plague Spores and an Exotic Curse. After the creatures traded, the Pouncing Kavu and Sparring Golem were left to do the final damage to the Frenchman.

Antoine went first and took a bit of a risk with his 2-Plains hand. Sure enough, he managed to make his turn 2 Benalish Trapper, but stalled on 2 Plains until turn 4, incapable of casting anything on turn 3. Chris made an Aggressor on his turn 3. 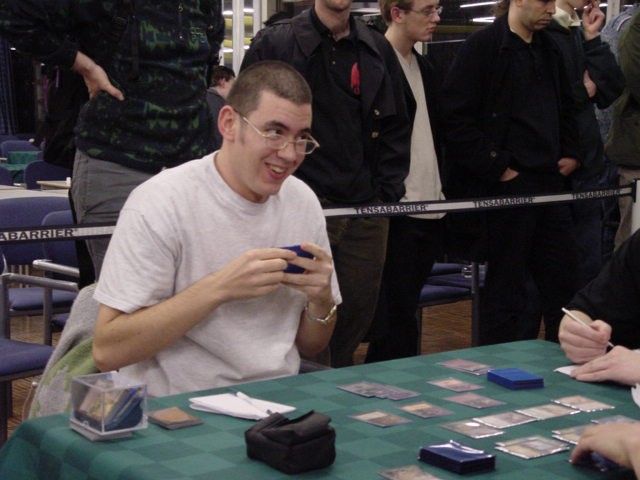 On Ruel's 4th turn, he was relieved to draw a forest and made a Quirion Sentinel, producing another green mana, and then lay his second Sentinel - this time naming 'Pink' mana and burned for 1. The Aggressor attacked and traded with one of the Sentinels, then the other Sentinel was immediately Zapped.

In his 5th turn Antoine could play nothing and just said "go," then he played a Llanowar Knight on his 6th. Meanwhile, Benafel made his Sparring Golem and a Hooded Kavu.

Finally, on turn 7, Antoine drew his fourth land and could lay his Benalish Heralds, leaving him tapped out. Unfortunately for him, Benafel's hand was obscene. First he Annihilated the Heralds, then he Voided for 2 (killing both the Trapper and the Llanowar Knight), cast Exotic Curse on Ruel's fresh Razorfoot Griffin, made a Rage Weaver, then cast Void for 5 on the last creature on his opponent's side - a Serpentine Kavu.

In desperation, Antoine cast Harrow in his upkeep to try to find an answer to the Weaver and the Kavu, but he drew nothing.