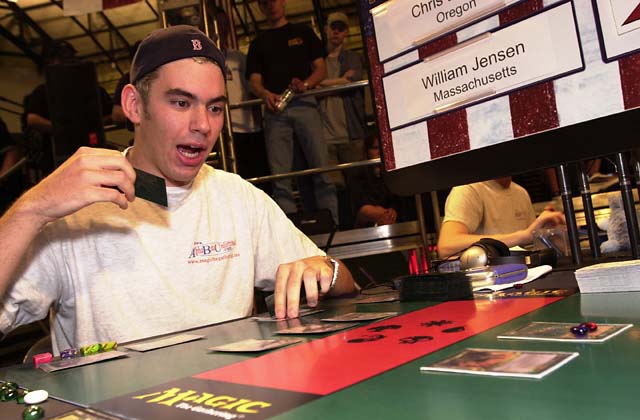 In a match pitting two big men with big personalities and similar decks against one another, Billy Jensen and Chris Benafel, both playing Fires, appeared loose for their quarterfinal match. With a friendly handshake, they wished one another good luck and proceeded quickly into the match, with Billy winning the coin flip.

Billy's draw appeared less than perfect, with no turn 1 play, while Chris came out the way he wanted with a first turn Llanowar Elf. Turn two saw Jensen take a point from City of Brass as he played a main deck Barbarian, with Chris evening the score, tapping his Karplusan Forest for red mana in casting Fires of Yavamaya. Billy attacked with the Barbarian and cast a Fires of his own, leaving the score at 17-18 in his favor before Chris played a Blastoderm that, thanks to the enchantment in play, was able to attack immediately, taking Billy to 13.

With what had to be seen as a deficit, Jensen closed the gap a little with a Thornscape Battlemage, whose kicker ability targeted Benafel's Elf. Chris, with no fourth land, thought for a while before deciding to sacrifice his Fires of Yavamaya to save the Elf, as his hand full of heavily costed spells, required the mana the 1/1 produces. The Battlemage resolved and attacked for 2 while the Barbarian stayed back, presumably to chump block the Blastoderm, leaving the score at 15-12 in Chris's favor.

After the 'Derm attacked into the waiting Barbarian, Chris played what may be the most defining card in the standard environment; Saproling Burst. Knowing the Burst tokens would block anything he would attack with, Billy could not attack on his turn, playing a Blastoderm and passing the turn. With this passing came a crucial decision for Chris: how many of the counters (represented by Mentos) should be removed from the Burst. With Billy's defending Blastoderm an intimidating force, Chris only removed the one counter, and when the resulting token and the Blastoderm attacked on the next turn, the Thornscape Battlemage chump blocked, leaving the score at 15-7 in Chris's favor.

Chris wasn't done yet. With a hand full of spells, he tapped five lands to cast a Kavu Titan, which would be capable of trading with the Derm if Chris deemed it fit to do so. With the Blastoderm's path now blocked, it could only stay back as Bill saw the game falling away. Chris removed another counter from the Burst, leaving him two 3/3 tokens, and on his turn attacked, at which point Jensen conceded.

With Baby Huey's deck containing four metagamed Yavimaya Barbarians, a weak card in the match up, it was expected that Chris would have the advantage game one. Unfortunately for Benafel though, after sideboarding, the match up shifted to Billy's favor with Slay, a powerful anti-green card in his sideboard. Chris, knowing how good the card was in the match up, commented on how good Jensen's Sulfurous Springs would be now. Jenson only smiled, knowing Chris was probably right.

With Jensen losing the first game, he chose to play first in game 2, prompting Chris to smile, saying 'It didn't work the first game; maybe you should try something different". After the two finished laughing, Billy chose to keep his hand, while Chris appeared to almost be in pain as he considered mulliganing, finally electing to do so. Drawing a considerably better six-card hand, Chris declared his readiness before Billy played a first turn Birds of Paradise, which Chris deemed 'BS' before playing one of his own. Unfortunately for Chris, Billy's became active first, allowing him to Slay Chris's Bird, gaining him a huge advantage.

Chris played a second land and a second Bird before Baby Huey played a third land and passed the turn. The friendship between the two became obvious by the banter employed by both, with Huey asking mockingly how many cards Chris held in hand before Benafel played a 2/2 Kavu Titan and a Rishadan Port, using it on Huey's upkeep. Jensen played a fourth land and a Fires of Yavimaya and was done his turn.

On Benafel's turn, after the Titan had lowered Huey to 18 life, Chris cast Blastoderm, an interesting decision considering the Fires of Yavimaya in his hand, but on Billy's turn it became apparent that it likely didn't matter, with a 7/7 Shivan Wurm hitting the table, followed by the recasting of the Bird that had been returned to his hand. Chris thought for a while, finally saying "I'm going to lose this game" to which Billy responded "yeah, you sure are", with Chris finally playing another 2/2 Titan.

On Billy's turn, he tapped five mana, played another Wurm and attacked with both. The Blastoderm and a Titan trading for one Wurm, amidst laughter from both players laughing at Chris's predicament. Billy's next turn saw a third Wurm hit the table and the players moved to game three.

Both players started this game with Llanowar Elves with Chris playing a Rishadan Port on turn two and relinquishing the turn, as did Huey on his turn after being Ported himself. With his Port tapped at the beginning of turn three, Chris played a mountain and cast Ghitu Fire, killing the Elf in an attempt to gain some mana advantage before Billy took a turn in which he played a Forest and ended his turn, Porting Chris's Port after the turn was up. 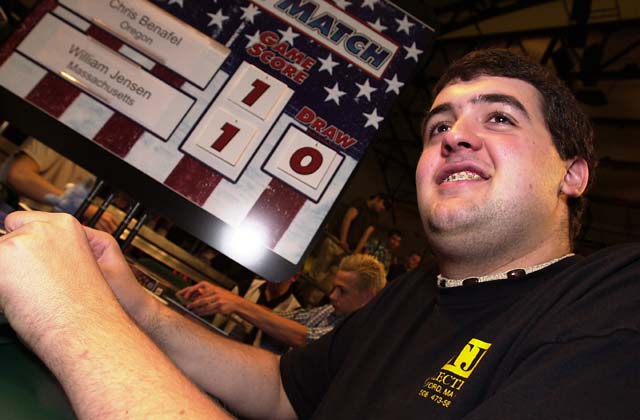 After the Elf attacked for 1, Chris cast a Fires of Yavimaya, leading to his next turn, when he cast Llanowar Elf and Saproling Burst, making three tokens while asking "How many cards?" When Huey answered "six", Chris then asked "How many Slays" to which Billy, smiling, said two, later admitting he'd lied as he actually had three in hand. Billy then proved that he wasn't too far off, Slaying one of the token as he went to 9 life before casting his own Burst. Finally, after Chris stopped and thought for five minutes, he decided that the time was now and attacked with the two remaining 3/3 tokens and two Elves. Huey made three 4/4 token creatures, blocking the two tokens (one of which was then given +2+2 by the Fires) and an Elf, losing one point and going to 8 before Chris killed a second token with a Flametongue Kavu. Huey then cast a Bird that was immediately gated by a Shivan Wurm, stabilizing the table again.

On Billy's next turn, he cast Fires of Yavimaya and with two cards left in his hand, attacked with one of his Wurms, taking the score to 13-7. With Chris's turn only mustering an Elf, it appeared that Jensen had things under control, and he showed it by then attacking with both Wurms. Chris triple blocked one of them with the two Kavus and the Battlemage, but Huey had the Slay waiting, sacrificing the Fires to kill all three, keeping his Wurm alive and dealing 12 points of damage, leaving the score at 7-1 in his favor. After Chris drew, he attacked with the Elf, putting the score at 6-1, and Billy's attack ended the game.

Between games, Chris commented on how strong Jensen's draws had been, to which Billy responded "my draws have been awful" Chris then reminded Billy he'd drawn Slays and Shivan Wurms, at which point Billy reminded him that if he had those cards, maybe Chris would draw them too.

With Chris playing first, it was Billy who cast the first spell, an Elf on turn 1. After Chris played a Port and activated it on Jensen's upkeep, the Elf attacked, was joined by a Brushland and the turn ended. Turn three saw Chris draw and play an Elf of his own two turns later than he would have liked, at which point Huey played a Fires, passing the turn. Chris cast Ghitu Fire, making Huey sacrifice the Fires, as he needed the Elf to cast a Blastoderm. Chris then cast Thornscape Battlemage, killing Billy's elf, but the uncommon couldn't stop the Blastoderm as the score went to 19-14, at which point Billy cast a second Blastoderm.

Chris wasn't dead yet though. On his turn, he cast a Shivan Wurm, which Billy matched, returning one of the Blastoderms to his hand. On Chris's turn, he cast a Fires of Yavimaya, allowing him to solidify his defense with the Wurm. On Chris's next turn, he cast a second Wurm, returning the Battlemage. He then attacked with the first Wurm, trading with Billy's, at which point Jensen killed the second with a Slay, after which he cast the once-gated Blastoderm, appearing to have a major advantage.

With the table out of his control, Chris decided to take the direct approach. He played a Thornscape Battlemage taking Billy down to 9 with the kicker. Billy then attacked with his remaining Derm (the other had been lost to fading) evening the score at 9-9, after which he cast a Saproling Burst.

After a long time, Chris cast Ghitu Fire on his turn for 7, taking the score to 9-2 in his favor, but Billy made three tokens with a Flametongue Kavu in hand, using the Kavu to kill a blocker and attacking for the win.