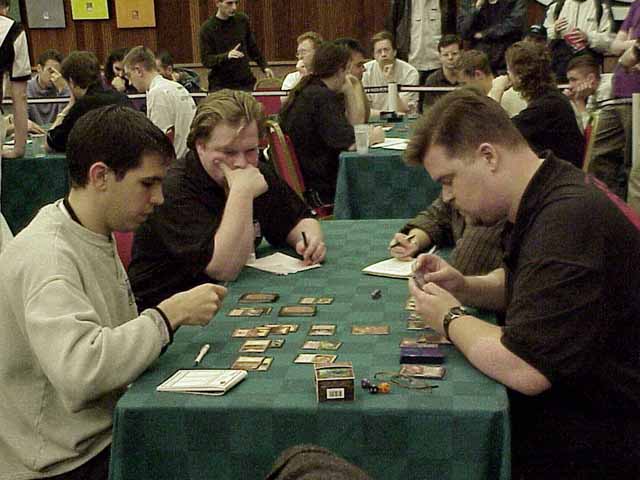 In the quarterfinals, Darwin Kastle from the United States faced Marc Hernandez from France. Darwin had drafted a strong black, red and blue deck with bounce, burn and good creatures while Marc had a white and green deck with a little black and red.

Marc went first in the first duel, but he had to mulligan once. Still, he played a turn two Obsidian Acolyte, a pretty good card against Darwin's black spells and creatures. Darwin played a turn two Shivan Zombie, but still, Marc chose to attack instead of holding the Acolyte back, obviously going for the quick beats. Darwin sent his Zombie once, and played a Kavu Aggressor, while Marc dropped a Nomadic Elf and sent the Acolyte over again.

Then Darwin actually seemed to make a mistake. He attacked with the Zombie while Marc had a white mana open, and so Marc blocked it with his Nomadic Elf and gave his Elf protection from black. Darwin thought about it for a while, then he reluctantly let his Zombie die before playing a Hooded Kavu.

Marc didn't exactly have big creatures. He played a turn five Quirion Trailblazer, retrieving a swamp from his library. But the Trailblazer was a weenie compared to the Halam Djinn that entered play on Darwin's side of the table during the next turn. The Djinn and the Hooded Kavu brought Marc down to seven life, and after chumping the Djinn, Marc found himself at five. The Frenchman then drew his Crimson Acolyte, but it was a little too late as Darwin had drawn and played his Pyre Zombies. Two zaps from the Zombies, and the two players went on to game two.

Hernandez mulliganed again in game two, but he got a much better start than in the first game. He dropped a turn two Llanowar Knight and then turn three Quirion Elves and a turn three Rooting Kavu after sacrificing his Geothermal Crevice. Darwin had a Zap for the Elves, but other than that, he played land only during his first four turns. He held a Repulse in his hand, but as he was without blue mana, he couldn't cast it.

Over the next turns, Darwin took a lot of damage from the Knight and the Kavu. Marc also cast a Verduran Emissary that joined the attack after a Phyrexian Reaper jumped in front of the Rooting Kavu. Darwin didn't really have any answers to the onslaught, and finding himself at eight, he played a Cursed Flesh on the Emissary to reduce the damage. Finally, he seemed to be able to stabilise the situation. At five life, he got a Halam Djinn on the table and then he cast a Phyrexian Slayer.

Unfortunately, Marc had drawn a Wallop, and he Walloped the Slayer and attacked with his Emissary eventually bringing Darwin down to two. But Darwin refused to die. He cast a Shivan Zombie that was sacrificed to the Emissary as Marc drew and played an Obsidian Acolyte. Marc attacked and brought Darwin down to one, but then Darwin drew an Island and started doing stuff. He Washed Out to send Marc's green creatures back to his hand, and then he played a Cinder Shade. The two green creatures entered play again along with a Quirion Elves, but the Acolyte was Repulsed and the Elves were killed by the Cinder Shade before the protection from black stuck to it.

Darwin finally cast his Nightscape Master, but it came too late to do anything at all. Marc simply re-cast his Obsidian Acolyte, gave his Emissary and Spider protection from black and attacked for the game.

The final game lasted for seven turns. Darwin got out a turn two Sapphire Leech and started hitting. Marc got out his Quirion Elves, but again, they were Zapped down before they could do anything at all. Darwin then played another flyer, a Phyrexian Slayer, while Marc Harrowed and played a Yavimaya Barbarian and an Ancient Kavu.

Still, none of Marc's creatures could block Darwin's flyer, so Marc had to try another tactic. He Scorching Lava'd the Slayer and played a Crimson Acolyte that wasn't of too much help. Darwin sent his Leech and his Reaper in and brought Marc to seven life, and Marc tried to go offensive by summoning a Serpentine Kavu before attacking to get Darwin down to six, holding the Acolyte back. But Darwin had a Soul Burn, and with enough power to kill Marc, he removed the Acolyte and attacked for the victory.