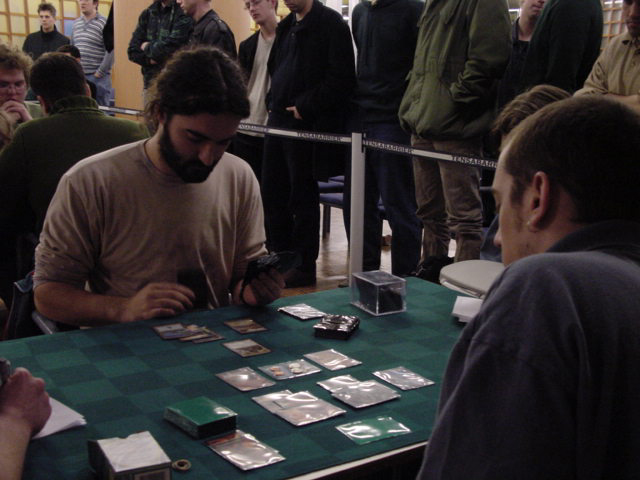 David Price had drafted another red/black/blue deck with Yawgmoth's Agenda again and was looking for his first big tournament win in a while. Xavier Curto Vives had drafted predominantly white/blue/green but also had Harrow to find the swamp to pay the kicker on his probe. Price won the coin flip and opted to play first.

Price started fast with Shivan Zombie then Kavu Scout. Curto harrowed to fix his mana and then stalled Price's charge with tappers, shackles and a Benalish Heralds. Price couldn't really get round double shackles. He'd knocked Curto down to 5 and did have a Soul Burn to finish the Spaniard off in the deck somewhere. Unfortunately he kept drawing land and eventually Curto made enough fat monsters to finish him off.

Curto paid the price for playing 4 colors when he laid only 3 plains in the second game. Price started knocking his life down with an effectively untouchable Shivan Zombie. The only creatures Curto summoned were white. Price used a Soul Burn to leave Curto dangerously low on life. When Price dropped Yawgmoth's Agenda next turn Curto conceded knowing Price could recast the burn from the graveyard.

Turn 3 Harrow, turn 4 Probe with kicker from Curto and the American was in trouble. An Armadillo cloak on a Spirit Weaver spelled the end for the American.