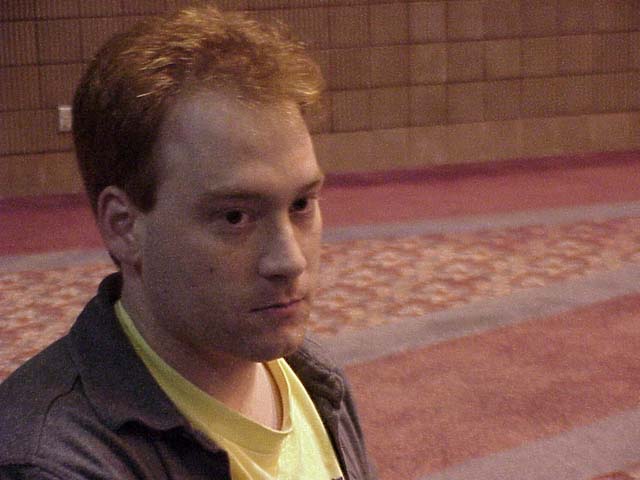 The Pro Tour spawns stars. It was set up in such a way that those players who found success there would be able to further promote the game by letting the world know that fiscal success could be found through one's gaming accomplishments. In this fact, we often forget that while the Pro Tour's finest are obviously strong players, there is a selection of PTQ veterans who have their own accomplishments and storied careers. Eric Kesselman and Bill Stead are two such players.

Hailing from New York and Tampa respectively, these two tournament veterans locked horns after thirteen rounds of swiss in the quarterfinals. After Stead won the die roll, it was Kesselman who was first out of the blocks, first casting a Stormscape Apprentice, then a Nomadic Elf. Upon the completion of Eric's second turn, though, Bill killed the Elf with a Scorching Lava, after which he cast Kavu Aggressor. After Eric then cast his second tapper without a Plains in sight, Bill cast a Hooded Kavu. On Kesselman's fourth turn, the 27 year old lawyer announced 'and you killed the Elf' and proceeded to play a Plains, making his first Apprentice active.

After Stead cast an Ancient Kavu, Kasselman played a fifth land and relinquished the turn. With three more assorted Kavu in his hand, Bill continues attacking and sounded confident, playing another 3/3 beast. It was then that Eric lowered the boom: playing a sixth land, Kesselman played his best card, Treva the Renewer, one of five Dragons opened in the draft, asking if Bill had a Banish in hand. 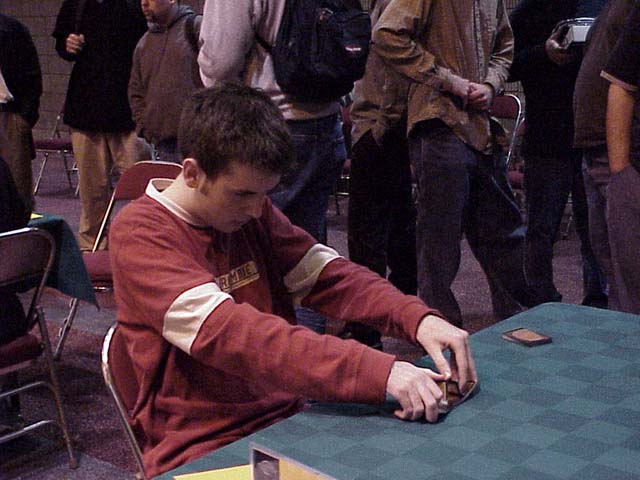 The seventeen year old Stead's previously confident demeanor reverted to one of acceptance. With no solution to the Dragon in hand, he decided with Treva's life gain pending, it was time for an all out assault. Attacking with all four of his Kavus, Bill was able to reduce Eric to five, played a second Aggressor and said 'go', adding 'please, no Tsabo's Decree'. Kesselman had a different trick up is sleeve. Tapping his still lone Plains, the New Yorker cast Armadillo Cloak on the Dragon, moving the score to 13-9 in his favor with an attack, leaving back the Stormscape Apprentice as a chump blocker.

Unfortunately for Kesselman, despite his combo, it was Bill who had the last laugh. After thinking for a few moments, the Floridian cast one of his four Maniacal Rages on Eric's Apprentice, crippling its ability to block. Attacking with all of his creatures, he dealt fourteen points of damage: just enough to take the game. As the two started sideboarding, Kesselman remarked 'I guess I should have blocked with Treva, alluding to the fact that doing so would have eventually saved him six points of damage. Doing him would have won him the game.

With Kesselman electing to play first, he got off to another fast start, playing a second turn Llanowar Knight. With Stead inactive on turn two, Kesselman played a Quirion Elf, naming blue for the Stormscape Apprentice in his hand. After Stead cast a Kavu Aggressor, which died swiftly to an Exotic Curse, he openly prayed to the Magic gods with the cry of 'Come on Tommy'. Stead drew and cast a Hooded Kavu, looking unpleased with the situation as it stood. Kesselman, seeming firmly in control of the game, cast Nomadic Elf and relinquished the turn, choosing not to attack. After a Kavu Aggressor joined the fray, Kesselman drew into his sixth mana, another forest, and attacked for three, after which Stead cast Scorching Lava on the Apprentice, loosening Kesselman's grip on the table. Stead untapped and drew, played his sixth land and cast Maniacal Rage on his Hooded Kavu, attacking for five, as Eric immediately Dismantling Blowed the Rage. Stead then cast Phyrexian Battleflies and Hooded Kavu, giving Eric the turn. 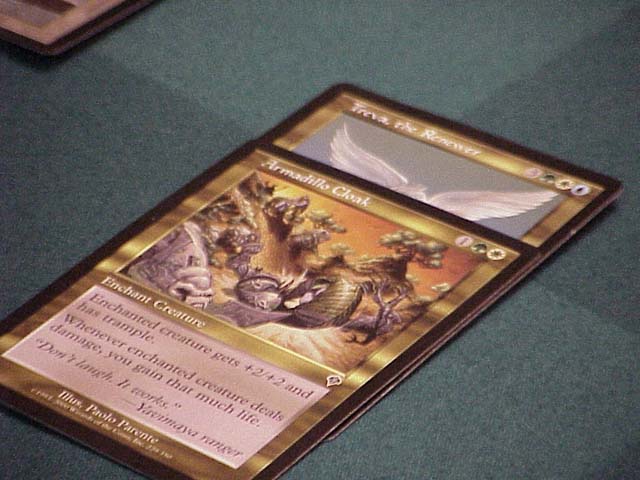 On Kesselman's turn, he drew his second Plains and seventh land, enabling him to cast his Halam Djinn with a little help from the Nomadic Elf. With the Elf, Djinn and Knight attacking, Stead went down to four life. Two turns later, the game was over

Game three started with a fast Stead jump, with Bill playing first turn Battleflies, second turn Maniacal Rage. Kesselman played first a Plains, then a Mountain, visibly slumping in his chair when he was forced to discard due to lack of land on turn three. Stead's Battleflies did thirteen points of damage before another spell was cast in the game, and unfortunately for Kesselman, it was a Kavu Aggressor for the Floridian. A turn later, the two creatures attacked for seven points, ending the game, and the match.

Bill Stead will now go on to play the winner of the Casey McCarrel/Steve O'Mahoney-Schwartz match. Keep checking the Sideboard to see how he fares against whichever titan emerges.