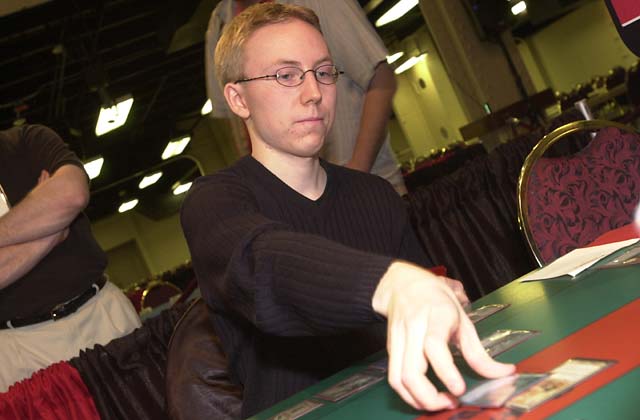 Austria's Benedikt Klauser rolled into the Pro Tour LA semi-finals by pushing past Finland's Erno Ekebom in the longest of the quarter-final matches, 3 games to 1. Despite two mulligans, Klauser consistently developed better and faster than Ekebom, leading a mostly one-sided match.

Game 1 set the tone when Ekebom stalled at four lands and a Metathran Zombie. Klauser started with a quick Nomadic Elf and Armadillo-Cloaked Llanowar Knight while holding handful of fat, having started with or drawing by turn 4 Ruham Djinn, two Glimmering Angels, and Rith, the Awakener. Ekebom held enough bounce and stall, but couldn't capitalize on the tempo gain. Klauser tapped out to play the first Angel, so Ekebom seized the opportunity to play the Mourning while the Austrian couldn't use the Angel's ability to become untargetable. After absorbing a few attacks, Ekebom used Repulse on the Llanowar Knight, which had the important effect of sending the Armadillo Cloak and all its life gain to the graveyard. He used the Recoil on the Rith, but had no answer when Klauser played it a second time. When Klauser played Wane on the Mourning, Ekebom scooped.

Klauser thought long and hard about his sideboard choices in Game 2. He pulled two Islands, a Spite/Malice and Repulse, stared at them for a while, then took only one Island, replacing the Ruham Djinn. He later confessed that the Djinn was "just a little too slow" for how he wanted to come at his opponent. Ekebom chose to not pull anything from his sideboard. Klauser mulliganed a zero-land hand, then kept one with two land and all low-cost creatures and spells. Importantly, one of the spells was Harrow, an effective aid to his mana development.

Ekebom's first creature was again a Metathran Zombie, to which Klauser responded with Might Weaver. Ekebom came back with his first Shoreline Raider, a creature he desperately needed to hold back the pressure from Klauser's Serpentine Kavu and Kavu Climber. On the following turn, Klauser thought long and hard about whether or not to Cloak up his Might Weaver. He attacked, honestly representing an Explosive Growth. Ekebom didn't even consider taking the bait. In his Second Main Phase, Klauser took advantage of the fact that Ekebom was tapped out by playing Harrow. He got an Island and a Mountain to compliment his Forest and Plains. A turn later he played an uncontested Serpentine Kavu. Nothing seemed to go his way after that.

The two traded a few attacks, but when Ekebom summoned his second Shoreline Raider, his plan started falling into place. Stalling Klauser's two beefy Kavu on the board and bouncing the rest of what the young Austrian played, Ekebom pecked away at his life total. Klauser looked to equalize when he played for the second time a kicked Benalish Lancer and then on the ensuing turn played on it an Armadillo Cloak. Unfortunately for him, Ekebom targeted the Lancer with Agonizing Demise. The response was a scoop. 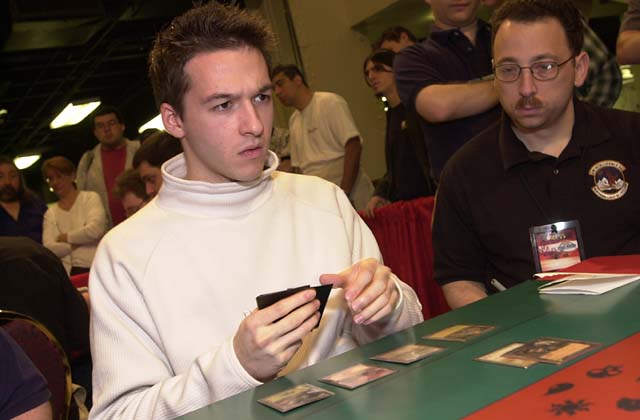 Game 3 was an interesting affair that saw multiple momentum shifts. When it came to sideboarding, Klauser thought long about returning the Djinn to the mix, but eventually decided not to. He bluffed a mulligan, long considering his excellent starting hand, which included two Angels, a Thornscape Apprentice, an Explosive Growth and a Might Weaver. Ekebom played a Duskwalker without kicker, but lost it when he tried to trade for the attacking Apprentice. Klauser used the non-Kicked Growth, and was off to the races.

Ekebom once again played an early Shoreline Raider, but lost it to an excellent play Klauser. The Austrian student with the Might Weaver, but had only green and white mana available, so Ekebom didn't fear the Apprentice's ability to give a creature First Strike. His lack of fear was misplaced. After the declaration of the Raider as a blocker, though, Klauser played Harrow, fished out a Mountain, and used that very ability. A turn later, he pressed his advantage by playing an Angel. At the end of that turn, Ekebom played Fact or Fiction, drawing up 2 Swamps, an Island, a Wash Out and a Probe. Klauser put the Probe by itself in a pile; Ekebom quickly dumped it in the graveyard, taking the four cards.

On his own turn, the Finnish Social Sciences major played Darigaaz's Attendant. It gave him a slight ground advantage, but he still was having trouble in the air. Klauser seized back the advantage by bringing out another Angel. The pendulum swung once again when Ekebom put Mourning on the Weaver and played a Shoreline Raider. It was obvious that he was saving the Wash Out for the white fliers that were beating him down. He absorbed a double-Angel attack bringing him to 9, then did indeed play the Wash Out. Klauser drew the Benalish Lancer, but played an Angel. At end of turn, Ekebom played Recoil on Klauser's lone Island; Klauser discarded his relatively useless Serpentine Kavu.

On his own turn, Ekebom returned the Mourning to his hand and put it on the Angel, stalling the air game. Klauser attacked with his Weaver and Nomadic Elf. Ekebom was compelled to block the Elf with the Raider. When Klauser gave the Elf First Strike, Ekebom Recoiled the Elf, but the Austrian had enough land in his hand to have something useless to discard. He replayed the second Angel, and things were looking bad for the Finn.

On his turn, Ekebom thought for a long time. His Attendant attack was uncontested, dealing his first damage of the game to Klauser. He then played a Swamp and Yawgmoth's Agenda. With a graveyard full of goodies (two Recoils, Wash Out, Probe, Fact or Fiction, Duskwalker, and Shoreline Raider), it seemed as though he might be able to equalize the match. It was not to be. The combination of the Apprentice's tapping ability and the Nomadic Elf's mana-washing ability were too much. The Apprentice allowed attacks to go through; the Elf kept the Angel untargetable, when Ekebom tried to play Agonizing Demise on it during Klauser's upkeep. When Klauser said "Wash," Ekebom said "scoop." 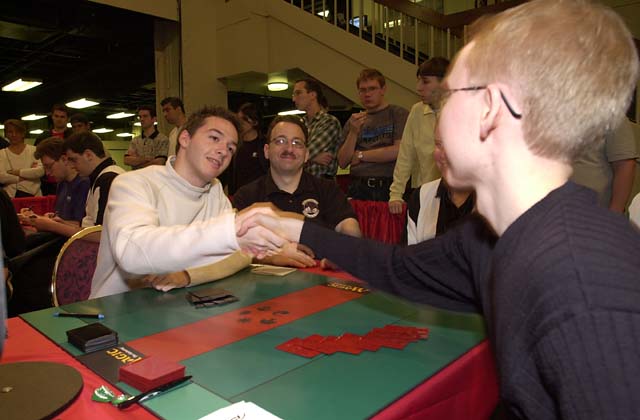 Game 4, even with a Klauser mulligan, was never close. After having finally decided his Serpentine Kavu was useless against the multiple Shoreline Raiders, he sided it out and brought back in the Ruham Djinn. The Djinn showed up in his initial hand, but was the only non-land - none of which were white. His next draw was far better: 2 land, Angel, Acolyte, Cloak and Lightning Dark. On turn 3, he Cloaked the Acolyte; on turn 4 the Angel showed up. Turn 5 another Angel and the Apprentice showed up. This could have made him vulnerable to Wash Out, but Klauser obviously smelled blood. Two turns and a Might Weaver later, the life totals stood 32-2. Ekebom in desperation played Probe, hoping to find an answer. Recoil was all he could muster, playing it on the Armadillo Cloak when facing down an all-out attack. It didn't matter. Klauser saw that the Weaver could give an Angel Trample, dealing the killing blow.

In the end, it was Klauser's early advantage in each game that was the difference. Many draft spectators agreed that if Ekebom had gotten by Klauser, he was the favorite to win the event. Unfortunately, his first matchup was his worst, and it cost him a shot at the title.