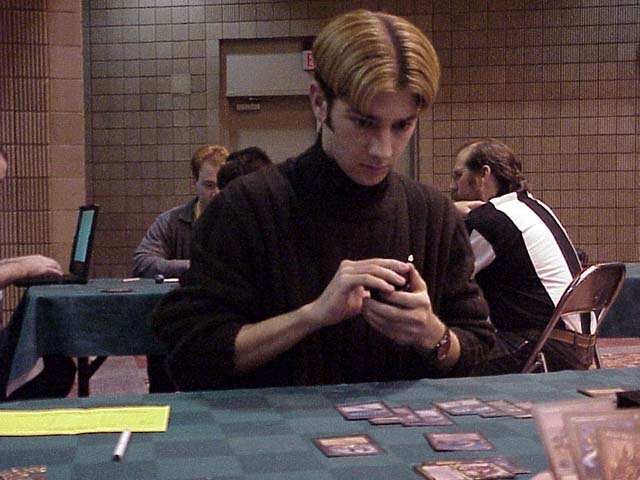 Jamie and Michelle, both veterans of the Pro Tour, both came into the final draft with a strong preference for colors and strategy. Parke's strategy was to draft the Black/Blue tempo control deck so popular amongst the young kids today, while Michelle's was to follow the advice of her boyfriend Darwin Kastle: "Draft Red, Black, and Blue, unless you open Darigaaz, in which case it's ok to draft a little Green."

After spending all day yesterday drafting and playing exclusively come combination of Red, Black and Blue, she was thrown through a little loop when she opened the Dragon with the Blood Oath-like ability. Her draft was also made a little shaky by Bill Stead, who was passing to her - when he went Red/Black, it hurt Michelle's chances at an amazing deck. Her deck turned out ok, nonetheless, but it's possible that her deck could have been hurt by her allegiance to the colors she chose.

After about seven minutes of shuffling the players drew their hands and began. Michelle's opening hand was 5 land, Soul Burn, and Darigaaz, the Igniter. She must have smiled a bit inwardly knowing a 6th turn Darigaaz was likely. Jamie played a second turn Vodalian Zombie which applied the beats for a few turns, until finally Michelle Soul Burned it. Jamie made an excellent play, tapping out to play Phyrexian Delver, bringing back the Vodalian Zombie. The only problem with this is it didn't let him fake the Exclude, and so Michelle dropped her Dragon with confidence. On Parke's turn, he thought for a long time about his play, and then used Deliver to return the dragon to Michelle's hand. The problem with this thinking time is that again, it didn't show confidence in an Exclude, and so when Michelle went again, she dropped Darigaaz without hesitation.

Parke had gotten some damage in, but Darigaaz was going to quickly eat him for breakfast if he didn't do anything about it. He played a Phyrexian Reaver and then Exotic Cursed the Elder Dragon, hoping to slow down his own demise. Michelle drew and played an Ancient Kavu, as well as swinging with Big Daddy Darigaaz. Parke swung with his Reaver, trading it with the Ancient Kavu. He then Recovered it, and played it again. Bush likewise Recovered her Kavu and played him again. Her draw that turn brought her Cauldron Dance, though. After trading the Kavu for the Reaver (again), Bush Cauldron Danced the Firescreamer she held in her hand, as well as Dancing the Kavu, and swung with everything. On her next turn, a Mourning Darigaaz (now a 2/4) made it in for the kill. 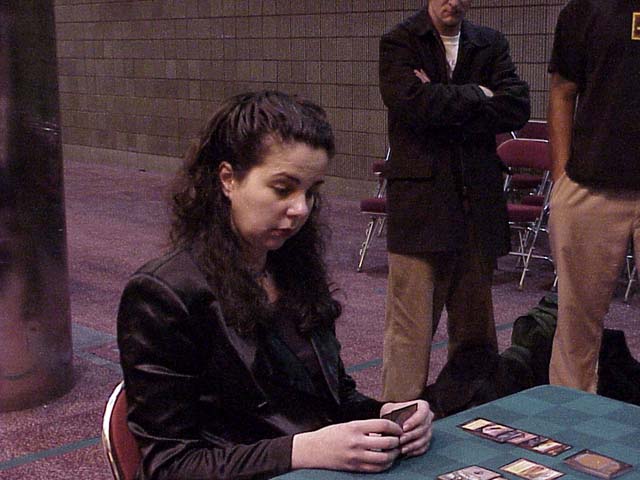 Michelle's opening hand was nothing she wanted to play with, so she threw it back into her deck and shuffled up a second hand. This one was much better (as it included land AND spells) and her first few draw phases saw her draw into some high octane cards. Over forty permanents graced the board this game (including land) so details may be a bit sketchy. Parke's hand was slow, and he could only Exotic Curse a Cinder Shade before finally having to discard a Phyrexian Reaver to a Ravenous Rats. On the next turn, Jamie brought his Reaver back to life with Phyrexian Delver, but with the early damage he had taken from a Battleflies and a Pouncing Kavu, the life loss from the Delver took him to seven life. Michelle Annihilated a Faerie Squadron, but the forces kept building up, with a Urborg Emissary, Vodalian Zombie, and Slinking Serpent all joined the forces on Parke's side of the table, and Michelle recruited an Alloy Golem, a Firescreamer, and a Shivan Zombie. All of these forces stared each other down, as Michelle's life got slowly lowered by the Slinking Serpent that was walking right over her Darigaaz casting Forest. If Michelle had drawn Darigaaz, it would have been useful, instead the green mana was just a liability at this point. Michelle played a key card - a Nightscape Apprentice, which didn't seem like much of a threat, which it wasn't by itself. But the Apprentice was a great assistant to her other cards, offering them the special ability of First Strike. The Apprentice scared Parke. He knew that if he didn't take care of the Apprentice, it would take care of him. So, while at five life, he played a Plague Spitter. Michelle, smelling blood in the water, came in for the kill, casting Tribal Flames on Jamie, and then after the Plague Spitter did its duty, she Zapped him for the win, the match, and the chance to play in the semi-finals.