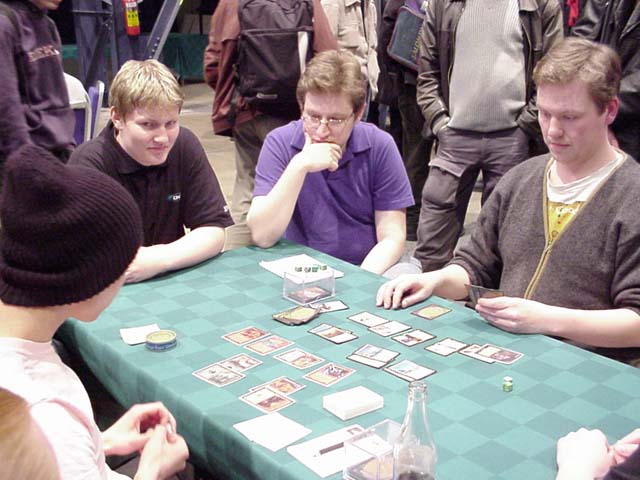 Although Öman is not well-known outside of Sweden, he has proven to be one of the top Swedish players by winning the National championship twice. He also played in several Pro Tours. Thrane has been playing the game for many years now, but it is his first major tournament success. Thrane's other claim to fame was introducing and mentoring the top Denmark player Svend Geertsen to playing Limited Magic.

Thrane's deck is a little strange. Its base is a fairly standard U/W/b strategy, with solid ground blockers, a lot of flying 2/2 creatures and a splash of black removal. However, Thrane managed to add a fourth color to his deck - he is using a pair of Elfhame Palaces to play an Armadillo Cloak.

Öman drafted an aggressive red-black deck. His card quality is far from high as he was sandwiched between several other red-black drafters, but the deck is aggressive and has a shot to win, especially if an opponent stalls on mana even a little.

Öman began the game by casting his creatures on a Sligh-like mana curve. Thunderscape Apprentice, Shivan Zombie and Slingshot Goblin came out one after another. Thrane did not have any creature to play early at all, but he did cast a Lashknife Barrier before finally casting his first monster - a Razorfoot Griffin - on turn four.

The Swedish player could not immediately remove the Griffin. He enchanted it with Cursed Flesh, allowing the Slingshot Goblin to come through for two points of damage. Shivan Zombie was able to attack anyway, as it had protection from white. 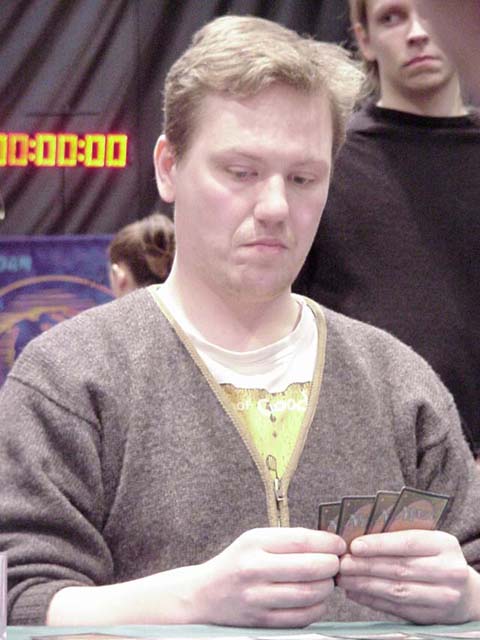 At this point Öman mana-stalled at four, unable to summon a Duskwalker for several turns. Thrane began to recover slowly, casting a Glimmering Angel and a Meddling Mage. Since he did not know the contents of Öman's deck, Thrane named the common card he feared the most at the moment - Magma Burst.

All the creatures that Thrane was summoning were white, and unable to block Shivan Zombie. Thus, Öman was able to deal three points of damage every turn by attacking with his Zombie and activating a Thunderscape Apprentice to 'drain life' his opponent for one. Down to six life, Thrane would have lost the game on the following turn to Öman's Tribal Flames - had he not drawn a source of black mana he badly needed. Now with seven mana in play, Thrane was able to cast a Stormscape Battlemage with double kicker, taking out the annoying Apprentice and gaining three life to get out of burn-out range. On top of everything else, Battlemage with Lashknife Barrier in play could hold off Shivan Zombie, too.

Öman never recovered from this play. The Barrier completely wrecked his game plan - it allowed Thrane to have several blue 2/2 creatures in play, and decreased the usefulness of Tribal Flames. Thrane was able to take the game by attacking several more times in the air.

In the second game Öman drew a hand of several lands, a Mire Kavu, Singe, and Keldon Mantle. The hand was much too slow for his deck, but he chose to keep it anyway.

Thrane on the other hand, had a pretty good draw. He cast a turn two Meddling Mage, naming Slingshot Goblin. He followed it up with a Tower Drake (which got immediately removed with Singe), and a Razorfoot Griffin. 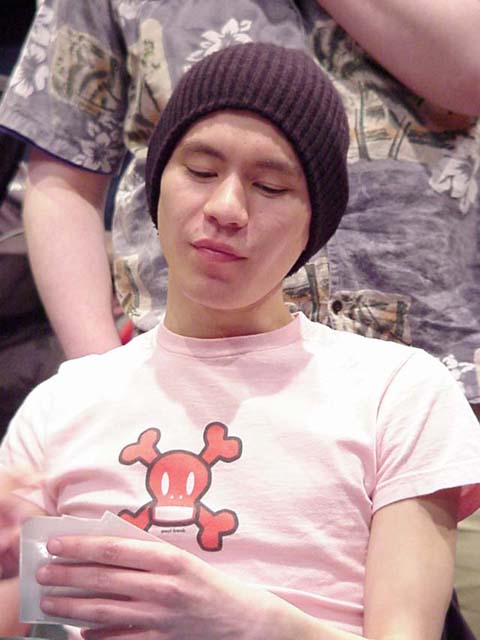 Unlike the first game, Thrane was able to keep the initiative, and remain on the offensive. It looked scary for just a moment when Öman enchanted his Mire Kavu with Sinister Strength and attacked for seven - but Thrane peeled a Shackles off the top of his library, dealing with that threat.

Thrane used a Dream Thrush to cast his Armadillo Cloak on the Meddling Mage, and attacked several times before Öman finally got a pair of 3/3 creatures into play able to block it (Duskwalker and Phyrexian Reaper). A Pollen Remedy saved the Mage while taking out one of the 3/3 guys, and leaving Öman even further behind. By the time Öman drew a way to deal with Meddling Mage (Scorching Lava along with a 3/3 blocker) he was left at one life and facing down a pair of other creatures. The National champion was not to become a Grand Prix winner this time around.

Final Result: Game and match to Jesper Thrane, who went on to play against Raphael Levy in a top 4 match.