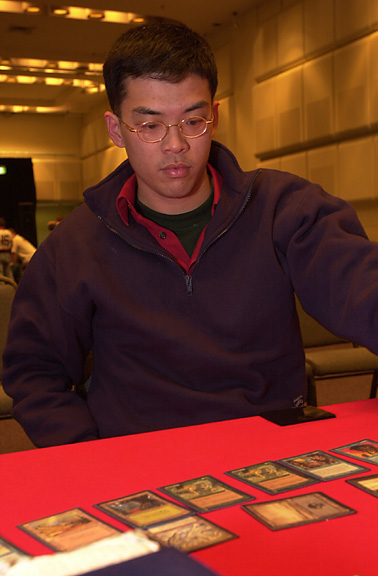 Coming into the game, Connolly had confessed that he didn't have much chance to win this matchup and that he'd need lots of luck to progress to the semis. But as the games progressed it would appear that Sister Luck was on his side.

When Connolly lost the die roll, he felt as though he had no chance in the match up, but had he seen Chai's opening hand, he might have picked up his spirits. Chai started with 4 land, 2 Consults and a Vampiric Tutor, which had the potential to either make his draw lightning fast or cost him the match via lost Consult cards. Not knowing whether he should mulligan or keep it Chai rolled his dice, and it told him to keep his hand. His first turn Consult for a Mox Diamond removed all 4 Necropotence from his deck, much to the delight of the cheering Connolly. With nothing else happening until turn 4, when Connolly end of turn Fact or Fictioned, Connolly gained an Island, Forest, Island, Gush while only losing a Horn of Greed. After hard casting the Gush and being Duressed a turn later, Connolly revealed the hand Force of Will, Fact or Fiction, Gaea's Blessing x2, Forest, Mountain, Gush and Chai removed the Fact or Fiction as he believed he could safely force through his Illusions the turn later. During Connolly's next turn, he cast two Explorations, floated UG Gushed and cast Gaea's Blessing twice, desperately looking for some more counters for what was coming. When Chai did indeed Force through the Illusions, Connolly had one last chance before he died, attacking the Donate that was coming next turn. With only one card left in his hand, Chai ended his turn, Connolly drew and hard cast a Crater Hellion in what seemed to be a last ditch joke. However the joke was on Chai, as Connolly had top decked a counter and stopped the Donate.

Siding in his Negators and leaving only one piece of each part of the Donate combo in his deck, Chai started off game two the same way he started game one, rolling to see if he should keep his opening hand. This time the dice told him to mulligan and when he inspected the top four cards he breathed a sigh of relief. Connolly was the next to mulligan and as a joke took all of Chai's dice and rolled them before shuffling his hand back into his deck, with the crowd bursting out in laughter. With both players happy with their new hands the game got underway, and the going was slow until Chai forced down a forth turn Necropotence that he had Vampiric tutored for, Duressing away a Force of Will before casting it. After a long amount of though Chai Necroed for 8 cards. Connolly untapped and dropped a Spike Feeder that he had drawn off the top of his deck, pointing at the deck with the Feeder as he cast it and smiled. Unfortunately for Chai, the Spike Feeder was in fact a monster, as his Necro had yielded nothing but Misdirections and land, so he was forced to Necro for another six cards, looking for a threat to cast next turn. After taking another two from the Feeder, he cast a Masticore, but Connolly had drawn another amazing card off the top of his deck: Force of Will. During this match, Connolly had luck that would make even the most professional of gamblers wince. Forced to pitch a card to a Misdirection, Chai was in major trouble as the Spike Feeder would be able to gain some life for Connolly leaving Chai unable to finish him off before he would run out of cards in hand upkeeping the Masticore. Trapped at 1 life and locked under his own Necro, Chai conceded the game and the match to a relieved Connolly.