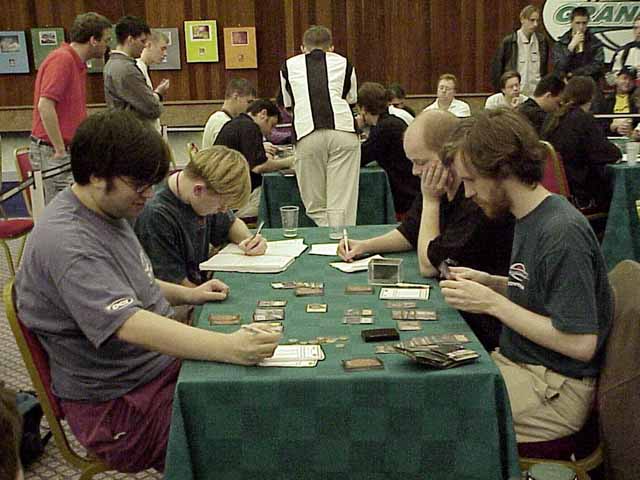 Both players had managed to draft their favourite colors in the draft, with John playing a Blue/Black deck, with a little white for only one or two spells, and to pay the activation on his Stormscape Apprentice. Zvi has another White/Blue deck, which he has tried to draft every time so far today.

John's start in game one was slow, after he was forced to mulligan his one land opening hand, allowing Zvi to play a Galina's Knight, a 3/3 Faerie Squadron, and a 2/3 Ardent Militia. John could only manage a Trench Wurm, although by enchanting it with a Sleeper's Robe, he tried to find an answer to Mowshowitz's creatures, particularly the flyer. John only got to attack once with it, as Zvi's next attack brought him down to nine, and Zvi summoned a Crosis's Attendant. This meant that John had to hold back with the Wurm, to use it as a deterrent. John recoiled the Faerie Squadron during the American's next attack, but Zvi simply replayed it on his next turn, and brings John down to six. John couldn't find an answer fast enough without the card-drawing power of Sleeper's Robe, and was once again forced to hold back with the Trench Wurm. Zvi added up the power of his creatures in play, and realised that if he simply attacked with all his creatures, that would be the end of the first game

John starts game 2 with a Stormscape Apprentice, Zvi answers with a Tidal Visionary, which immediately trades with John's Apprentice. Zvi played a Stormscape Apprentice of his own, but his draw was slow, with two Benalish Lancer, and a Vodalian Serpent, none of which he would hoping to cast for less than six mana. This allowed John to play a pair of Vodalian Zombies, getting Zvi down to ten before he could cast a Vodalian Serpent. John had an answer for this, though, with an Agonizing Demise allowing him to reduce Zvi to five. Zvi stabilized temporarily with a Wayfaring Giant, and a Sky Weaver. However, the stalemate didn't last long, when John drew a Traveler's Cloak, stopping Zvi from blocking one of the Zombies.

Zvi opted to go first in the third game, dropping a quick Galina's Knight, and a Benalish Lancer on his second and his third turns. John didn't have such a quick start, but once again he had a Sleeper's Robe, using it on his Vodalian Zombie. While John attacked Zvi three times and gained card advantage, Zvi continued to play creatures, this time laying a Razorfoot Griffin. John laid a Phyrexian Slayer and traded it for the knight. Zvi then made a Sky Weaver to take to the skies. Then John dropped the bomb, down comes Dromar the Banisher! Zvi made another lancer, leaving only the griffin to block. But John recoiled the griffin and in came the dragon. Its ability returned all white creatures meaning the dragon went home but so did Zvi's army. When the dragon came back Zvi could do nothing except scoop.