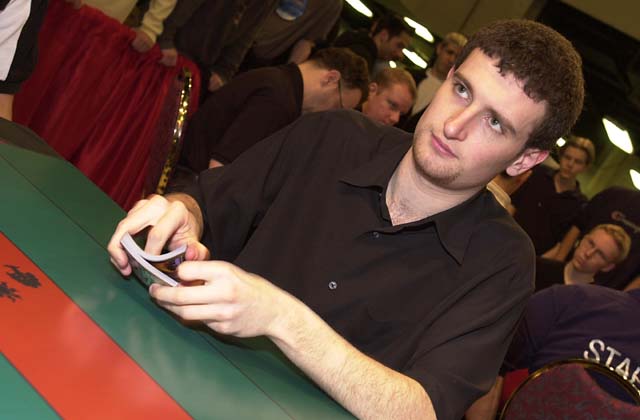 The two competitors drafted very similar decks. Both have a selection of extremely fast creatures and cheap removal spells.

Gurney managed to defeat Finkel the day before, almost keeping him from making this Top 8. He was looking like he could quite possibly win again. Superior creatures and slightly better removal meant that Gurney had a slight advantage in the matchup. On the other hand, he did face the one opponent recognized as the best player in the game, so Gurney would need to play flawlessly as well or lose his advantage.

Gurney was forced to mulligan his opening hand. Finkel had two Swamps as his only land, but found this to be sufficient.

Gurney's six card hand was much better. He played out a number of creatures and began attacking. Finkel did mana stall for a turn, after laying his two Swamps, but drew a Mountain after that and was able to remove the attacking creatures.

Now it was Gurney's turn to sweat. He was somewhat mana-flooded, and was hard pressed to deal with the creatures Finkel was summoning. The positions reversed completely over the next few turns - it was Finkel was who able to reduce his opponent's life total to the single digits.

At this point however, Finkel too began drawing more and more land. Both players had four-card hands at all times, however most cards in their hands were land. The game ended up in a very intense top-deck mode, with advantage swinging at every other draw.

Down to six life each, Gurney finally drew a card that could end this game. He cast Recover, getting back his Cinder Shade - a creature that would be very difficult for Finkel to remove. Indeed, Finkel did not draw an answer, nor a blocker to try and buy another turn with, and Gurney was able to win the game by pumping the Shade to become 6/6.

Gurney was forced to take another mulligan in the second game. He kept a one-land hand on the strength of a number of two casting cost cards in his hand, and the fact that he was playing second. 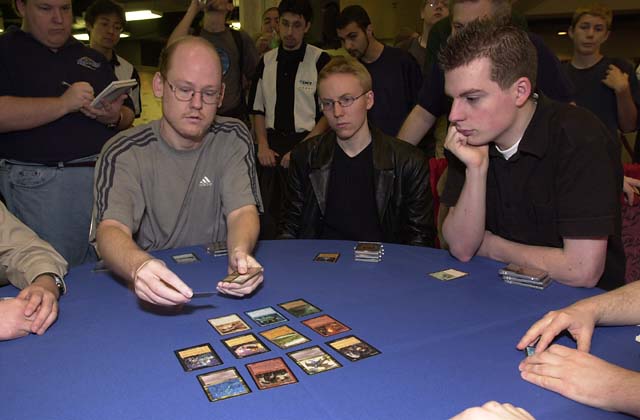 Gurney missed a single land drop, but managed to recover fairly well otherwise, drawing several more lands in a row after that.

Finkel opened with Hate Weaver, following it with several other creatures. He used Zap to remove Gurney's first potential blocker, then traded some creatures in combat, always summoning more and remaining on the offensive.

Once Finkel got up to six mana he was able to use Plague Spores to remove another blocker and further punish Gurney's already shaky mana situation by destroying his only Swamp. Ravenous Rat and Vicious Kavu came out next. Best Gurney could do at this point was to cast a Kavu Aggressor, holding a handful of black cards. Finkel was able to end the game in just a couple more turns.

Finally, a game where both players drew their mana. This one was all about Firescreamers. A few creatures traded in combat early on, neither player drawing a lot of removal in their opening hand this time. Multiple Firescreamers were cast on both sides of the table. Gurney went on to cast Recover - one of the more powerful cards in this matchup - to re-cast one of his Firescreamers, too.

Although Gurney played generally well, there were several situations throughout the match, and particularly in this game, where he could have possibly made better plays. The one clear mistake he made was neglecting to play one of the several Swamps in his hand, with two sources of black mana in play, a Phyrexian Battleflies that had to block a 2/2 creature, and a Mourning on that particular creature (a Vicious Kavu). 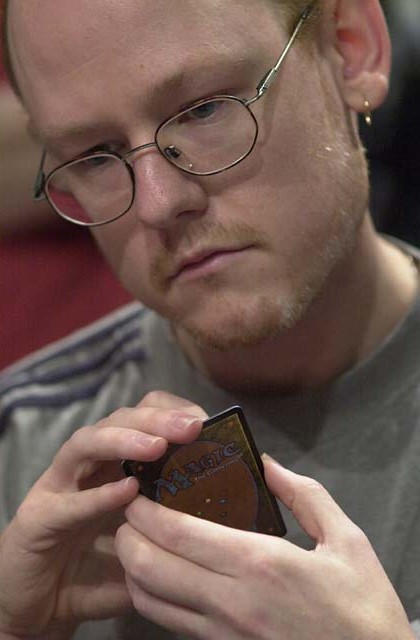 Having lost the Mourning, Gurney was now in a really bad shape. Although he got Finkel down to three life points early on, he was now on the defensive. He drew a Cinder Shade, and was able to survive the following turn despite facing two creatures at one life point. If he had Mourning, he would have been able to stalemate the game at least for that one turn, prolonging the game and giving him more opportunities at finding some way to win the game. However, Finkel played yet another small creature, and Gurney went down.

It is Finkel's turn to mulligan this time around, but Gurney's mana situation wasn't too great either. Gurney started off pretty well, with a second turn Skittish Kavu and a third turn Ruby Leech. Unfortunately for Gurney, he was stuck at three mana and only one of those lands produced red. He was holding a number of excellent cards - Hooded Kavu, Zap, Tribal Flames, and a less excellent Firescreamer - but was unable to cast any of them.

Finkel took quite a bit of damage from Ruby Leech, but he now cast some creatures of his own and was able to race it. Smoldering Tar was dealing a point every turn as well, until Finkel finally used it to kill Firescreamer, once his opponent drew the fourth land. 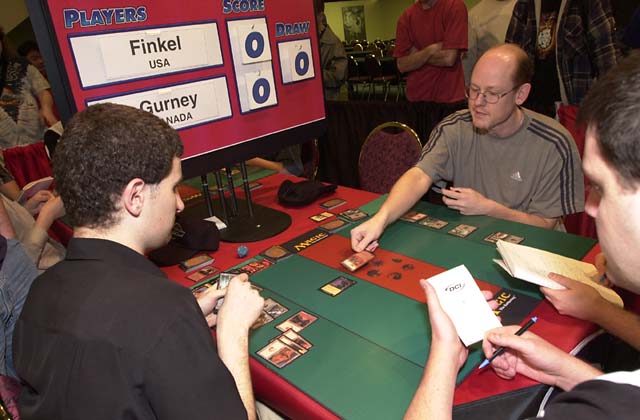 Gurney was finally able to suicide his Ruby Leech by running it into a Phyrexian Reaper Finkel just summoned. He could have combined the first strike ability of the Leech with Zap to take out the Reaper and keep his creature, but he really needed to get out of the whole he dug for himself.

With his mana freed up, Gurney was now able to cast his removal spells and take out most of the creatures Finkel had in play. Most, but not all. Finkel's creatures continued to break through, until he was able to finally reduce Gurney's life total down to two. He then top-decked an Urza's Rage and was able to finish Gurney off a turn sooner than his 1/1 creatures could otherwise.