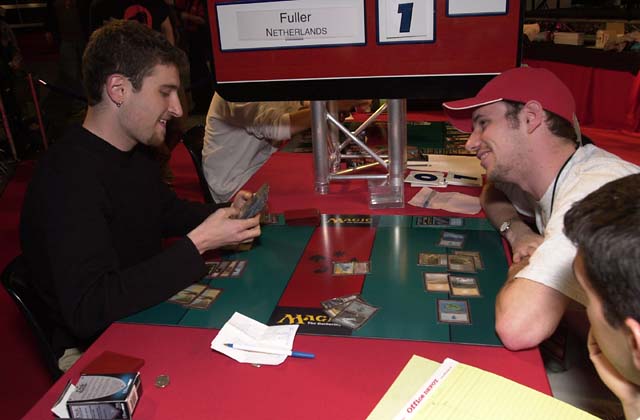 Ryan Fuller was joking around before the match about how this match was being billed as "good versus evil." "Every match I play is 'good versus evil' - what's up with that?" Zvi Mowshowitz leaned over from an adjacent matched and delivered his best one-liner since Nationals 99: "No, sometimes you play teammates!" This matchup could equally well be categorized as "the best player in the world versus the hottest player in the world." Finkel is threatening to top a quarter of a million dollars in career earnings this weekend, but it is Fuller who is the #1 ranked composite player in the world. His last three tournaments have been two Grand Prix wins (Prague (which was draft) and Moscow) and a Top 8 at Pro Tour-Tokyo where he set the all time record by going 14-0 in the Swiss. These two squared of for big stakes once before, when Finkel beat Fuller in the tiebreaker game of the World Team Championship in Brussels last summer. Finkel (and team USA) won that time.

Both players decided to run blue-black-white control decks (nicknamed "Go-Mar," short for Dromar-go) in for the Barcelona Masters Series event and both players won their first two rounds.

Fuller paused during his second turn and then played Meddling Mage naming "Exclude." The big change Fuller made to his Go-Mar deck after using it to win Grand Prix Moscow was to take out his main deck Galina's Knights in favor of main deck Meddling Mages. He felt the pro-red Knights were appropriate for the GP, but for the Masters he expected to see more control decks where "Pikula" would be a lot better. On his third turn, Fuller played a second Meddling Mage and named Rout. However, Finkel dispatched it with the -2/-2 ability of Dromar's Charm. Nothing else happened for a few turns until Finkel played Recoil targeting the one remaining Mage. Fuller let that happen and discarded a Rout.

The real game in a control on control matchup is about mana. Typically, both players accumulate so many permission spells in their hand that they can't play them all in one turn because they run out of mana. Whoever stops playing land first is forced to decide whether to discard cards (because they have more than seven) or to cast spells. Whoever taps mana first is at a huge disadvantage in the permission war that is sure to follow so the general wisdom is that whoever stops playing land first will lose. Fuller had to make this tough decision first, but it wasn't that tough because discarding Teferi's Moat wasn't exactly a hardship in this matchup. Fuller then drew consecutive lands and Finkel was forced to discard an Exclude and then a Rout.

When Fuller drew yet another land (giving him 12 to Finkel's 10), Finkel felt he had to make a move and played Fact or Fiction during Fuller's end step. Fuller still didn't want to tap out (or perhaps he was planning to deck Finkel) and he knew Finkel had an almost hand full or cards so Fuller simply let the spell resolve. He divided the five cards into Dromar's Charm, Yawgmoth's Agenda or land times three. Finkel took the land. He then played a main phase Lobotomy, which Fuller Absorbed, and discarded a Plains.

During Finkel's next end step Fuller made his move with a Fact or Fiction of his own. Four Absorbs and a Dromar's Charm later, Finkel won the first real permission skirmish, gained 9 life, and Fuller got to untap with only three lands untapped on Finkel's side of the table. Down came Meddling Mage. "Sure." Fuller picked up Finkel's graveyard and eventually settled on "Rout." Fuller then played Galina's Knight, which resolved, and Dromar, which did not. 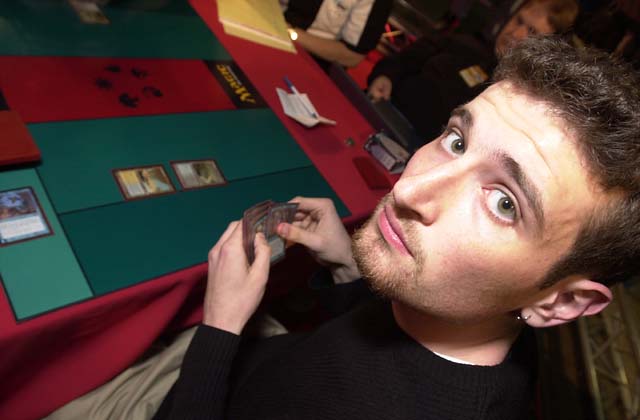 Suddenly Fuller was a beatdown deck, with a pair of grizzly bears in play and no cards in his hand. He top-decked Opt and used it to find Dromar! With Meddling Mage set to "Rout," Finkel was in trouble. Finkel played Galina's Knight and, of course, Fuller left the Mage at home when he attacked. Finkel traded off the Knights and Fuller promptly played his next top-decked bomb: Fact or Fiction. He took Absorb (not three and plus Fact or Fiction). Finkel drew a card and scooped.

The crowd applauded and Fuller crowed about top-decking that Dromar while Finkel complained about playing those two copies of Fact or Fiction without finding a single card that did anything. Dave Williams chipped in from the crowd in awe of Fuller's recent run: "He wins every tournament now - it's the new Finkel versus the old Finkel."

Fuller played a turn 2 Meddling Mage again in game 2. This time he named "Galina's Knight." Nothing else happened until Finkel tapped out during Fuller's end step for Fact or Fiction. "No fear, eh?" asked Fuller. "If you've got it, show it" answered Finkel. Fuller didn't have the Disrupt that would have destroyed Jon and muttered "I hate it when people play ballsy like that," and then let the spell resolve. (Interestingly, Fuller had both Gainsay and Dromar's Charm in his hand, but chose not to use either.) The top five cards were all spells and Finkel wished Fuller luck in splitting them up. Finkel leaned forward aggressively as Fuller started splitting. Fuller eventually settled on Charm, Lobotomy or Rout, Recoil, Agenda. Finkel took the Lobotomy and the Charm, which he soon used to remove the Meddling Mage that had knocked him down to 12.

Finkel played a second Fact or Fiction two turns later and Fuller let that one resolve as well. He wound up with Absorb and land, passing on Opt plus two land. During his next main phase, Finkel tapped four of his 8 lands to play Lobotomy. Now Fuller knew it was time to fight. Fuller only had 6 untapped lands to fight with since Fink had gone first and Fuller had played a Salt Marsh on his most recent turn. That was enough for two counters. Finkel Gainsayed the first one, leaving himself just enough mana for a second Gainsay and thus Finkel's Lobotomy resolved. Fuller had Dromar and his Charm left in hand. Finkel took away all the dragons and then commented "wow, you do have Disrupts in against me" as he studied Fuller's decklist. Disrupt would have destroyed him again that turn if Fuller had had one in hand.

This time around Fuller failed to top-deck anything on the one turn Finkel gave him. Finkel played two more Lobotomies over the course of the next half dozen turns and Fuller was forced to use the lone counter he had accumulated on each of them. Finkel had Absorb the whole time and was just waiting to draw an offensive threat. Two counters a piece later, Finkel got a Fact or Fiction to resolve and took Galina's Knight, Dromar and land over Gainsay plus Dromar's Charm. Fuller's creatures or counters split seemed pretty intelligent, especially since he had a Repulse ready for the dragon. He looked even smarter when he found Yawgmoth's Agenda. He thought Finkel was out of counter-magic, but Finkel wasn't. One Dromar's Charm later all Fuller could do was say "You da man" and "here comes Dromar." Fuller did immediately draw Fact or Fiction and wound up with Gainsay and Opt (not charm plus two land). The Opt revealed a Lobotomy, which Fuller took and used to deprive Finkel of all his Galina's Knights. "I guess Dromar's gotta go the distance," commented Finkel. Fuller studied what was left of Finkel's deck and commented that there just wasn't much left. Finkel agreed, stating that all he had left was four turns of Dromar. It turned out to take five because Fuller got to Absorb one spell, but dragon beatdown was enough to even the match at one game apiece.

Fuller took a long time sideboarding for the last game. He decided to leave in his Disrupts even though Finkel knew about them now. He also decided to leave two Benalish Heralds in his sideboard. After twenty minutes of sideboarding and shuffling Fuller uttered one final "god, I can't believe you had that last counterspell" (he truly expecting his Agenda to resolve) and they were on to game 3.

The first spell of game 3 was Finkel Recoiling a Coastal Tower during Fuller's 6th end step. Fuller responded with Fact or Fiction and took Dromar's Charm, Rout, and Repulse rather than two dragons. He then let Recoil resolve (discarding a plains) and passed the turn to Finkel with just two lands untapped. That left Fuller with 8 cards in his hand and he was forced to also discard Repulse. Finkel went for Lobotomy on his next main phase and Fuller did not have Gainsay. What he did have was two Dromar's Charms, Yawgmoth's Agenda, Rout, Absorb, and two land. Fuller pointed to one of the Charms and complained "I almost discarded that," but Finkel saw through his ploy. Since none of the land Fuller had in play or in his hand could produce black mana, Finkel took the Absorb and not the two charms (or the Agenda).

Fuller top-decked and played Meddling Mage (naming "Dromar, the Banisher"). Finkel Lobotomied again and this time he did take the two Charms. Finkel's next move was Fact or Fiction, but Fuller had just drawn the Gainsay he needed to stop the bleeding. The bleeding started up again soon enough as Finkel had another Fact or Fiction ready for Fuller's next end step. It netted him Dromar plus two lands when he declined Absorb plus Dromar's Charm. And end step Rout cleared Meddling mage out of the way and then it was dragon time. Fuller tried for a Rout of his own but Finkel just let it resolve and played a second dragon. Fuller's next play was Lobotomy, which Finkel just let resolve because he didn't want to tap out. He showed Fuller a hand of Dromar's Charm times two, Yawgmoth's Agenda, and Spite/Malice. "That's a good hand," commented Fuller, who studied Finkel's graveyard for a while before deciding to take away the charms. 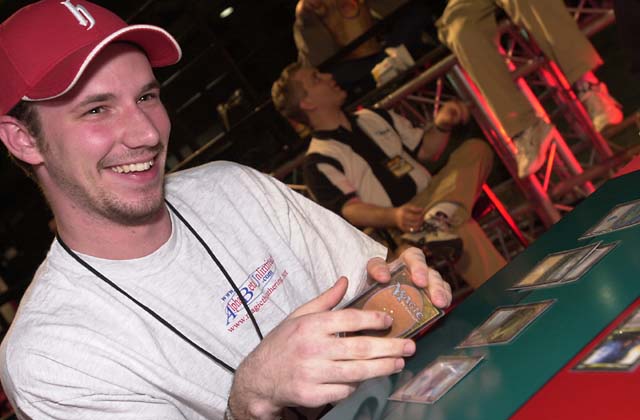 On his next turn Fuller thought for a while and commented "this will probably be my last play of the tournament" as he laid an Agenda of is own. Finkel used his Spite/Malice on it and Fuller used one of his favorite Disrupts. It didn't give him a real counter, but it did give him Meddling Mage, which he played naming Agenda. Finkel used Dromar to send the Mage home and then played his Agenda out anyway. Fuller played out a few turns, but he knew he was beaten and soon stuck out his hand.

The discussion after a match like this is often as interesting as the match itself. Finkel explained that his hand was quite weird and he felt he ad no choice but to drop his guard early. If Fuller had had black mana he might have been able to stave off those Recoils (and probably wouldn't have been felt forced to go for that awkward Fact or Fiction) and it could have been a completely different game.