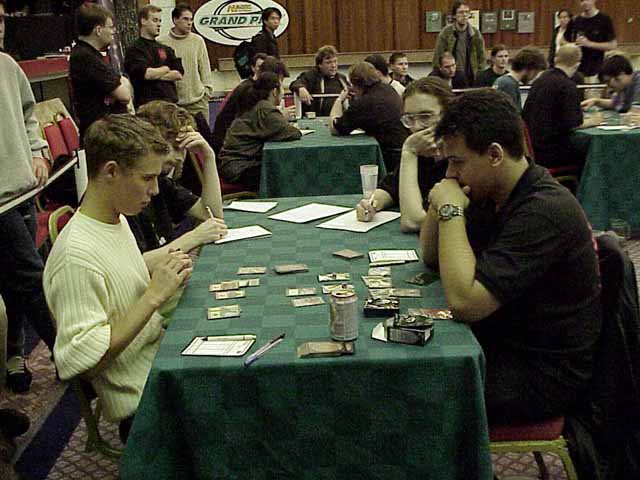 Justin had drafted fairly consistently, ending up with a fast black/red Kavu deck (9 Kavu!) with splash for blue. Noah had an amusing 5 colour green deck that he was agonizing over for quite a while before he constructed it, but he did have a reasonably safe green base with two Harrows, two Fertile Grounds and some mana elves.

Justin was already sitting down when Noah came along, but he was sitting on Noah's favourite side of the table and didn't feel like moving - and then the talk began. I have never seen Gary playing before and I guess I should have known that, being an American, he would have a fair few things to say, but Noah was up for it.

Justin really wanted to go first with his ultra-aggro deck, and was happy to get given the opportunity when Boeken won the toss. Noah had fair reason to do so though as he really needed not to get colour screwed if he was going to win the draft.

Despite his deck Justin manages not to make a creature until turn 5 (a Duskwalker with kicker). Luckily for him though Noah has made no early pressure but already has every colour mana he might need thanks to a Chromatic Sphere and a Quirion Elf. Justin seemed quite surprised that Noah was playing Plains. On his forth turn Boeken's Hunting Kavu got Excluded, so Gary was still at 19 (the Qurion Elf came over alone). The only other significant play at this stage was the Fires of Yavimaya that Noah had dropped on turn three.

The Dutchman's reply to the Duskwalker was an Alloy Golem (naming it as a black creature) which trundled over without summoning sickness to take Gary down to 15. Unperturbed, the American slammed a Maniacal Rage on his fear guy and whacked him back for 5, but had no other creatures to lay. At 15 each Noah then layed a Voracious Cobra and swung back for 7. At the end of turn Gary casts Fact or Fiction hoping it might swing the game in his favour, but it revealed 3 land, a 2/1 and a 2/2 artifact. Boeken (having a Zap in hand) really wants Gary not to take the 2/2 and hence splits the cards as such: 3 land and a 2/1 Sparring Golem. Justin takes the land and the Firebrand Ranger.

Slightly frustrated by the bad Fact or Fiction Justin slamms another Maniacal Rage on his Duskw alker and serves again leaving the life totals at 8 a piece, then he throws a 2/1 and a 2/2 on the table. Noah produces a Zap and an Agonising Demise and Gary sweeps.

Justin elects to go first, but again it is Noah with the early plays - a Quirion Elf (naming black) and a Hunting Kavu Aggressor. Gary makes his first play on turn 4 - an Ancient Kavu. Boeken then casts Harrow and then has the mana and land to cast Tribal Flames on the Kavu and attacks with his own. Yet another Kavu comes into play when the American replies with a Pouncing Kavu and hastes over for 3. Again the balance swings as the Alloy Golem comes into play on Noah's side, but things aren`t looking too bad yet for Gary as he lays a Duskwalker.

Then the Fires of Yavimaya comes into play and Justin is forced to double block the Golem. The enchantment is duly sacrificed and the board is left with only a Hunted Kavu on Noah's side.

The next few turns sees a Hooded Kavu join Justin's team and a Rooting Kavu on Noah's (Justin thankful that he could Plague Spores Boeken's Thunderscape Master), but this creature advantage was enough to run the Dutchman through to victory.