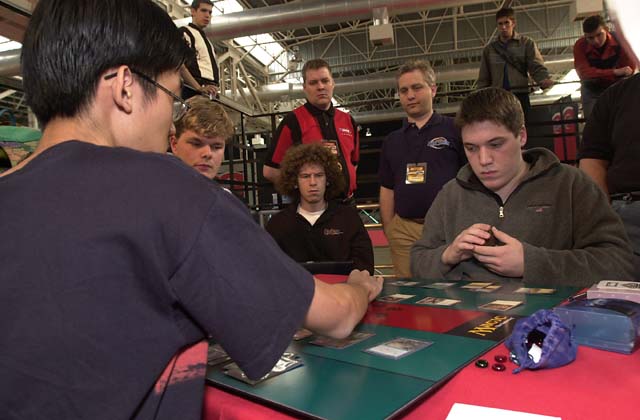 Kai Budde and Albertus Law had previously tangled in Round 13, and Law took the match. This forced Budde, who began the draft needing only one win, to play his last match under the gun. To miss Top 8 after such a spectacular start would have been a double-stack of sadcakes.

Budde, being Budde, managed to take the spot he'd seemingly earned, and now he was back for revenge.

Both players kept their opening hands, Budde summoning a turn-two Obsidian Acolyte, and followed it up with a Samite Pilgrim. Law spent his third turn cycling a Traveler's Cloak on Budde's Pilgrim, which drew a knowing smile from the usually grim Budde. The beatdown dance continued.

Law cast a Morgue Toad, and Budde thought about Excluding it, but between the Repulse in his hand and the Acolyte on the table, it wasn't going to be a threat. Law added a Stormscape Apprentice, and Budde Excluded immediately. This was fine by Law. His deck didn't grant him access to white mana! A spectacular ruse that paid off.

Budde untapped and dropped Benalish Lancer. Law's rejoinder was a kicked Duskwalker, threatening to race. Budde Repulsed it on his turn, drawing Stormscape Apprentice but unable to cast it right then and there. He attacked with his Lancer and Acolyte for three. Law replayed his Duskwalker.

Budde thought hard before granting his whole team protection from black and dropping Law to nine. He played his Apprentice with two white mana to protect it. Law played a mountain and took a moment before playing Magma Burst with kicker, destroying Budde's Acolyte and tapper. Budde gave him a thumbs-up. He knocked Budde to fifteen and tapped out to enchant the Lancer with Mourning.

Budde played Sawtooth Loon and chose to get rid of Hunting Drake and a land, his hand containing Razorfoot Griffin and Voice of All. He gated his Lancer back to hand, destroying the Mourning, and replayed it. Law gated a Cavern Harpy and replayed his Toad. 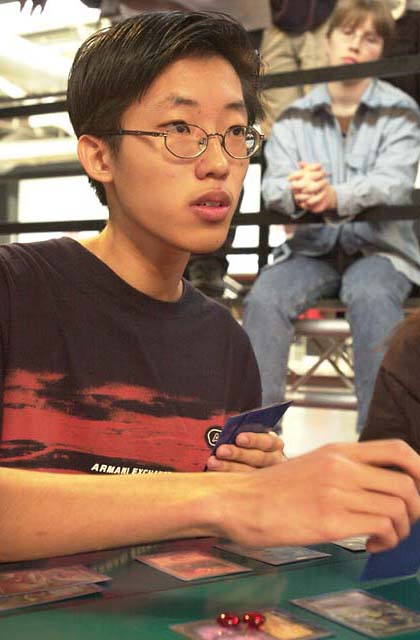 Still, Budde was well ahead. He pressed with Lancer and Loon. Law blocked with Harpy and Toad. The two ground-pounders traded, the Harpy bounced, and Budde used his Pilgrim to save the Loon. He shelled the table with Razorfoot and pro-black Voice. Six power worth of fliers to Law's eight life. Law kicked up a Vodalian Serpent and passed the turn.

Budde drew Dream Thrush and stared at the Serpent. Between it and the Duskwalker, Law's next attack COULD kill him, provided he could incapacitate two blockers. Budde decided those were slim odds, considering one of the three cards in Law's hand was Cavern Harpy, and went over the top with his fliers. He dropped his Thrush and passed the turn. Law attacked with his Duskwalker alone, and tried to act like the game wasn't over. Budde dispatched him with a quickness.

Law chose to play in Game 2. He made a Tidal Visionary and a Stormscape Apprentice, but they were completely stymied by Budde's turn-two Benalish Trapper. Law missed his third land drop and sighed, passing the turn. Budde cast Razorfoot Griffin.

His advantage mounted while Law scrambled for mana. He added a pro-black Voice of All and a Tower Drake to his lineup. Law's Collective Restraint kept the game from being a rout.

Unfortunately for him, Budde's position was strong enough that he could afford to pay for his Angel and Drake. He knocked Law to nine. Law mustered temporary aerial defense with Cavern Harpy and Urborg Drake, but Budde's tapper smoothed the way for his Razorfoot. 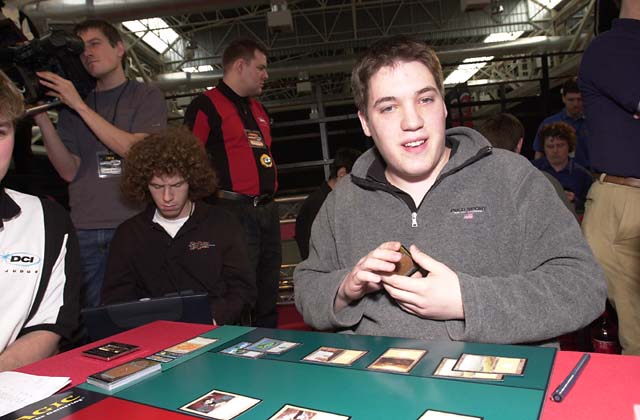 Law untapped and tried to put Mourning on the Tower Drake, but Budde Prohibited. The Urborg Drake couldn't help but send, and Budde tag-teamed it with the Angel and Drake. Law chose to kill the Drake, but could have instead activated his Visionary to make the Drake green, killing the Angel. He made a second Harpy, which was tapped at end of turn.

The relentless Budde swung with his fliers again, and now Law activated his Harpy to take down the Angel. Budde had Pollen Remedy for the save. Law made a Volcano Imp and put Cursed Flesh on the Razorfoot Griffin, but unable to answer the tapper and voice, succumbed.

Budde's game 3 opening hand wasn't as strong as the previous two. He came out with Sunscape Apprentice and Samite Pilgrim, but had no island to Exclude Law's fourth-turn Urborg Shambler. He drew it a turn too late.

Not that Exclude went to waste, it isn't exactly a carton of milk. It stopped Law's kicked Duskwalker. Budde took a four-point punch and steadied his defense with Darigaaz's Attendant. Law drooped Phyrexian Bloodstock. If not for his Shambler, a Harpy would mean picking off Budde's white creatures in slow motion.

Law sat back and let Budde summon Aurora Griffin and Hunting Drake without a play of his own. He drew Traveler's Cloak and decided to race, dropping it on his Shambler and going to town. It was fourteen to twelve in Law's favor. 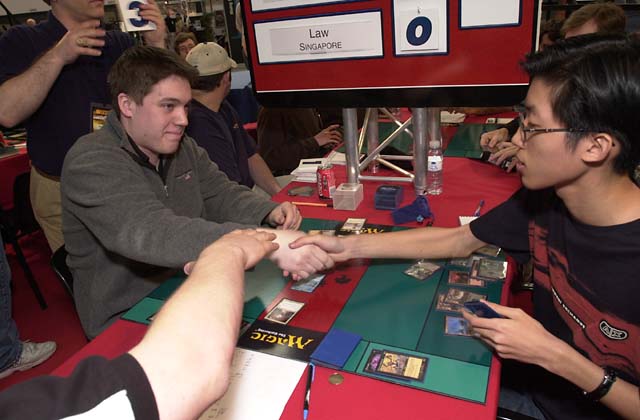 Budde swung with his Attendant and Fliers. The Bloodstock dove for the Attendant and axed the Griffin on its way out. Budde made a pro-black Voice and turned it over to Law. Law needed defenders to get in the three attacks that would win him the game, but his Shambler made it doubly difficult. He hit Budde to eight and made a Tidal Visionary.

Sensing victory, Budde brawled with all but his Samite Pilgrim. Law let it all through, falling to four. Budde sacrificed his Darigaaz's Attendant to purchase some insurance from Sabertooth Nishoba. Law triple-checked it, but he didn't have the tools to buy himself the one turn he needed. He extended the hand.