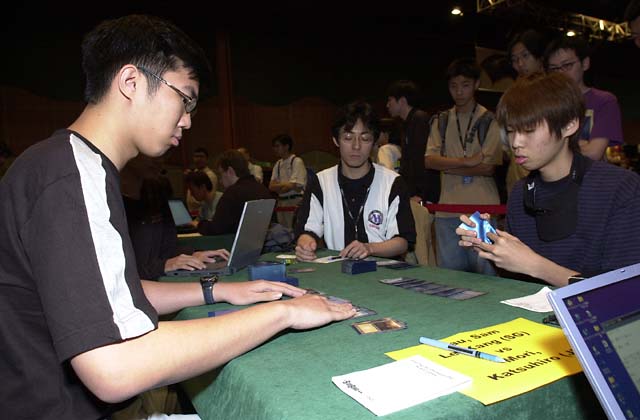 Both players played blue decks to claw their way into the Top 8 playoffs. However, while Lau employed one of four blue-white control deck designs that made it, Mori is using a rather unorthodox Nether-Go design, which he called "Morikatsu-Go".

Mori elected to go first, playing an Underground River to indicate a lack of blue mana. A second turn swamp confirmed Lau's suspicions while Mori was forced to use an early Accumulated Knowledge to fetch a much-needed island.

A Fact or Fiction gave Mori the option of three Absorbs, a Counterspell and an island. Lau took the Absorb-Counterspell pile, and discarded a Wrath of God on his turn, with full knowledge of the Nether Spirits in Mori's deck. Sure enough, Mori played a Spirit. Lau had a Last Breath ready.

Taking note of the three swamps that Mori had, along with just three other sources of blue mana, Lau decided to go for it. An Undermine from Mori met with an Absorb from Lau, and the Millstone entered play. Now, Mori was on a clock. With only two Recoils in his deck, Mori would have trouble removing the Millstone from play. An end phase Recoil met with a Counterspell, but Mori held the second Recoil, and tried to rid himself of the Millstone permanently with Duress.

Returning three islands to his hand, Lau played the only Thwart in his deck to stop Mori's attempt, but Mori was ready and countered back, allowing the Duress to resolve, and leaving Lau with a Wrath of God and four islands in hand. However, Mori still was unable to take advantage of the situation, holding just more countermagic in hand. Without sideboarding, Mori had many dead cards against Lau such as the two Vendettas in his hand of five cards, which really hurt him in this situation.

The second counter battle ensued over an Accumulated Knowledge from Lau, this time, for three cards. Unfortunately for him, Mori's Foil met Lau's Foil, and Lau drew the cards. That Knowledge granted Lau another Accumulated Knowledge and Fact or Fiction, which revealed two Dismantling Blows, a Millstone, an Absorb and a Story Circle. Lau chose the pile of four, containing everything except the Millstone. Both players knew that Lau only had one remaining Millstone in his deck, and since Lau's library was visibly smaller than Mori's Mori need only remove the third Millstone from play to win the game.

A library count revealed that Mori had 30 cards remaining in his library, while Lau had just fourteen. By now, Lau desperately needed his last Millstone in order to win the game, and if that Millstone was anywhere near the bottom of his library, the game would be over. As it turned out, the final Millstone lay within the last six cards of Lau's library, where he then conceded the first game.

Having lost the game where he had the advantage, it would be harder for him to break through. However, Mori had an interesting situation. He had full knowledge of the four Mahamoti Djinns that lay waiting in Lau's sideboard. Hence, apart from the lone Teferi's Response in his deck, he would be hard-pressed to find other cards to side out, in the event Lau decided to bring in his Djinns. 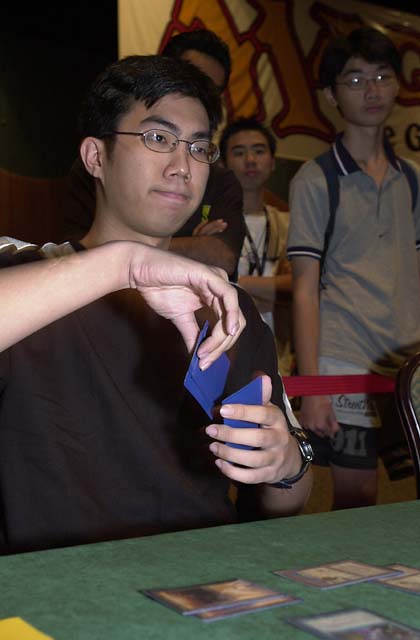 As it turned out, Mori decided to gamble that the Djinns weren't in Lau's deck, sideboarding out his Vendettas, Tsabo's Decrees and two Accumulated Knowledges in favor for his second Mahamoti Djinn, an Air Elemental, a pair of Crypt Angels, a pair of Gainsays and the third Duress. The gamble just about paid off, as Lau decided to bring in just one Mahamoti Djinn, as a precautionary measure, and perhaps to give Mori a scare. Should the one Djinn appear early, it would put forward the impression that the other three followed it in from the sideboard.

Lau chose to start first in the second game, opening with a Coastal Tower. This time Mori's blue mana did not evade him, as both players set out to develop their mana bases. Playing the first Accumulated Knowledge, Lau ensured that he would be able to maintain his lead, but a Recoil from Mori on Lau's Coastal Tower set him back a turn. The first person to miss a land drop was Mori, who then decided to discard a Nether Spirit.

However, when he cast an end step Fact or Fiction, he revealed a pair of Undermines, a second Nether Spirit, a Crypt Angel and an island after the ensuing counter battle. Now, Lau could ensure that at least one more creature would enter the graveyard, putting an end to the Nether Spirit resurrection. Lau decided to split the piles into Nether Spirit and Island, alongside the Crypt Angels and two Undermines. Mori decided to take the larger pile, sending the second Nether Spirit to join its compadre. Personally, I felt that it may have been better to split the piles into Nether Spirit, island and Undermine, or Crypt Angel and Undermine. A newly topdecked Duress from Mori revealed that Lau's hand contained Rout, a Story Circle, a Last Breath and an Absorb, taking the last.

With full knowledge of the Crypt Angel in Mori's hand, and with Mori tapped out, Lau cast the Story Circle. Thinking for a while, he interestingly decided to name "blue", instead of black, for Mori's pair of Mahamoti Djinns. The gamble paid off, as Mori did hold a Djinn in hand, but instead decided to cast a second Duress, this time nabbing the Rout. As Lau had no more countermagic, Mori then elected to replenish his hand with a pair of Accumulated Knowledges, for three and four cards respectively. This sent him way over the top in the card advantage war with Lau. Mori cast the aforementioned Mahamoti Djinn. An end step Recoil sent back the Story Circle, removing Lau's defense, and a second Mahamoti entered play.

Now Lau was desperate. With eight land in play, Mori still had two islands untapped to threaten a Counterspell, but at least Lau had the Circle in hand, with a Counterspell to defend it against Mori's Counterspell. Such was the plan. However, things don't always go as intended, and Mori held a Misdirection to fend off Lau's countermagic. Lau conceded the game at 9 life.

However, if there was any bright side to the situation, Mori still did not know which route to victory Lau had chosen to pursue as a primary objective. Now, down two games to none, it was do or die for Lau. Lau opted to relegate his fourth Millstone back into the sideboard, and replaced that with a second Mahamoti Djinn. Mori decided to bring back his Accumulated Knowledges, seeing how they helped him win in the second game, taking out his Dazes, which he (surprisingly) chose to leave in for the second game.

The tension was building up on Mori, who was still very flustered by the turn of events. Sensing this, Lau tried to ease the situation, saying "You're winning, don't be so stressed." With that, the two players embarked on their third game. Lau again decided to play first, eventually choosing to keep a hand that held two land and two Mahamoti Djinns. Mori kept his hand without hesitation. Lau played out his first two lands, but missed the third land drop, instead drawing a Millstone, which he played into a Counterspell from Mori. Mori continued to play out his land, but he, too eventually stalled at five lands - a lone swamp accompanied by four islands. At least his discard was easy: a Nether Spirit. Drawing a second swamp, Mori now had the capacity to cast Undermine twice, so he must have felt confident at protecting the Spirit. In the meantime, Lau also managed to increase his resources to six land, and was ready to Last Breath the Spirit, which Counterspell backup. Mori played one Undermine, but was reluctant to play his second Undermine, which would leave him tapped out, and Lau free to cast a Mahamoti Djinn. 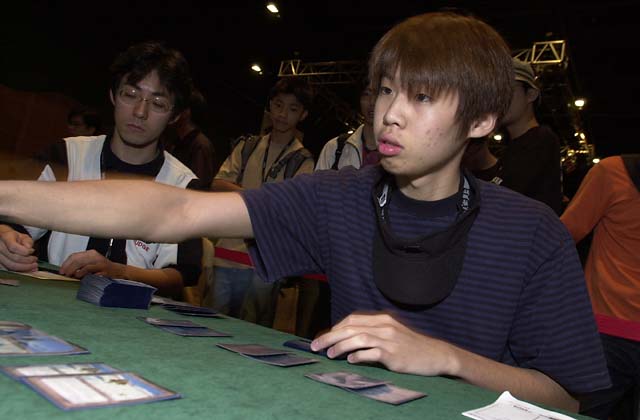 Instead, Mori played a second Nether Spirit, and this time Lau did not have the Last Breath, instead holding a pair of Wraths and a Rout to defend himself with. He did try to play a Mahamoti as testing material, which naturally met a Counterspell, and then tried to play a Millstone, which entered play. The fact that Mori did not counter the Millstone gave Lau some insight into Mori's intentions as either Mori was in the unlikely scenario of not holding any countermagic, or Mori simply felt that he could race Lau. Over time, the Nether Spirit managed to chip Lau's life total down to 6 life, before he managed to hold off the assault by milling away a Crypt Angel and then casting a Wrath of God, which Mori allowed. A Story Circle for blue stabilized the situation further and Lau looked to be regaining control of the game.

By then, both players had access to plenty of land. Mori then drew and played his one random Rath's Edge that was in his deck. A series of Fact or Fictions and Accumulated Knowledges made it painfully obvious to Mori that Lau held no countermagic, which left Mori free to play out his two Mahamoti Djinns to visit Lau all over again. At least Lau still had the Story Circle in play, until Mori Duressed, which met a counterspell, which he defended. When Lau did not counter any more and was down to just two cards, Mori resolved all the effects on the stack down to the initial Duress, where he then cast a Recoil on the Story Circle, which Lau discarded, showing Plains and Mahamoti Djinn. In a futile last ditch effort, Lau tried to cast his Mahamoti, but Mori countered it, whereby Lau showed the second plains that he drew and extended his hand.