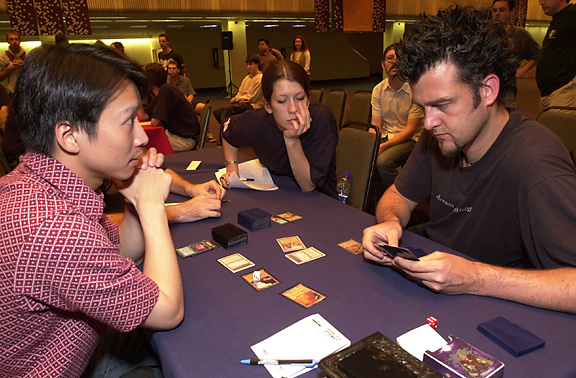 Kim Brebach is called a "dinosaur" because of how long he's been playing. He was at the first event ever in Australia. He's qualified for many a Pro Tour, but weighing the price of flying aganst the low low Australian dollar, had decided not to attend. He did make it to 2000 Worlds and played on the Australian team that came in 10th out of 50 teams.

Gordon Lin was Brebach's worthy opponent. Brebach is infamous in New Zealand for being really nice and a pleasure to play with. He's flagged for the under-1700 money and will be cleaning up since he is one of only two who made Top 8.

Somehow this match managed to take one hour and 45 minutes with Brebach playing CounterSilver against Lin's PandeBurst deck.

Game one started with Brebach; he cast Duress which took Lin's Force of Will. Brebach then laid a Muscle Sliver that almost won him the game. As the Muscle Sliver attacked, Lin was busy getting his combo in order. He first Demonic Consulted for Counterspell and then again for Intuition, while the Muscle Sliver got him down to five life. He then played Intuition for two Pandemoniums and Saproling Burst. He then cast Frantic Search and Replenish, which got the combo in play and killed Brebach.

This game opened up with Lin Force of Willing Brebach's Duress. Brebach successfully "undressed" Lin a second time and took Intuition, which he threw across the table onto the floor. Lin didn't flinch and Gordon apologized profusely.

After that, Gordon cast Crystalline Sliver and Muscle Sliver. He had Lin down to 12 when Lin decided he'd better use his Saproling Burst defensively. He then Force of Willed Brebach's Disenchant. His tokens would have killed Brebach if it weren't for the Worship that he played. The tokens soon faded away and Brebach was able to start attacking once again. Lin Pyroblasted the two new Slivers Brebach tried to cast, but still lost to the original Crystalline and Muscle Sliver.

Again Lin played Saproling Burst defensively and yet again Brebach cast Worship, only this time Lin successfully Force of Willed it. Lin continued onto Demonic Consultation for a Pyroblast. He followed up with a Duress taking Brebach's Pyroblast. Gordon beat him down to only 3 life when Gordon was finally able to turn the tables. He cast Replenish, which Brebach tried to Force of Will, and in response Pyroblasted the Force of Will. Replenish only retrieved Saproling Burst and the two tokens made attacked the next turn. The damage only brought Brebach down to two life, and if it wasn't for the Pandemonium in Gordon's hand, he would have died the next turn. However, he successfully cast Pandemonium and won the game.